'He is seeking to harness the power of Indian Diasporas to national (support for India in global capitals) and political (enhance the Bharatiya Janata Party's support base) ends.' 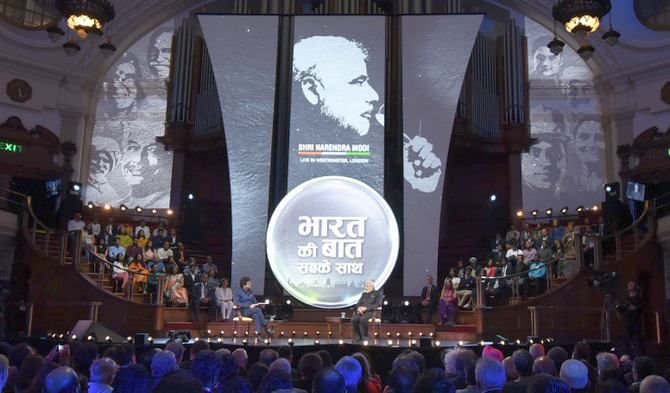 You have undertaken a detailed study of India's textile and pharma industries in the context of liberalisation.
In the process you have touched upon policymaking in trade and the politics around it.
Tell us a little more.

An Indian Rip Van Winkle, who went to sleep in the late 1980s or early 1990s and woke up in the 2000s, would have been astonished by the huge change in such a short amount of time.

In 1990, India was a hesitant economic power, withdrawn into a shell of isolationism and espousing economic nationalism.

In 2017, foreign trade drove half of the economy and Indian multinationals pursue global alliances.

India views the world differently today, but even more so, the world regards India in very different ways.

This book argues that global factors/markets and rules have disrupted the coalition of interests that supported an inward-oriented policy and pushed India towards a more globally-oriented agenda.

India can no longer be viewed through a purely national lens.

Globalisation is closely linked to the nationalist ambitions of a rising India.

The State has crafted a new strategy -- a new tradecraft -- that rethinks India's role in the emerging Asian and multi-polar world.

Indian State actors have shown the ability to carve out spaces of autonomy, despite the conditionalities imposed by globalisation.

This finding not only changes our understanding of India as purely internally-driven, but should also change the way we think of globalisation.

It also makes the Indian economy more vulnerable to external factors and shocks.

Paradoxically, India's participation in a rule-bound global trading system meant to inculcate free trade transformed the trading State, the direction of their trade policy, as well as domestic institutional developments.

The State's capacities have been augmented and its approach reoriented as a result of India's engagement with international rules and practices.

The trade bureaucracy, MOC, assists India's private sector in responding to the opportunities offered by the new regulatory regimes on trade in pharmaceuticals and textiles.

The State has also developed mechanisms of resistance for future trespasses on its sovereignty.

Essentially, India has adapted to rules on global trade and become more proactive in negotiations at the global level.

It is now in a position to reshape the global trading order.

This has a message for other developing countries that have always protested the hegemony of developed countries in world trade.

The textile industry was heavily unionised. Is there a relationship between the trade policy India pursued and the decline of trade unionism in this sector?

We know that the textile industry in India became sick around the 1970s and the sickness could be attributed to the pervasive unions.

We had the famous 1982 textile strike that was broken by the government, destroying the power of unions.

However, the sickness of the industry was also related to a larger set of factors, which had to do with State policy designed in the 1940s and 1950s.

This unleashed a nexus of interests between politicians, textile producers and a diverse set of companies, including the powerloom firms.

The sickness was largely the product of the neglect of large integrated firms by the government and the easy options adopted by older textile companies, which exited the industry.

Since the mid-1980s, trade unions have been weak and divided in the textile and garment segments.

My book documents the revival of the textile industry, but with a very different profile and face.

This has further undermined the power of labour.

Currently, the working face of the textile, garment and leather industry is very different than before.

Now, migrants, youth and women populate these industries, and while there have been some efforts to address their concerns, they are more difficult to organise.

The political economy of the licence-quota-raj period was thought to consist of coherent, large, class interests such as industrial class, professional and agrarian classes focused on seeking the State's largesse and subsidies to ensure domestic dominance and internal protection.

By now, India's political economy has transformed quite dramatically into a complex economy, with some sectors and classes tied to the external economy and others oriented domestically.

Internal differentiation within each economic class has become important.

The new economy is globally linked, but continues to seek the State's help to compete in the global marketplace.

That is interesting as liberalisation has not ended the mutual relationship between State subsidies and business lobbying!

Business actors, now, need the state to compete with global actors and create export markets. There

is greater pressure on all sections and groups to build external strategies and linkages.

Thus, the new political economy can be described as more internally integrated as well as globally linked.

A new developmental State has emerged with two faces -- one where the State provides crucial public goods (roads, ports and credit) and support and the other, darker face, that supports crony relationships with diverse business actors.

Given the Regional Comprehensive Economic Partnership (RCEP) trajectory, what are the trends for trade policy you visalise in the future?

My book focused on the World Trade Organisation and India, where countries like India but also Brazil and China have begun to defend their trading interests better.

In response, the action on trade has moved to regional trade agreements and preferential bilateral agreements driven by US/European Union desire to carve out regional arrangements, but also stimulated by a host of geopolitical and strategic concerns of developing countries.

RCEP is one such large network of trade. I anticipate that regional and bilateral trade agreements will continue to proliferate.

Do you see a relationship between the Diaspora and trade in Narendra D Modi's India?

I do see a relationship with Narendra D Modi's India, globalisation and Diaspora.

Broadly, new constituencies for a nationalist agenda give support to Modi.

Diasporas of Indian origin are one important constituency since the early 2000s when the US-India nuclear deal pushed by Manmohan Singh activated the power of Diasporas in the US.

Modi's regime has given a more nationalist fillip to the well-connected Diasporas, but this new nationalism is not anti-globalisation.

Globalism is being adopted and adapted by many diverse elements within India and beyond, but in nationalist ways.

This explains why Modi has visited so many countries. He is seeking to harness the power of Indian Diasporas to national (support for India in global capitals) and political (enhance the Bharatiya Janata Party's support base) ends.

Increasingly, global ambitions -- to make India more prominent globally -- have begun to factor into the calculations of Indian political actors.

This was evident even before Modi, but he is expanding this imperative. 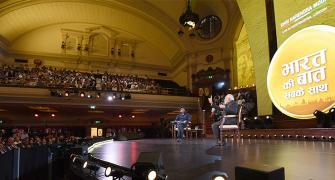 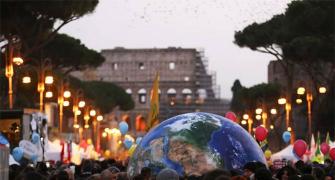 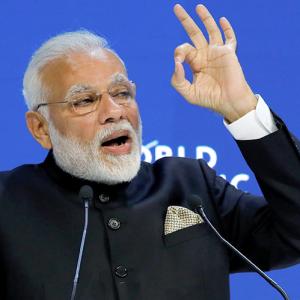 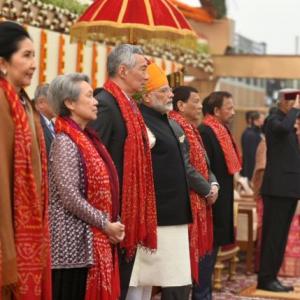