News
Business
Movies
Sports
Cricket
Get Ahead
Money Tips
Shopping
Sign in  |  Create a Rediffmail account
Rediff.com  » Business » 'What auto slowdown are you talking about?'

'The August phenomenon of decline in sales occurs every year.'
'What they have done cleverly is, using the economic slowdown as an excuse, they want a package from the government to compensate the expenditure they will incur while converting BS4 to BS6.'
'That's why they are making a hue and cry.' 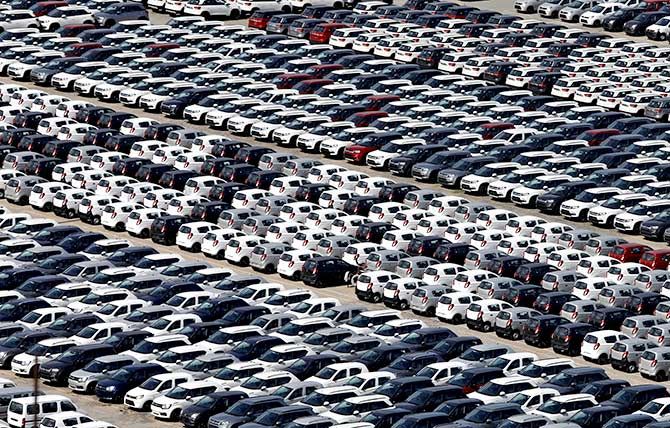 While everybody is talking about a slowdown in the auto sector, Praveen Khandelwal, secretary general, Confederation of All India Traders, declares nothing of that sort is happening in the sector.

"It is just a game plan of the automobile manufacturers," Khandelwal, below, tells Rediff.com's Shobha Warrier.

In August, sales of passenger vehicles witnessed the steepest decline of 41%, sales of commercial vehicles dropped by 39% and the auto industry saw an overall annual decline of 23.55%. But you say that there is no slowdown in the auto sector. Why?

There is a reason for that. Every year, during a certain period, there is a decline of sales in the automobile industry.

Now, the government has announced the implementation of BS6 for vehicles from April 1, 2020. At present, the vehicles manufactured in India are as per BS4 standards.

The automobile companies have enough stock of BS4 vehicles and inventories are lying in their production houses. But they will not be able to sell BS4 vehicles after March 31, 2020. Then it will become a dead inventory.

That's why certain manufacturers like Maruti have shut down some of their plants to stop the production of BS4 vehicles.

You mean because of lack of planning on their part that they are facing the problem of over-production?

Certainly. When the government has announced they are going to implement BS6 for vehicles, why did they produce BS4 vehicles in large numbers?

Now, they have to make certain changes in their existing manufacturing capacity, which needs a substantial investment. They do not want to spend anything in the existing inventory as it will add to their capital expenditure.

They have to also convert the BS4 vehicles to BS6 if they want to sell after March 31 next year.

When I spoke to people associated with the auto industry, they were hopeful of an increase in the sales during the festival season, but...

The sales will definitely increase and has increased. And they have enough stock lying in the market as well as in their production houses.

The August phenomenon of decline in sales occurs every year. What they have done cleverly is, using the economic slowdown as an excuse, they want a package from the government to compensate the expenditure they will incur while converting BS4 to BS6. That's why they are making a hue and cry.

Let me ask a couple of questions. If there is a decline in the sales of automobiles, why is it that Ola and Uber registered a growth of 10% to 12% every month?

Next, Mg Hector, that costs Rs 20 lakh, had a booking for 21,000 vehicles in the first week of its launch while the capacity of the company is to produce only 200 vehicles per month.

Tata Harrier at Rs 16 lakhs sold 50,000 units in the first three month and the waiting period is 3 months.

Hyundai Venue at Rs 16 lakhs has 50,000 bookings in first month and the waiting period is 6 months.

What auto slowdown are you talking about?

That's why I am saying that it is the game plan of certain automobile manufacturers to obtain relief and package from the government to compensate for changing the existing units.

What about Maruti closing some of its factories and Ashok Leyland, the second largest commercial vehicle manufacturer, announcing closure across its facilities?

Yes, there is a slowdown in the sales of the old models like Alto, Wagon R, i10, Santro, Indica, Figo, Indigo, etc. This only shows Indians are moving from ordinary cars to entry level luxury cars.

Similarly, sales of Volvo and Scania buses are increasing, but not the sales of the trucks and buses manufactured by Ashok Leyland and Tata.

If you look at the premium buses of Maharashtra and Karnataka state road transport corporations, you will see that they are Volvo and Scania buses and not Ashok Leyland or Tata buses.

So, instead of manufacturing new vehicles, the auto manufacturers are more eager to sell their inventory as they will not able to sell their present inventory after a certain period of time. That's why the closedown of some of their factories.

The auto industry contributes 49% of the manufacturing GDP and 37 million people are associated with it. Won't a slowdown in the sector affect the dream of achieving a $5 trillion economy in the next 5 years?

The auto sector is not the only contributor to the economy. In any case, people need vehicles and if they do not produce BS6 vehicles, some other multinational company will come to India and produce BS6 vehicles. So, it is up to them to rise to the occasion. Yes, when manufacturers are shutting down their units, obviously the ancillary units also suffer.

These manufacturers are shutting down their production houses not because of an economic slowdown, but because they have to sell the existing BS4 vehicles before the 31st of March 2020.

Representatives of the auto industry met the finance mnister and asked for a package to boost the sector...

The auto industry creates a big hype in the country that there is a slowdown and definitely it worries the government. That prompted the finance minister to talk about the problems affecting the auto sector.

It is yet to be seen what kind of booster they are going to get. So far, despite the statement from the finance minister, no booster for the auto sector has been announced.

GDP growth has now come down below 6%.

Yes, there is less business in the market because consumers do not have enough money in their hands.

In the last one year, we, the trading community across the country, are facing a slowdown in our businesses.

Now that the RBI has transferred Rs 1.75 lakh crore to the government, they can infuse more capital in the market.

How long do you expect it will take for consumers to have purchasing power and activity in the market?

When banks are not lending, there will not be money in the hands of the consumers.

In fact, the entire market is suffering because of a cash crunch. Only when capital flows in the hands of the consumers, will the market improve.

I feel by December, things will change and there will be good capital flow in the market.