How do you plan to correct the investor perception that Maldives is not a stable place to invest after the GMR incident?

The GMR case is a clear instance of this government's policy of a no-nonsense transparent and legal approach to foreign investment in Maldives. This exercise will boost investor confidence. The case of GMR is very sad.

GMR was misled by the (predecessor) Nasheed administration to signing a legally unsustainable agreement. From the day of signing, the Maldivian courts and the Anti-Corruption Commission were receiving complaints and cases against both Nasheed's government and the GMR venture.

During Nasheed's government, many fraudulent and duplicitous companies were either brought to Maldives or just browsed through local media as having some involvement in the development of Maldives. He (Nasheed) deceived not only GMR, he deceived his own people.

This government exhausted all legal options. It was the final court of appeal (the Supreme Court) of a neutral country that ruled in favour of the decision of Maldives to terminate the contract. Doesn't it give impetus to investor confidence?

Why did not the Maldivian government choose to renegotiate the terms of the contract, instead of abruptly cutting off the ties?

This government engaged. It appointed a high-level committee to negotiate with GMR to make sure all sticking points were resolved and an amicable solution reached. GMR was not forthcoming. All the while, it insisted on the ADC (airport development charge) issue, a non-starter without a Parliament approval.

How does the Maldivian government plan to pay the compensation? Do you think that Maldives is in a state to pay, when according to the Attorney General, the compensation estimates should be around $700 million, when the GDP of Maldives is around $2 billion?

I do not wish to go into the details of figures and numbers at this time. The government will conduct a forensic audit of the company and its finances, to establish the actual financial involvement of GMR during the time it was managing the airport. I would like to wait for the report of the auditors.

I think it's too early to talk about the rebidding but, yes, MACL will open tenders for major development projects in connection with the airport modernisation program. GMR is eligible to participate. I don't see any reason why Chinese companies should be barred from participating in the bidding process.

There is a buzz that China is at work in the Indian Ocean nation, to prompt the Maldives government to oust GMR. The logic of the buzz is, how else would Maldives pay the compensation to GMR?

This is a scare that smart Mr Nasheed is using to drill the fear of a China takeover of Maldives in this neighborhood. Mr Nasheed has advisors in India who help him to maintain the attention of the Indian government by using buzz words like China, Fundamentalists, Anti-Indian sentiments, etc.

I want to make it very clear that there is no such thing or thinking in Maldives, especially in the current government. Maldives is a Muslim state and has remained so for centuries. We have maintained excellent relations with India and have benefited from our good brotherly and neighbourly relations, both economically and diplomatically.

For a government, there are many ways of raising funds. The airport is a very lucrative business and I am convinced MACL will find ways and means of settling its dues. It has done so in the past and I don't see any reason it cannot in future.

Don't you think Maldives is being used as a pawn in the Indian and Chinese conflict?

Will the GMR exit also impact on the Tata Housing, Tatva and Patel Engineering investments in Maldives? 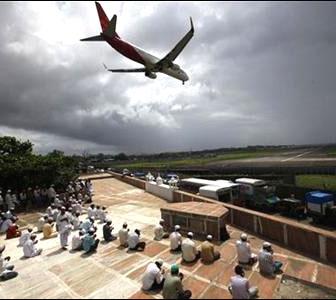 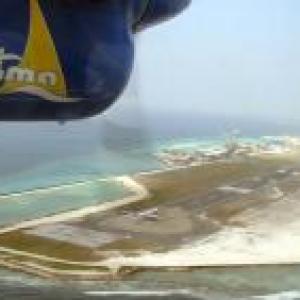 Male has authority to take back airport from GMR: S'pore court