News
Business
Movies
Sports
Cricket
Get Ahead
Money Tips
Shopping
Sign in  |  Create a Rediffmail account
Rediff.com  » Business » What economic crisis will do to India

'This encourages escapism through the politics and economics of nationalism, made worse by tribalism or nativism, the package accompanied inevitably by the erosion of institutional bulwarks and therefore State capture by powerful businessmen,' notes T N Ninan. 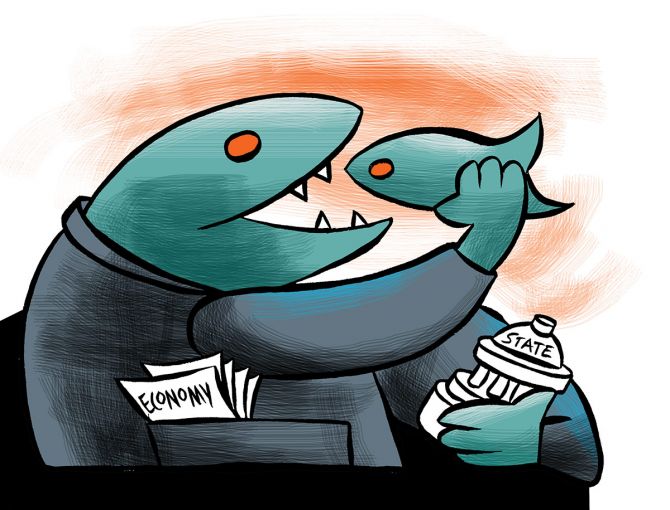 Amidst the flood of commentary that followed the finding that the world's fastest-growing large economy had become its fastest-shrinking one, an observation that stood out was that India's growth potential had dropped from 6 per cent to 5 per cent.

Now, it has been obvious for some time that India will emerge from the COVID-19 recession with a record fiscal deficit, record public debt (both in relation to GDP), a fresh lease of life for the 'twin-balance sheet crisis' confronting banks and companies, complex monetary challenges, and consequently reduced growth potential -- once reckoned at 7-plus per cent. But 5 per cent? Surely not!

Calculations of an economy's growth potential can be simplistic journalism (investment rate divided by the ICOR, or incremental capital-output ratio) or complex maths with many assumptions.

It is also intrinsic to a data-poor emerging economy that such estimates of growth potential comprise soft, not hard, numbers.

Still, no one until now had said that India's growth potential would be lower than the growth rates achieved in the 1980s and 1990s (between 5.5 per cent and 6 per cent).

If so, those rosy Brics scenarios would have to be radically re-cast.

Consider what that means: Surplus capacity in all directions, and a collapse of new investment.

Then there is that new letter to describe the future growth trajectory: Not V-shaped (a quick down and then up), as two optimistic government economists have forecast, or U-shaped (recovery after a time lapse), or W-shaped, or L-shaped, but K-shaped. This last has two lines diverging from a perpendicular.

It is this year's discovery by the global commentariat to describe what has been happening in varying degrees since the financial crisis of 2008: The growing gap between winners and losers among countries, economic sectors, companies, and, of course, people.

Examples are aplenty. Among countries, China has been on an incredible buying spree since 2008, gobbling up strategic companies and crucial ports across the globe, and liberally financing governments that become vulnerable to Beijing's diktats when they run into debt-servicing difficulties.

Within the country, investors in India's stock market are in clover while millions have lost their jobs and private consumption has collapsed -- as the National Statistical Office has just reported.

Companies servicing distance-working or -learning are having a heyday (more 'unicorns' and sudden wealth), as are the makers of pharmaceutical products, while the commercial real estate market and makers of formal office-shirts experience a slump.

Qantas has taken to selling pyjamas! Within sectors, the big are eating the small: Reliance Retail swallows most of the Future group, forcing the next in line, D-Mart, to adopt price discounting; and Adani acquires local airport monopolies and has a quasi-monopoly on ports (reflected in skewed port charges).

This phenomenon goes beyond Schumpeter's 'creative destruction' perspective on capitalism. How does large-scale destruction help if it overwhelms banks?

As Saurabh Mukherjea of the Marcellus fund house has been arguing, the concentration of profits in the hands of sector leaders has reached unprecedented levels.

Market regulators and the Competition Commission seem blind or comatose, compared to places like Europe and Australia where they are taking on the tech giants and their uncompetitive behaviour.

What we see are much broader elements at work than those stirred by a mere pandemic. The forces causing the growth slowdown and rising inequality were there before COVID-19, and these trends are now getting accentuated.

In a social welfare model, governments would take care of the losers among people while enabling small and medium businesses to keep going (think Germany's Mittelstand).

But increasingly governments don't have the capacity or the competence to deal with the scale of what confronts them.

This encourages escapism through the politics and economics of nationalism, made worse by tribalism or nativism, the package accompanied inevitably by the erosion of institutional bulwarks and therefore State capture by powerful businessmen.

Typically, the political and economic winners are not the same. Overall, it's not a pretty sight, and 5 per cent begins to look like a possibility.