News
Business
Movies
Sports
Cricket
Get Ahead
Money Tips
Shopping
Sign in  |  Create a Rediffmail account
Rediff.com  » Business » 'To get back to 6-7% GDP growth will take a couple of years'

'The current economic contraction is certainly due to the lockdowns as a response to the pandemic, which is an act of God.'
'Nobody has seen such a thing in the last 100 years.'
'Saying that this was an act of mismanagement is largely incorrect.' 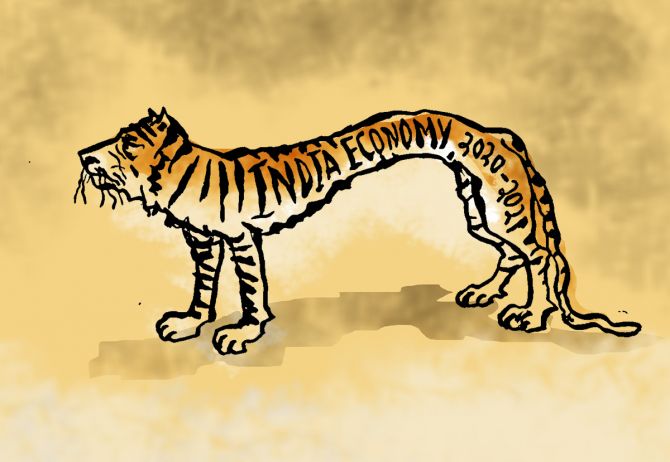 Official data released on Monday delivered a rude shock to the nation when it revealed that the country's GDP has shrunk by 23.9 per cent in the April-June period, the steepest ever such fall.

While many blamed the government for mismanaging the economy, it came as no surprise to Saugata Bhattacharya, chief economist at Axis Bank, who predicted the fall.

You were the only economist in India to predict that India's economic growth will fall by 24% in the April-June quarter, just a tad short of the actual 23.9%. How did you get it so accurately?

We got it right, quite accurately this time, other instances we are not as close.

There is a methodology that we use to track some of the indicators which we know that the National Statistical Office also use in their own estimation of GDP.

Of course, they have broader and wider indicators.

People may say it was a fluke, but the fact that our estimates of individual sectors like agriculture, industry, services, construction etc were also largely correct -- barring one or two that we got wrong -- suggests to us that we also read the method of construction of GDP correctly.

Where do you see India's GDP heading next year?

This was the worst quarter and that is understandable because there was a complete shutdown in April and stringent lockdowns in May and June.

The next quarter, too, we think, there will be negative growth, say, around -4 per cent, but this is the estimate, it is too early to say.

Once the numbers are out by September, we will get a clearer picture and a better idea.

For the year (FY 2020-2021) we are keeping a growth contraction of -6 per cent, but that can also change as we have to remember this is a public health crisis and the infections pattern can change.

S Gurumurthy, the RSS ideologue, said the 'nation stopped working. So no production, no income, no spend. Only if nation works but doesn't earn it is fall. It hasn't worked at all. It is like cut in pay for not working'. Can you comment on his view?

I completely agree with him. There was a total shutdown in April.

The April activity indicators we track were -50 per cent or more. It was not a lockdown, but a complete shutdown. Except for a few sectors in rural areas like agriculture and ancillary activities, everything was shut.

Do you think it was incorrect of the government to shut down the economy this way?

No. It is easy to judge in hindsight. At that point in time, it was probably the right thing to do.

Nobody had the slightest idea then what would be the pattern of the COVID-19 infection. You must remember it was lives over livelihood.

Social distancing, lockdown and other things were designed to flatten the curve. If that had not happened, then we have no idea what would have happened.

Evidence from other countries suggest that if we had not opted for a shutdown then we might have had many more cases rather than the daily 70,000 cases which we are seeing today. That would have been frightening.

Why is India's economy more affected than that of other countries?

India is a far more densely populated country than any other country, so the possibility of infections is much higher.

Shutdown and lockdown gave the healthcare system an opportunity to get ready with ICUs, ventilators and isolation beds, PPE suits and other measures.

That was the preparatory thing we did in March, April and May. Once the infection began to rise, we began to cope with the problem.

Can we say the economy's contraction was an act of God and not an act of mismanagement?

The current economic contraction is certainly due to the lockdowns as a response to the pandemic, which is an act of God. Nobody has seen such a thing in the last 100 years.

Saying that this was an act of mismanagement is largely incorrect.

What was the alternative? The answer is, none.

Only when experience started increasing, that this response works and that action does not work, did policy authorities start calibrating the extent of lockdowns in a prudent manner.

People were learning on the job and then the re-opening of the economy started.

Why is it that agriculture is the only sector to show positive growth of 3.4 per cent in the last quarter?

In March, April and May, the infection incidence was very limited in rural areas and in small towns and the government was not forced to shut down activities there.

Secondly, the migrant (workers) went back and that boosted economic activity in rural areas.

Thirdly, the government had been spending a lot in rural areas with programmes like the Garib Kalyan Yojana, MNREGA and others, gave lots of subsidies and funds in rural areas and that was very significant.

How will the common man's life change due to this GDP contraction?

This is in the past now and as Mr Gurumurthy said, when everything was shut down people had to stop working.

Indian people, generally the small kirana stores, tradespeople, and vendors selling on the streets, have come back to work.

People are adjusting. There is no doubt income was hit, but that is the case of the past.

The government too pitched in by giving cash subsidies to the lowest income families for a few months. Now we need to move ahead and restart businesses, but obviously, it will be a much tougher environment.

Will India see a V-shaped economic recovery by Diwali?

Too early to say, but by next year it will likely be a sharper recovery.

This year, FY20, we might get -6 per cent GDP growth. We have already started climbing up from the lowest point of economic activity, which was April.

But to get back to a sustained 6 to 7 per cent growth in GDP it will probably take a couple of years.

At this moment it looks like only the Government of India can spend money and boost the GDP. So what is stopping the government from spending more money?

The government is trying to make the best use of its limited resources.

When you get a -24 per cent drop in GDP, there is obviously a large income loss, and this negatively affects taxes and other revenues of the government. We see that in the government revenues data. So it constrains the government in spending.

Obviously, the government would like to spend more to counter-balance the private sector income loss, but where will it get the money from?

What about the Rs 20 lakh crore stimulus package? Didn't it help to arrest the fall in GDP growth?

Obviously, it has and is going to help over the course of the pandemic.

There are various parts of the Rs 20 lakh crore package. For example, the emergency credit loan guarantee scheme for loans to MSME (Micro, Small and Medium Enterprises). Rs 1 lakh crore has already been disbursed by banks under the scheme.

Government's direct spending has also gone up, the Centre has transferred more money to states for them to spend.

It has almost doubled the Budget allocation for MNREGA. It is also trying to incentivise more credit flow to MSMEs in particular.

All this will work, but will take some time for activity to stabilise.