The dollar’s preliminary moves after the low 80.90 are supportive of a like dollar rally back to 85.50. We should see confirmation of that in the early part of next week, says Sonali Ranade

US equity markets confirmed a correction by staging a minor pullback from the 38 per cent retracement level on the main S&P 500 index. There was some extra excitement in the Nasdaq [QQQ proxy ETF] following an eight pc rally in Microsoft welcoming Steve Ballmer’s retirement. The bear rally is unlikely to change the market direction in either Nasdaq or MSFT. It did give the bears a good scare, though.

The dollar’s preliminary moves after the low 80.90 are supportive of a like dollar rally back to 85.50. We should see confirmation of that in the early part of next week. Until that happens, other currencies are likely to just mark time. In particular the EurUsd pair appears pretty undecided about where it wants to go.

Commodities were showing an upward bias on a number of charts. While the rallies in gold and silver are the usual counter-trend rallies one would expect in a bear markets, the trends in copper and crude suggest commodities may be bottoming out. For both copper and crude, I have had to revamp my wave counts to take into account the inherent bullishness.

Nearer home the panic in UsdInr may have been overdone. Dollar rallied to a high of INR 65.50 which was my yearend target for the pair. On more sober considerations, I think the market will settle down for some consolidation above 62 but below 65.50. A rally in DXY would impart an upwards bias to the dollar in the rupee market but much of the rally up to DXY 85 is already in the price.

Nifty staged a routine pullback from the 5250 level after a near panic liquidation. However, that didn’t look like the capitulation that the market needs. I expect the downtrend to resume in a more sedate fashion after a brief corrective rally.

There may not be an early end to world bearish trends. Look to exit rallies and hoard cash for better buys later. 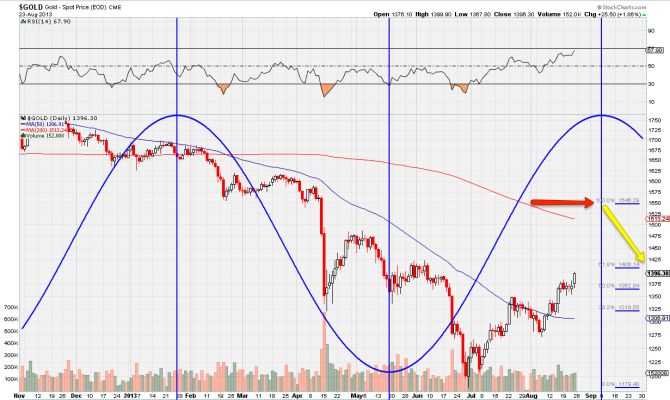 Gold: Gold rallied to a high of $1385.58 as expected, before closing the week at 1370.80. The bear rally in gold is not yet over and we could see gold rally higher to $1425 before it corrects for the price rise from $1180. But that correction is probably two to three weeks away. 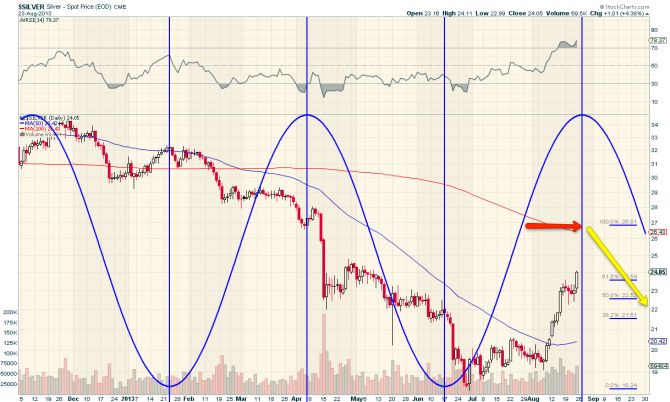 Silver: Silver too has been in a counter-trend rally from the low of $18.17 and made a high of 23.60 before closing the week at $23.1660. The bear rally may not be done as yet & the metal has the potential to rally to $26 before it corrects for the price rise from $18.17. The metal continues to be bearish in the long term. 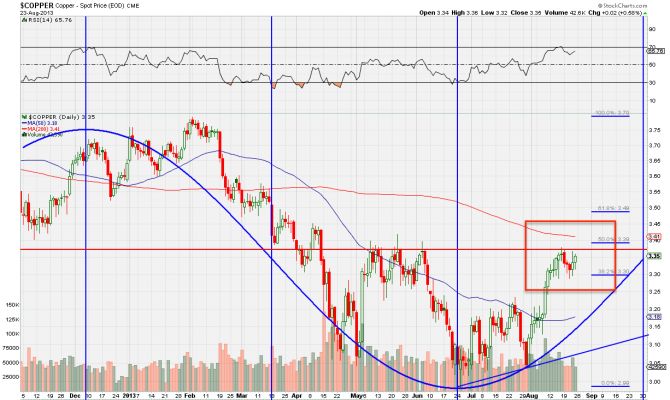 HG Copper: Have had to completely revamp my read on copper following its recent price behaviour. I now think the bottom of 2.98 formed on June 21 was the start of a new bull run in the metal that may see it reach for 4.0 by end of 2014. First confirmation of my revised read on the metal will come when it breaks [and sustains] above its 200 DMA and major overhead resistance at 3.4250. That could happen over the next two weeks. Upon confirmation of 3.4250 as the new support, we could be confident that the metal is in a new bull rally. In any case, as suggested before, there is no case for continued bearishness in the metal. 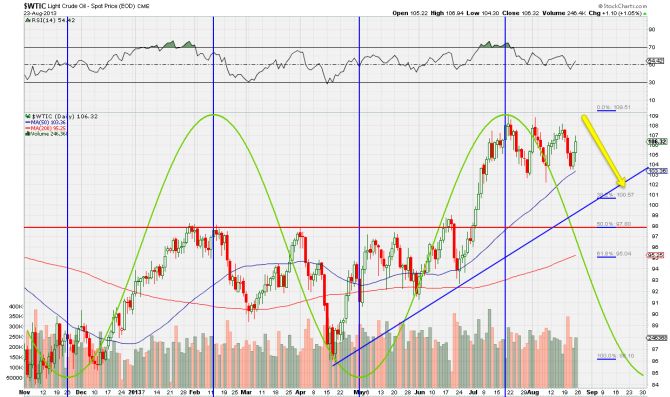 WTI Crude: As in the case of HG copper, have completely revised my wave counts on crude in line with recent price behaviour and revert to a simpler wave count. I now think the low of $77.41 on June 21, 2012, marked the start of another bull rally in crude which could see it head for the previous top of $148 by end of 2014. First confirmation of this scenario would come if WTI crude fails to breach support at $99 in the current correction. Crude bounced from its 50 DMA at $103.15 last Friday. Further confirmation would take time but follow when crude breaks atop $110 and sustains above it. My earlier scenario that called for a correction down to $92 before a significant rally is still possible but the probability of that has receded significantly following repeated bounces in the price from $103 area. Hard commodities in general are showing signs of reversing long term trends. Crude and copper being industrial in use may be the first ones to confirm the reversal in trend. US Dollar DXY: DXY closed the week at 81.53, just under its 200 DMA in the 81.60 price area. I continue to think the low of 80.8950 on August 8 marked the base from which a new bull rally in DXY has begun. First confirmation of this scenario will come upon a break above 82 and when DXY observes the 200 DMA as the new support for DXY. I think this could happen as early as next week.

A sustained rally in the dollar will certainly pressure commodities across the board. Given my read on copper and WTI crude, it will be interesting to see if these two commodities hold to their rallies despite a surging dollar. 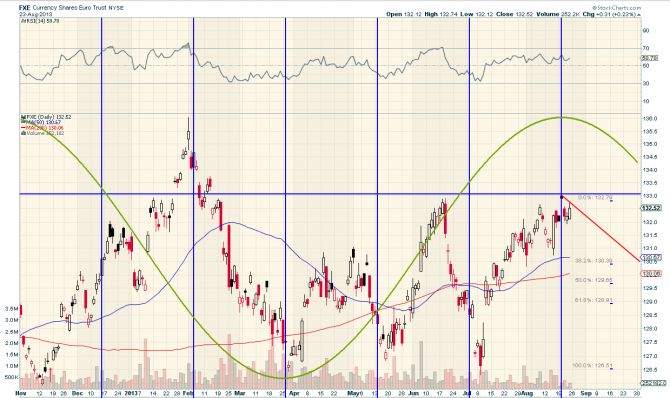 EURUSD: Not offering an opinion on EurUsd. 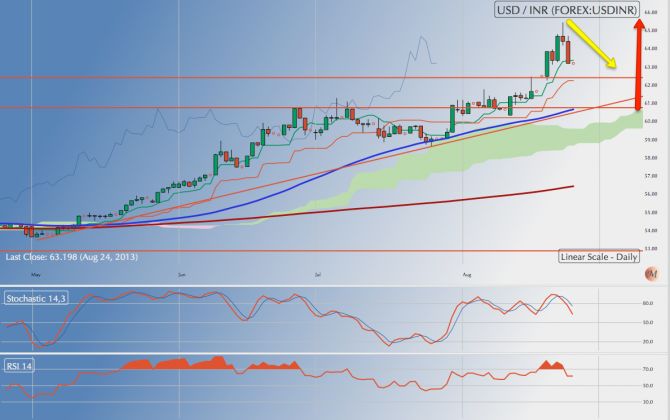 USDINR: The UsdInr made a high of 65.56 during the week, which incidentally my target for the dollar by the year end in rupees. The dollar closed the week at 64.55. My sense is that the dollar has overshot its immediate target due to acute panic in the eupee market and needs to consolidate for a while before its next move becomes apparent.

Expect the dollar to consolidate below 65.50 and above 62 for the next four to six weeks. A lot will depend of the contour that DXY follows in the international markets. I think a DXY rally abroad up to 85 may already be factored into the UsdInr although that would give the dollar an upward bias in the Rupee market.

In any case, the worst for UsdInr may have worked itself out of the system already. 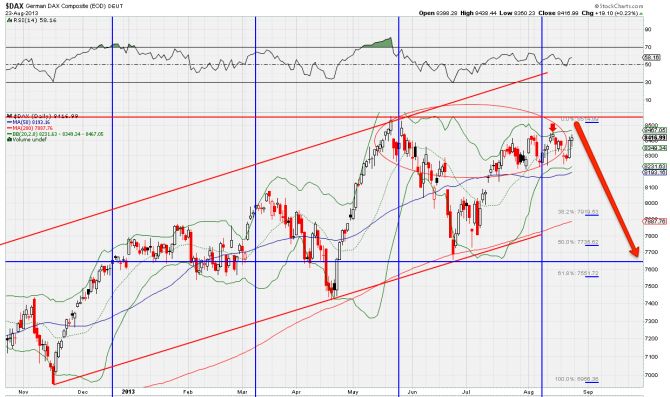 DAX: The DAX fell from 8438.12 to a low of 8300, just short of its 50 DMA and then corrected upwards to close the week at 8397.89. There is nothing on the charts that suggests that the downtrend in the index has reversed. I think the continues on its course to test 7650 support over the next few weeks barring normal pullbacks of the sort we saw towards the end of last week. 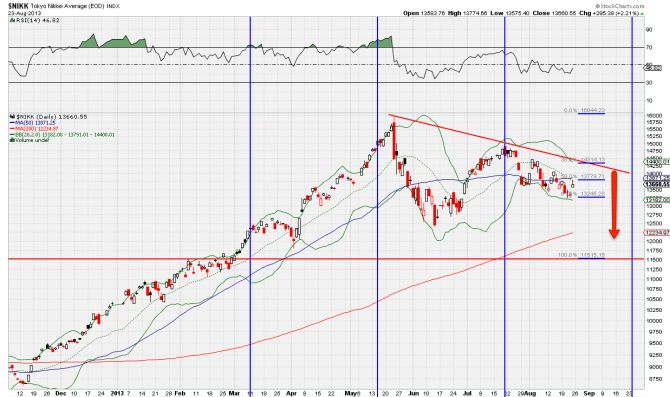 NIKKEI 225: The Nikkei closed the week at 13365.17 and continued its orderly decent towards 12500 price area which is also where its 200 DMA is positioned. No change in the prognosis. Nikkei remains in an orderly correction to retest at least the 12500 price area. 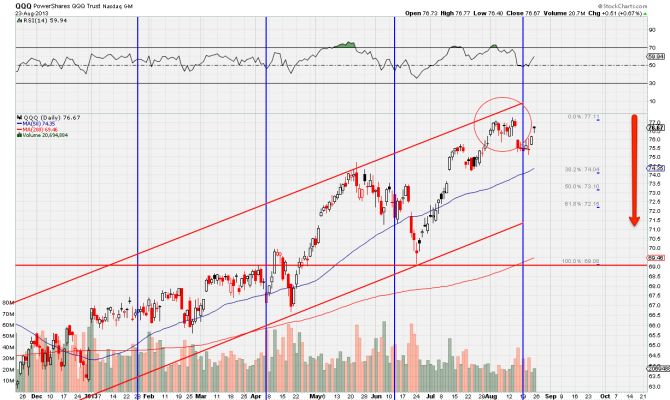 Nasdaq [QQQ]: The QQQ closed the week at $76.67 after making a low of 75 during the week. The pull-back in QQQ surprised because it filled the price gap at 76 in the charts, indicating a surprising strength in the index. That the pull-back gained from an eight pc rally in MSFT does not take away from the strength of the pullback.

That said, the index continues in its corrective trajectory towards 69.50. Only a decisive new high would negate the drift towards 69.50. 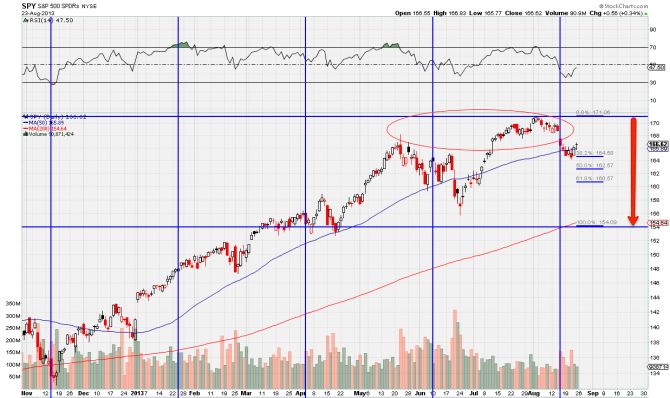 S&P 500 [SPY]: The SPY showed the true underlying trend in the US equity markets without being clouded by the bear rallies in FB, AAPL and MSFT. The share has dropped from 172.14 to the 38 pc retracement level before staging a modest pullback that may continue in the next week. The index remains on course to test 155 which is also is 200 DMA price area. 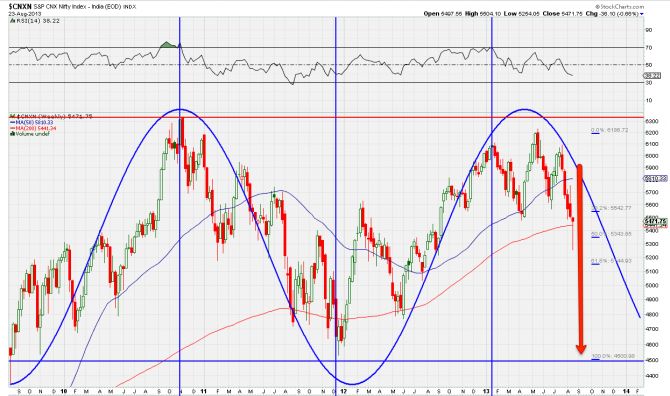 NSE NIFTY: The Nifty continued to be in a downtrend. It closed the week at 5471.75 after making a low of 5258 during the week under near panic conditions. However, the pullback from 5258 to 5458 is the usual corrective move for oversold conditions and nothing suggests that the downtrend has halted, much less reversed.

The corrective pullback may continue for a few days but expect the Nifty to resume its downtrend to the 4800 price area by end of the next week. I would be surprised if the Nifty does not test 4500/4800 before the current downtrend exhausts itself.