It is difficult to say if the banking sector will see the worst behind it by March 2020, warns Tamal Bandyopadhyay.
Illustration: Uttam Ghosh/Rediff.com 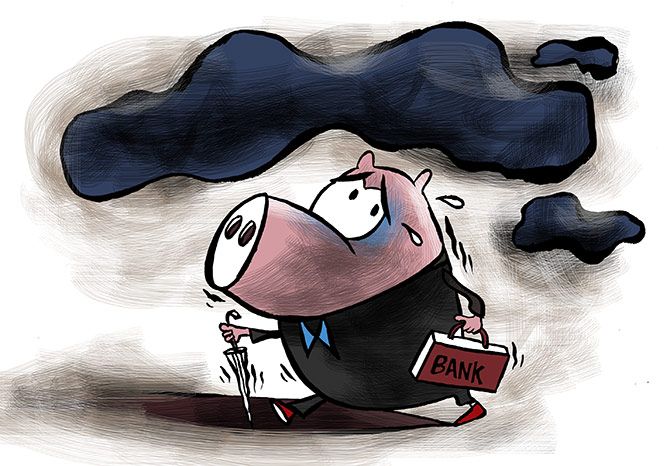 Speaking at the Hindustan Times Leadership Summit earlier this month, Prime Minister Narendra Damodardas Modi declared the emergence of India's banking sector from the crisis of the past, aided by a spate of recent reforms by the government.

Adding yet another dimension to the debate on the health of banks, RBI Governor Shaktikanta Das started his meeting with the chiefs of major public sector banks saying there has been 'some improvement' in the banking sector and the industry 'remains resilient even though current economic conditions may pose certain challenges'.

Modi announced imminent creation of a new framework which will presumably protect bankers from the glare of investigative agencies and encourage them to take credit decisions.

One of the contributing factors to the low credit offtake is a fear psychosis that has gripped the banking industry.

Most bankers are not excited to lend.

After all, who wants to be grilled by the Central Bureau of Investigation for loans disbursed years ago and run the risks of losing the retirement benefits or even being arrested?

Till the third week of November, the year-on-year bank credit growth has been 8%, roughly half of the previous year.

In the fiscal year 2020 so far, the bank credit has grown less than 1% in contrast to close to 6% in the corresponding period of last year.

Going by a recent report by rater Crisil Ltd, the expansion in retail loans, the driver of bank credit in the recent past, has been at its five-year low.

In the first half of the current fiscal year, the banks's retail loan portfolio has grown 16.6%, but the bulk of it is on account of buying loan portfolios of the stressed shadow banks.

Stripped off these, the growth in retail loans is 12%.

Collectively, all listed private banks have announced Rs 22,081 crore (Rs 220.81 billion) operating profit in the September quarter, about 37% higher than the year-ago quarter.

But for DTA, a few banks would have recorded higher profits.

Six in the pack have made operating losses.

The same six -- including usual suspects Indian Overseas Bank, IDBI Bank Ltd and Uco Bank -- have made net losses too.

This is one-third of net losses made in the year-ago quarter.

A higher net interest income and treasury profits have contributed to the rise in profits.

The net interest income of private banks has risen 20%, riding on 15.2% growth in advances.

The public sector banks's net interest income has gone up around 17% on close to 8% credit growth.

Overall, the advance portfolio of the industry has grown 10.34% and net interest income 18.34%.

The private banks have scored over the government-owned banks when it comes to deposit accretion also.

Their deposit portfolio has grown 19.26%, more than double that of public sector banks.

The incremental growth in India's government-owned banks's advances and even deposits has been far lower than private peers, paving the path for privatisation by stealth.

In absolute term, the gross non-performing assets of private banks in the September quarter have been Rs 1.39 trillion -- 12% higher than what they had in the year-ago quarter.

The corresponding figure for the public sector banks is Rs 7.79 trillion, close to 8% lower than the year-ago quarter, Rs 8.45 trillion.

The pile of the gross bad loans of the industry in the September quarter has been Rs 9.18 trillion, 5.25% lower than the year-ago quarter and little over a quarter per cent less than the June quarter.

After setting aside money for the bad assets, the net NPAs of the private banks have been Rs 52,635 crore (Rs 526.35 billion), marginally higher than last year.

For the public sector banks, there has been a sharp drop in net NPAs over the last one year -- from Rs 3.97 trillion to Rs 2.86 trillion.

For the industry, the net NPAs have come down roughly one-fourth in the past one year -- from Rs 4.49 trillion to Rs 3.39 trillion.

Can India's banking sector put the worst behind it by March 2020?

Bad asset resolution is gaining momentum and many banks have been aggressively providing for such assets but the turning point is not on the radar as yet.

Commercial banks's exposure to stressed shadow banks will add to their bad assets and there could also be nasty surprises of RBI inspectors finding more bad loans swept under the carpet.

With the bond prices falling and yield rising, treasury profits will be less and there could be even losses if the yields rise further.

Finally, many public sector banks are busy putting in place the building blocks of consolidation.

The employees of those banks that are being merged with others are more concerned about their career than lending to boost economic growth.