'The finance minister in her Budget speech should spell out how exactly she intends to get back to the 7% track, and the hard decisions she intends to take in order to adjust to the realities of a slowing economy until growth momentum returns,' suggests T N Ninan. Among the first things that a finance minister has to do when framing the Budget is determine the likely growth rate for the economy in the year to come.

The revenue, deficit, and other numbers depend on getting this foundational number right.

In the current year, for instance, some of the serious errors in estimating revenue could have been avoided if nominal GDP growth (for example, real growth plus inflation) had been correctly estimated.

What of next year?

Correct forecasting depends on an accurate reading of past trends.

The decade till 2020 will have seen the economy more or less double in size -- implying annual average growth of about 7%.

But the middle years of the decade saw the economy benefit from the growth spurt triggered by an oil price collapse -- something that will not repeat.

Besides, the current global economic situation is not encouraging; there are too many things to set right in the domestic economy, not least in the financial sector; exports are stagnant; and there is little scope for either fiscal or monetary policy initiatives.

Bearing in mind that the non-government part of the economy grew by no more than 3% in the last quarter, a realistic growth rate for the economy next year should be something like 5%, give or take half a percentage point.

That is not flattering for an economy that has clocked 7% in the previous decade, and even faster growth in the decade before that.

But one of the things that acceptance of a modest growth figure necessarily forces on you is hard choices.

One can't assume a return to mean, and assume revenue based on an economy growing at 7%.

If the money is not going to be there, it's better to face reality -- especially the reality of the Budget, in which the deficit is massively understated by about 2 percentage points of GDP.

All Budgets face resource restraints, but the coming one will have to confront them in their full severity.

Looking beyond the Budget, the medium-term outlook looks decidedly cloudy if growth takes time to return to the desirable 7%.

The finance minister in her Budget speech should spell out how exactly she intends to get back to the 7% track, and the hard decisions she intends to take in order to adjust to the realities of a slowing economy until growth momentum returns.

Predictability in government actions is a virtue in itself.

Insofar as revenues fall short, the axe will have to come down on expenditure -- even though this is not what economists might advise in the midst of a slowdown.

It is important that budgetary discipline be seen to be operating.

And so outlays will have to be pruned, or kept at current levels.

The sectors that have absorbed so much of public investment should be asked to show results -- as railway revenues, highway tolls, higher power tariffs, and so on (internal and extra-budgetary resources, as they used to be called in Planning's heyday).

If the finance minister looks hard enough, she should be able to find scope for more non-tax revenue measures.

For instance, fresh capital for the government-owned banks should come from the revenue garnered by privatising one or two of them -- the taxpayer should not be saddled with the burden.

Above all, the time has come to modernise budgeting.

Chiefly, that should mean moving from cash accounting to accrual accounting so that bills that are due but not yet paid are accounted for.

Similarly, the government should put out information on off-balance sheet issues that are not there in the Budget.

This will prevent further reports by the comptroller and auditor general pointing out hidden items of expenditure -- like public sector companies borrowing money from banks to pay the food subsidy bills, or taking advance payment from railway entities to avoid showing a loss in railway accounts.

A more credible set of numbers will be a good thing in and of itself, it will also help make government functioning more transparent. 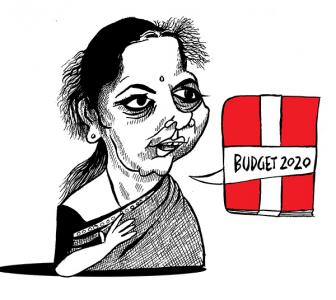