'The solution is to enable a graceful transfer of the deposit and funding 'franchise' from capital-deficient firms to capital-surplus firms.'
'This will expand credit intermediation, bring down its costs, and put the financial sector on a definite path of recovery,' argues former RBI deputy governor Viral Acharya. 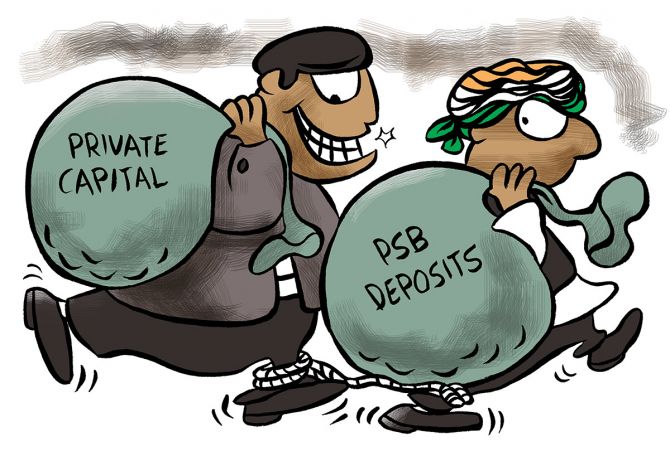 If there were to be macroeconomic stress that results in a 40 per cent correction to the global stock market over the next six months, would India's financial sector be able to survive and continue to provide efficient intermediation to the real economy?

The answer to this question depends upon the level of equity capital in the financial sector's balance-sheet relative to its non-equity liabilities, factoring in the impact of equity losses that are likely to arise in such a 'stress test'.

Why the focus on equity capital?

The reason is that only well-capitalised banks and non-banking financial companies (NBFCs) have incentives to lend well and at reasonable rates to healthier parts of the economy; under-capitalised ones remain busy either ever-greening -- doing 'extend and pretend' of loans to their legacy non-performing borrowers ('zombie lending'), or simply investing in government bonds hoping for interest rates to decline ('lazy lending').

What has also been documented extensively in banking research is that it is misleading to focus on regulatory or accounting notions of equity capital, especially under stress. The reasons are many.

Such forbearance makes book value of capital slow-moving relative to its true economic value, a phenomenon that gets reflected in low market-to-book ratios.

The joke goes that all banks that failed during the global financial crisis had adequate regulatory capital!

Second, book values of capital do not reflect the erosion of growth potential of a bank or NBFC in stress times.

In particular, they do not capture in a timely manner the loss of confidence among counterparties, depositors and investors that arises when the financial firm starts losing capital in an economic sense.

These issues affect market values of capital to a much lesser extent. While market values may in short periods be frothy or excessively depressed, they typically do not hide stress once it has materialised in a palpable manner.

Since the global financial crisis, my colleagues and I have been estimating measures of capital shortfall of financial firms on a daily basis were such a stress scenario to materialise.

We estimate downside exposure of a financial firm's equity returns to aggregate stock market declines, using state-of-the-art econometric methods that capture the notion that volatility and correlations both rise during stress (the risk that risk will change').

Next, using the knowledge of balance-sheet data on non-equity liabilities (retail and wholesale deposits, commercial paper, bonds, etc), we assess which firms will have an equity capital shortfall under stress relative to a requirement of maintaining it at a minimum of 8 per cent of the balance-sheet.

Firms that do not have a capital shortfall are in 'surplus'; for ones that are 'deficient', we obtain a quantitative measure of the shortfall.

Several salient features stand out upon examining the details:

This tragically meteoric rise coincides with the boom-and-bust cycle of bank lending that accompanied the post-GFC fiscal stimulus.

2. Barring a few short-lived periods of improvement, the financial sector's capital shortfall has remained at an elevated level during 2014-2020; it has simply not reverted to the healthy pre-GFC phase -- the financial sector is not yet on a definite path of recovery.

This stagnant phase coincides with the 'silent crisis' in which credit growth for the economy has been anaemic due to zombie lending and lazy lending, notably by public sector banks (PSBs).

The post-demonetisation boom-bust cycle of NBFC lending has only accentuated this problem.

3. Digging into estimates for individual firms, the top 15 capital-deficient entities (out of the 45 entities we track) are all in the public sector (12 PSBs, two power finance companies, and one housing finance company), whose capital shortfall together constitutes more than 90 per cent of the aggregate shortfall.

4. At the other end, the top 15 capital-surplus entities are all in the private sector; collectively, their capital surplus is greater than the deficiency of the rest of the system.

This is consistent with their higher profit margins and market-to-book ratios, and persistently lower ratios of non-performing loans to assets.

Interestingly, in spite of being surplus, these are the firms that have raised equity capital to guard against COVID-19-induced losses.

Herein lies the answer to what needs to be done about India's financial sector.

Public sector financial firms have access to deposits and other forms of borrowing, but no longer have adequate profit margins and equity capital to lend well.

There is some such migration -- 'slow run' -- at work, but it is too slow to prevent India's growth potential from slipping away.

The solution is to enable a graceful transfer of the deposit and funding 'franchise' from capital-deficient firms to capital-surplus firms.

This will expand credit intermediation, bring down its costs, and put the financial sector on a definite path of recovery.

To start with, the government must prepare a significant plan to:

i Divest government stakes in public sector banks (PSBs) below majority;
ii. Improve governance and management practices at PSBs by distancing itself from their operations;
iii. Re-privatise some of the healthier PSBs by divesting its stakes fully; and,
iv. Prioritise business models of the weaker PSBs by requiring them to specialise in profitable and socially valuable intermediation such as micro-finance, paving way for their improved market valuations and re-privatisation in due course.

While mergers reduce the number of public sector entities, they do not address the issue of the economic size of the sector and associated fiscal risks.

It also can't just be a one-off 'tick-the-box' cosmetic exercise in the form of divestment in one or two of the smallest PSBs; it needs to be a comprehensive and well-calibrated strategy that ushers in private capital and expertise for the entire sector.

Notwithstanding the magnitude of estimates I have presented, they also suggest that if the government puts in place a credible divestment plan for PSBs, some extremely well-capitalised suitors exist within the set of private banks in India.

In my recently released book, Quest for Restoring Financial Stability in India, I observe that this was a key item on my checklist manifesto when joining the Reserve Bank of India as a deputy governor in January 2017.

Is this an idea whose time has finally come? 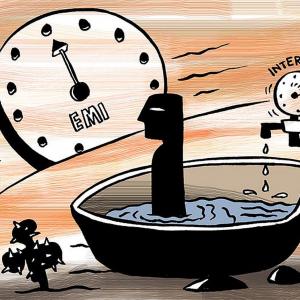