News
Business
Movies
Sports
Cricket
Get Ahead
Money Tips
Shopping
Sign in  |  Create a Rediffmail account
Rediff.com  » Business » '2 years is fair time for companies to come out of pain'

'The economy is expected to bounce back and things are expected to recover faster than what we previously thought.' 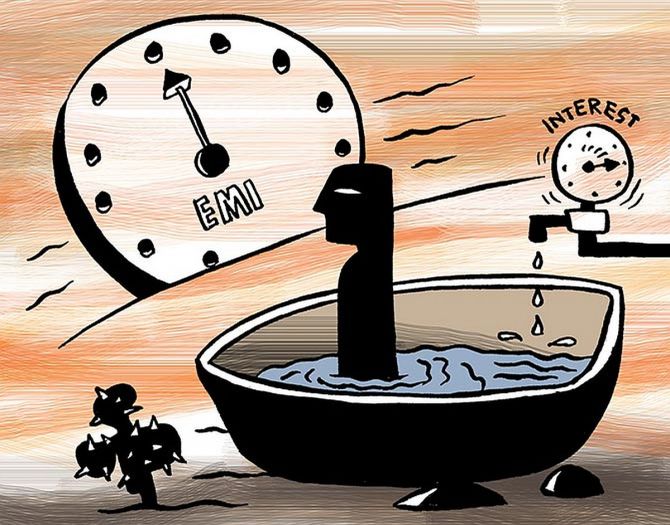 The two-year period for the debt restructuring of firms hit by COVID-19 is reasonable, as things will be back to normal in this time frame, predicts K V Kamath, bottom, chairman of the Reserve Bank of India's expert committee on a one-time loan recast.

Kamath tells Abhijit Lele/Business Standard that challenges faced by non-banking financial companies should be dealt separately by the regulator.

The panel held interactions with representatives of various industry segments impacted by the pandemic. What is the extent of pain?

Economic growth in the first quarter was negative.

The pain experienced by the system is also consistent with that. So, there are no surprises.

Pain is reflected in the loss of sales and the drop in profits.

What is your assessment of the kind of support required in the form of restructuring?

There is a significant amount of investment that should not have problems, going forward, and should do well.

This covers the entire agriculture space, fast-moving consumer goods, renewable energy, and anything that is consumer-facing such as pharma.

Then there are sectors that have seen pain, such as power, real estate, and construction.

The rest of the sectors are largely in the middle category, which will need some handholding.

The economy is expected to bounce back and things are expected to recover faster than what we previously thought.

The outline of the scheme (for the debt recast) that the RBI has put in will be very useful for getting companies back on track.

Within the moratorium period of two years, we should see a large part of them coming back to normal with the handholding that banks could provide.

Going by the estimates, more small- and medium-sized enterprises will need recast support.

Large units may need less since much work has happened after the asset quality review. What's your take?

There is a separate package for the MSME sector.

MSMEs depend on large companies as part of supply chains. Without large companies, which are going to be the market for MSMEs, being in good health, they (MSMEs) will have a problem.

That is linkage. We are talking of companies above the MSME threshold.

With that, the entire spectrum of companies is being addressed.

A large number of companies have suffered a double whammy (those which were already under stress before Covid). Will this become a challenge for banks to decide as to which case to take up?

The first test is these assets should not have overdue above 30 days as on March 1.

Second, as a result of Covid, their operations deteriorated in the subsequent quarters.

I would think that banks have a rather simple test to measure if a company is eligible or not.

The RBI has structured it (the scheme) very appropriately, so that there is no second guessing by banks as to what the intent was.

strong>How do you see preparations of banks to deal with work based on their experience with large stressed firms in the last five years?

This time around they are going in for a different kind of restructuring, as historically whenever such an exercise was done, the company was into a priori distress and then you looked at restructuring.

Here, there is no a priori stress. The distress is due to the Covid pandemic.

The assessment is that in space of two years, these companies can come back to normal.

Handholding (restructuring) is for that period by which time they should come back.

After having looked at what is happening in the real economy, my own assessment is that the second quarter performance (Q2Fy21) is expected to be far better than that of the first quarter.

I think two years is fair time for companies to come out of the pain.

What panel has suggested is for the banking and financial sector to deal with corporates. But the pain is for the economy as whole.
What are the steps you would advise for the system and to enhance the effectiveness of the recast?

The dramatic drop in capacity utilisation by corporates contributed to the negative GDP.

I think this time what the government has done through various schemes is to address the pain at the lowest link -- individuals and companies.

NBFCs are not eligible for restructuring while they may carry out a recast exercise for some companies to whom they have lent. That creates certain anomaly. How do you see it?

There could be an entity where bank and NBFC both have given loans.

The bank would restructure its loan and that would facilitate efforts to address the pain in the system.

My position is that banks should be major lenders and when they restructure the loan, the pain gets alleviated.

I get your point they are also borrowers and lenders.

The first leg of it (borrowers) is outside of our preview.

The regulator will have to look at the NBFC part separately.