Twelve trade unions leaders including the state secretary of the Centre of Indian Trade Unions (Citu) in Tamil Nadu were released this week after being kept behind bars for three weeks following a strike by workers of multinational giant Foxconn.

The reason: workers were demanding that their Citu-affiliated union be recognised by the management for all labour-related discussions. The subsequent strike led to 400 arrests.

Their offence was to seek rights enshrined in the Trade Union Act and the Industrial Disputes Act besides two international conventions of the International Labour Organisation (87 and 98): to form a union or freedom of association and collective bargaining.

Almost simultaneously, workers of the MRF United Workers Union (MUWU) were arrested by the police in Tamil Nadu for raising the same demand.

The refusal of managements to recognise trade unions has been the trigger for successive instances of industrial disputes. Two years ago, a workers' agitation in the plant of Graziano Italiano in Greater Noida over the refusal to recognise a workers' union ended with the company's managing director being killed.

All these disputes highlight the legislative gaps in workers' freedom of association as well as India's reluctance to ratify international labour conventions on the issue.

According to an International Labour Organisation (ILO) analysis authored by Ramapriya Gopalakrishnan, both Part 1 and 2 of the Industrial Disputes Act speak of "recognised unions" and "certification of a bargaining representative", but the Act does not prescribe procedures for recognition and certification. The Trade Union Act, 1926 does not address this issue either, she says.

In practice, this has resulted in employers ignoring or by-passing representative unions and entering "agreements or settlements" with employer-established trade unions or individual workers. This undermines the collective bargaining rights of workers and, eventually, threaten industrial peace, the ILO paper says.

According to N Prakash, who heads the MRF union and represents the union in the Supreme Court, the recognition of representative unions is about inclusive development, so non-recognition is contrary to the inclusive growth the prime minister talks about. MUWU has approached the ILO with a complaint against the management for not recognising the union. This is despite the Madras High Court saying it was the employer's

duty to recognise the independent and representative union.

Since there is neither a law for recognition of trade unions nor a procedure to verify membership, it is not necessary for an employer to go by secret ballot to verify the majority union. This leads to disputes between unions on which one is more representative, a loophole that the companies seem to be exploiting.

Speaking off the record, company representatives say it should be their prerogative to decide which union to recognise. Besides, they add, there are internal grievance redressal mechanisms to address workers' demands. "The company belongs to the management that has invested in it. But for the investment, there would be no work and no worker. So why shouldn't the management decide who to talk to?" one representative said.

Companies in Tamil Nadu add although the state does not have a law for trade union recognition, 90 per cent of companies have unions. And since companies talk to them, it amounts to recognition, they say.

The managements say it is union brinkmanship that is leading to problems. Each one wants to project its union as more important, says a senior official in a company in Tamil Nadu. But when a secret ballot is suggested, the official says it is not necessary. There are internal mechanisms like works committee, workers' committee, canteen committee

ILO conventions 98 and 87 provide for the right to form workers unions but are also silent on recognition or verification procedures.

But Coen Kompier, senior specialist in international labour standards in the ILO in New Delhi, points out that Article 4 of Convention 98 says that measures appropriate to national conditions shall be taken, where necessary, to encourage and promote the full development and utilisation of machinery for voluntary negotiation between employers  and workers' organisations.

The ILO's Committee on Freedom of Association has so far looked at 3,000 complaints worldwide with 60 from India alone and has been regularly addressing non-recognition issues, he adds.

The government's failure to ratify the two ILO conventions makes it vulnerable to international charges of supporting a race to the bottom (in terms of infringement of labour rights) in the name of industrial growth.

Labour Secretary Prabhat Chaturvedi denies that unions are being obstructed. As for the ILO conventions on freedom of association, he says they clash with the conduct rules that government servants are obliged to follow. "We are discussing with the ILO how government servants can be exempted," he says.

Trade unions are not ready to give up the battle. Last month the Indian National Trade Union Congress held a two-day conference on ratifying the twin conventions inviting the labour ministry, industry and ILO. The All India Trade Union Congress (Aituc) says legislative measures are needed within.

"What is the use of the Trade Union Act when workers are sent to jail or dismissed if they go on strike or try to form a union?'' asks Aituc National Secretary D L Sachdeva. 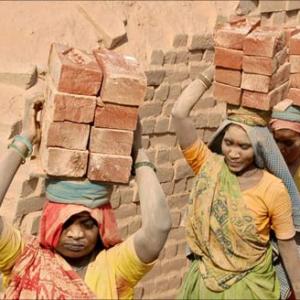