Clearly the DXY is overbought and needs to work off overbought conditions. That will trigger consolidation in US equity markets that are just as overbought, says Sonali Ranade

The US dollar was the big story of the week, and this is what I had written about it last week:

I prefer to view it as dollar strength because I have been bullish on the dollar right from May 2011 and to me DXY is just launching into its wave 5 that will take it above its previous top of 84.25. But dollar strength is going to impact commodities further compressing prices while the equity markets may in fact ignore it.

The DXY made a high of 84.515 during the week. Clearly the DXY is overbought and needs to work off overbought conditions. That will trigger consolidation in US equity markets that are just as overbought. And there may be some pressure off commodities as well.

The second big story of the week was the second collapse in gold prices. Again, this is what I said:

With the price crumbling from 1489, gold now starts the hunt for bottom that will make a decent stab at taking out $1321, its previous low.

Gold made a low of $1353.6 during the week and we may still get to $1320. But the bigger story is that we may expect a fairly sharp rally from there after some consolidation.

Do read what I've said on crude carefully. My sense is that WTI crude has a lot of nasty surprises in store for unwary bulls in crude. 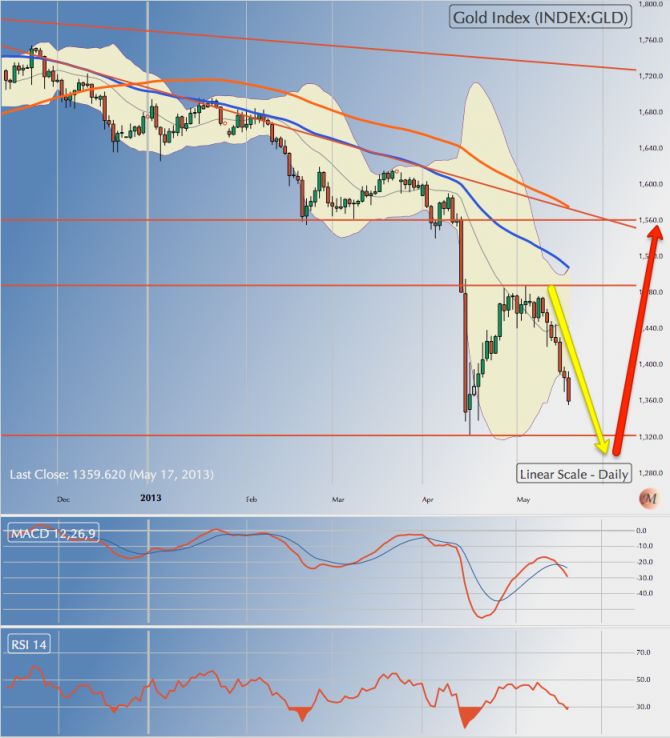 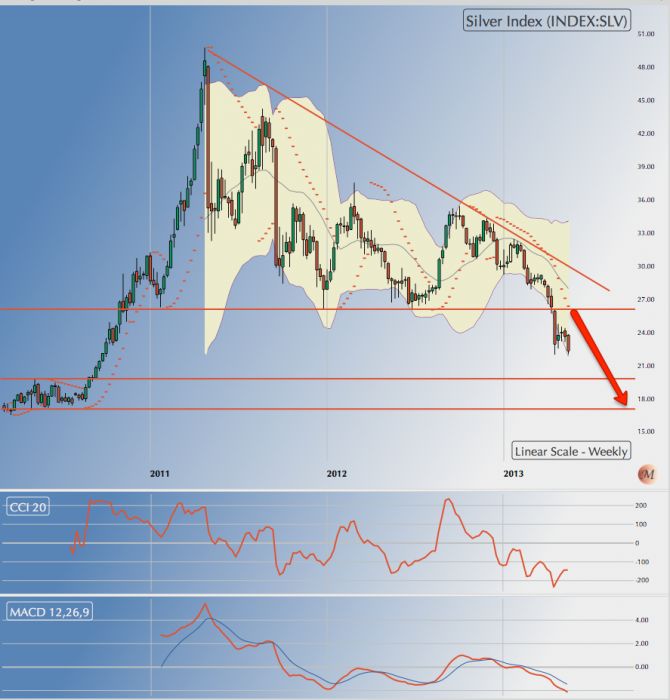 Silver: Silver closed the week lower at $22.352 in line with expectations. First support for silver from current level lies at $20 and the metal has plenty of time and space to get there. My sense is that silver’s chart is deceptive and may hide a severe sting in its tail. Would be unwise to assume that the $20 support will hold for silver. 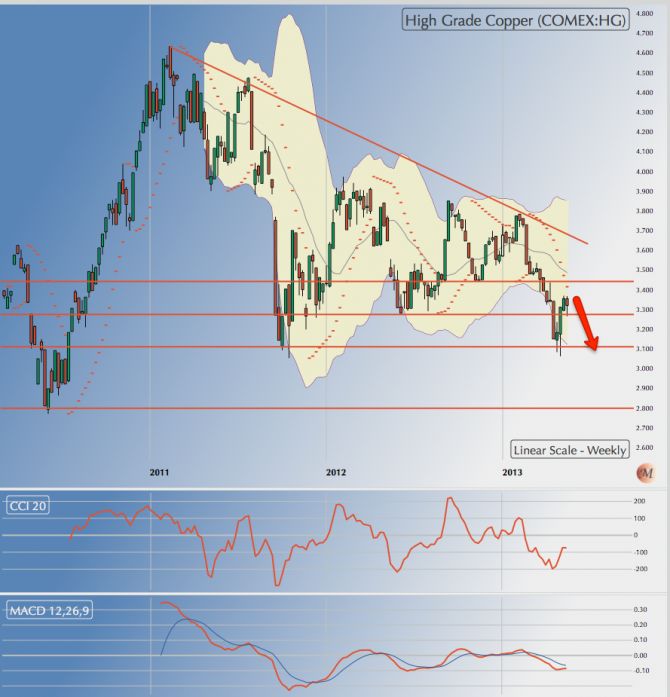 HG Copper: Copper too turned lower as expected last week and closed the week at $3.323 per lb. The downtrend in copper $4.65 in February 2011 now appears to be nearing termination and over the next week or two, copper will likely attempt to confirm that $3.05 is an solid support for this correction. Upon confirmation copper can be expected to rally from around $3 per lb. for a target of $4 per lb. Look to buy the low with a stop loss under $2.75 per lb. 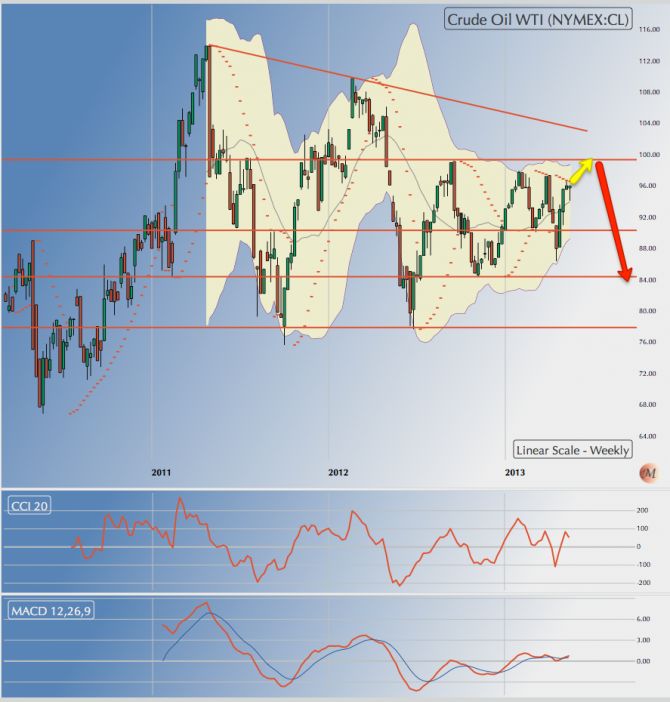 My sense is that crude could pull back to $97 early next week but is likely to fall rather sharply from that level. Could crude collapse as dramatically as gold? It is possible. Over the next 4 to 6 weeks I expect crude to test $84. I would not rule out $77 either. First support from current levels is $90, which we could see next week. Short with a stop loss just above $100. 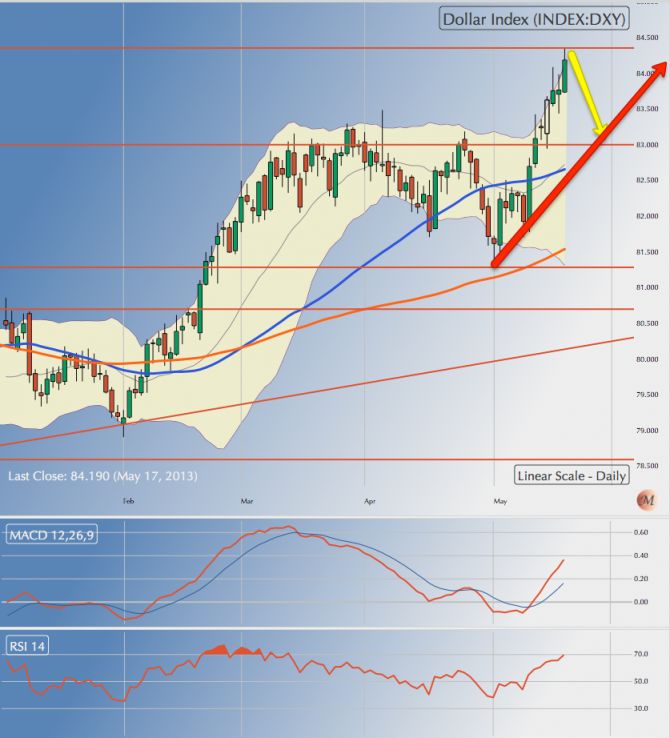 US Dollar: The DXY rocketed upwards last week, closing the week at 84.38 after making a high of 84.515. Although I am a dollar bull, even I did not expect such a dramatic turn around in the dollar. The market appears to be setting up some vicious bear traps especially where popular sentiment is contrary to logical direction of markets. The DXY is clearly overbought and needs to work that off. I would expect a consolidation just over 83 level for a week or two. The ultimate target for this bull run in the dollar could be much higher than my initial target of 84.25. 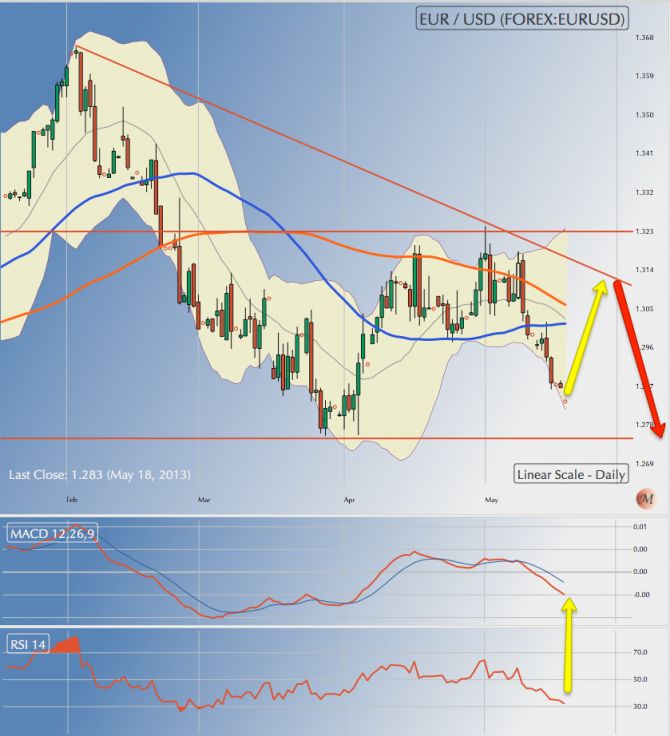 EURUSD: The euro closed the week at 1.2838 below its 50 and 200 DMAs. The fall in EURUSD is over-done though entirely as expected in this blog last week. The euro has tested support 1.285 along the upward sloping trend line for this rally from 1.20. Over the next week or so we can expect a fairly sharp pullback towards 1.32 levels before the downtrend resumes again. 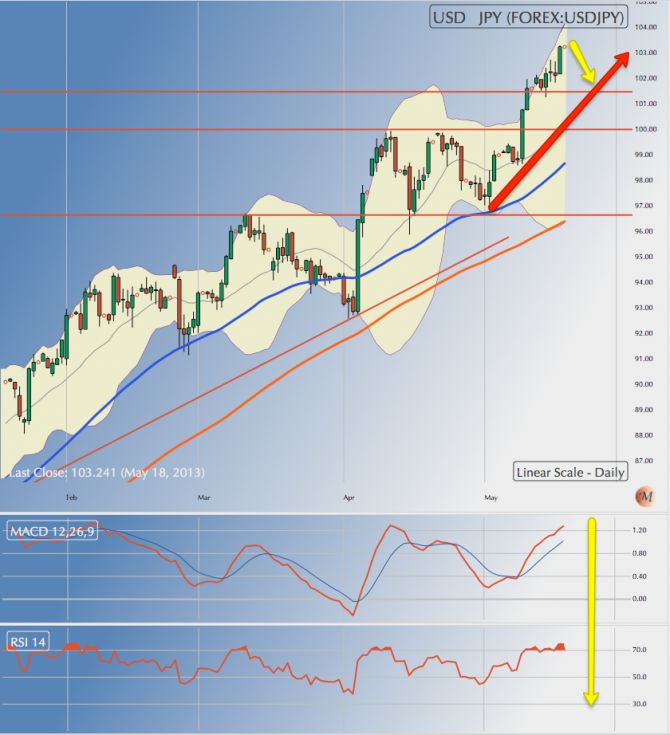 USDJPY: The dollar closed the week at yen 103.18 after making a high of yen 103.30 during the week. The dollar is clearly overbought in the yen market [as elsewhere] and needs to consolidate for a while. Over the next 4 to 6 weeks expect it to retest yen 100 level before making a dash higher. There isn’t much to trade for though. USDINR: The dollar maintained its elevated levels against the INR during the whole of last week closing the week at 54.88 after making a high of 54.898. While the correction in the DXY overseas may keep the dollar subdued in the INR market, wave counts suggest a rally to 55.50 before it resumes its downtrend. I expect a pullback to INR 55 early next week before the dollar heads down to INR 53 region. 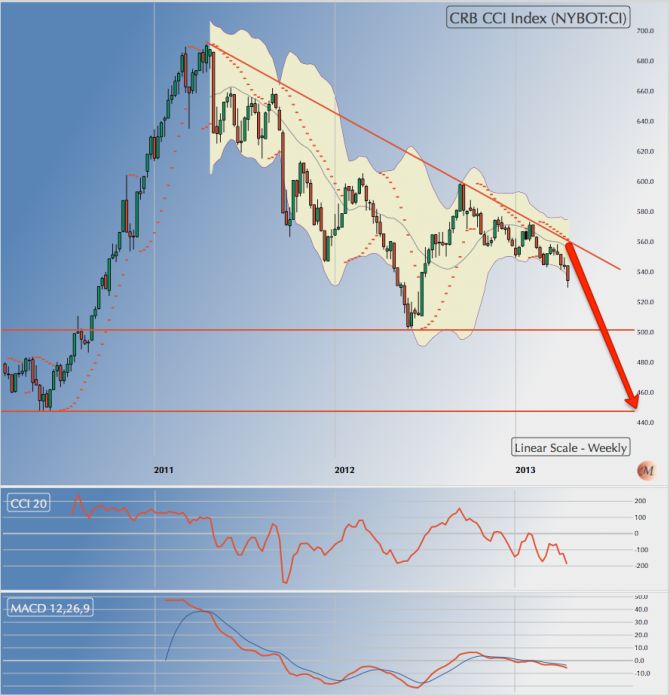 CRB CCI Index: There is a tremendous churn going on the commodities market that has bullish and bearish implication for different stock & equity markets in general. The ongoing churn is more of a once in a decade kind of churn and not your garden variety of a correction. Where could commodity markets go? The index is currently at 530. First support is at 500 followed by a more robust support at 445. In other words, a further correction of about 15 per cent looms! It won’t be uniform across commodities but it could be a killer. 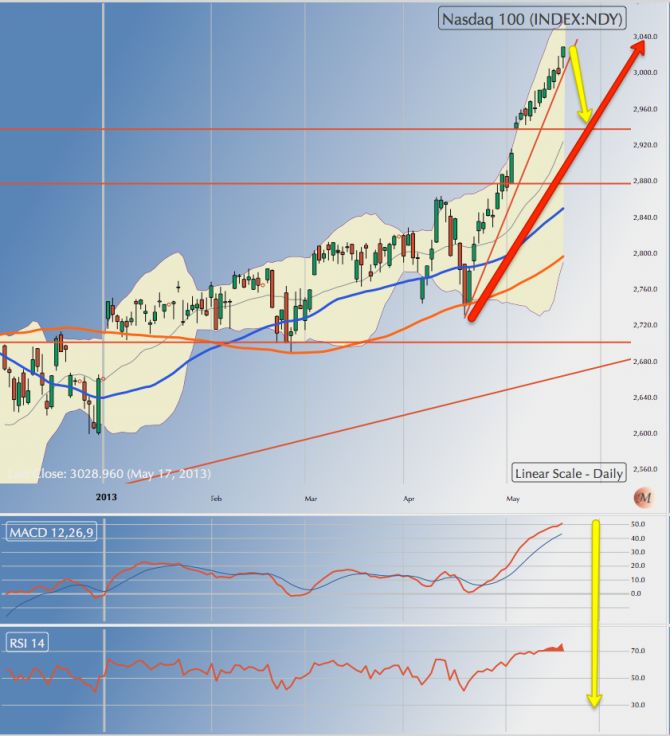 NASDAQ100: The Nasdaq100 closed the week at 3028.96, the new rally high. Both oscillators above signal the index is overbought and needs to work off the excessive steam. The Index’s first major support lies at 2937 gap followed by a more robust floor at 2860, which is also the index’s 50 DMA. However, there is nothing on the charts to indicate a trend reversal. Keep stop loss at 2875 and enjoy the ride. There is still time and counts to this rally. 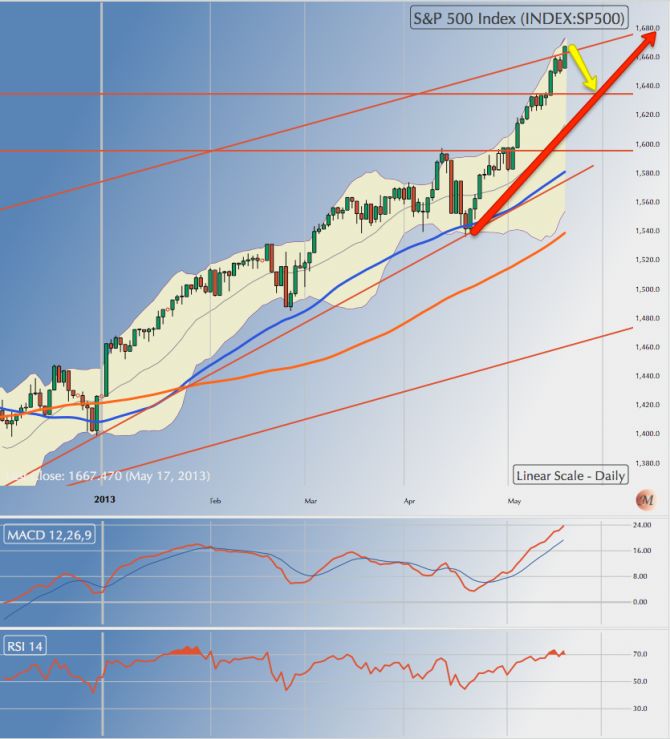 SPX: The SPX is even more overbought that the Nasdaq100 and needs to work off steam. The index closed the week at 1667.47 the new high First major support lies at 1600 although it is hard to see how SPX could possibly get there in a normal correction. Expect a shallow running correction before the uptrend resumes after a week or two. Markets at this late stage in rally can stay overbought for long periods. 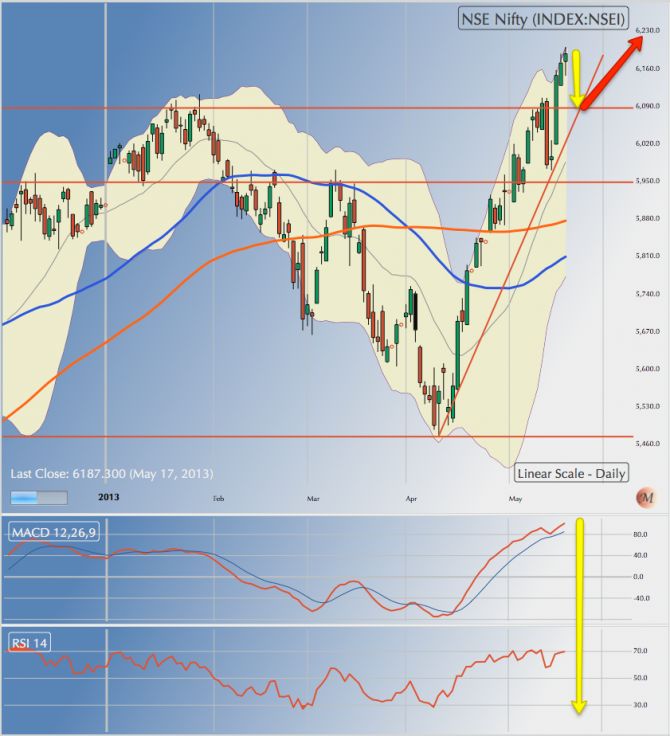 NSE NIFTY: The Nifty  closed the week at 6187.30 breaking atop the previous high at 6088.40. The Nifty  is overbought and needs to retest this 6088 level as new support in a more robust fashion before heading for the next overhead resistance at 6324. If 6088 holds, it will be the first confirmation of my hypothesis that we are at the start of a new supper-cycle in the NIFTY.

On the other hand, if 6088 doesn’t hold the Nifty can comeback to retest 5800 and possibly 5400 although the latter looks improbable right now.

My sense we will see both – ie, a lung for 6300, a failure to top it and a correction back to 5800. Could be very volatile times ahead. A dip to 5800 would be welcome though and should be used as a buying opportunity. 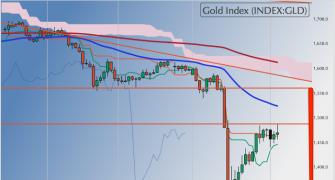 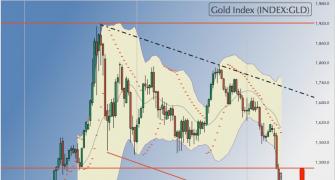 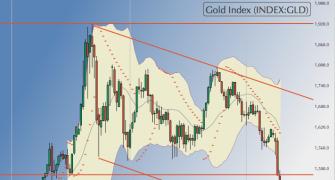 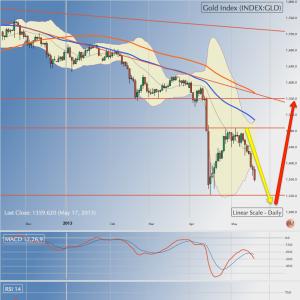 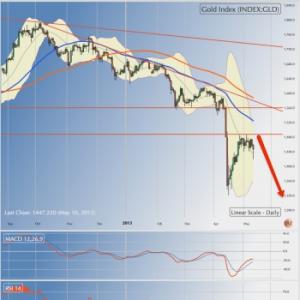