The country must get its act on global alliances right in order to feed its fuel-hungry economy, points out Subhomoy Bhattacharjee. Trend spotting on a global scale for 2019 shows up hardly any one that will really make a persuasive case. Commentaries for the year have, instead, thrown up a wide menu, which means the case for the year is wide open.

There were strong contenders though like President Donald John Trump's engineered shutdown of the US government or that of Nikkei's fall in Japan on its final trading day of the year, leading to its first annual loss in seven years. The 12.1 per cent decline of the index in 2018 broke its longest winning streak since the late 1980s.

For India too, despite a general election due in four months, the guidance seems muted. Of course, it isn't likely to turn out that placid as none of the previous editions have passed without their share of drama.

But it does seem that irrespective of the occupant of 7, Lok Kalyan Marg post the elections, some of the trends for the economy are fairly long term.

The sectors likely to see the most promising action are in agriculture and related sectors like food processing, as well as the infrastructure sector.

The risks all come from the unresolved energy questions. We shall come to those shortly.

It is also in line with the global trends, though the first quarter of 2019 has an event-packed calendar. The Brexit calendar says UK would leave the EU by March 29, 2019; reports from the latest round of US-China trade talks seem most promising and could create a stabilising influence on world trade soon, while along with India, a host of countries go to elections at the same time. These are Indonesia, South Africa and Nigeria.

Bangladesh has already returned a 'yes' mandate for the ruling Awami League. And key central banks, beginning with the US Fed meeting in late January, would decide if inflation, at least wage push has returned or could remain missing in action for the rest of the year. (RBI's MPC will meet on February 5).

So while IMF expects growth to slow down in 2019, the year-end risks seem to have got muted.

For India too, some of the tail risks are finally over. 2018 ended with the political parties picking up the worst one, that of loan waiver for farms. The consequent risks have already been stitched in to the new year expectations for the banking sector.

It is possible to look beyond now. The most promising one of those is an expected spike in demand for agri and dairy products.

There are two ways to factor in this spike. First, the rising population and the rejuvenated rise in income because of the renewed growth momentum of the economy creates a strong demand for these products.

It could be supplemented with a universal basic income for which the consensus is building up.

Second, there is another consensus developing around getting the long delayed reforms in the agricultural marketing infrastructure, going.

Most of the changes here do not need money, but need the rules to be rewritten. This could be the biggest change in the economy in 2019 if handled well. The markets may have realised some of this story already.

In a year when most sectors tanked, the market cap for food and beverages climbed 2.59% on the BSE, leaving heavyweights telecom and cement behind. Outstanding bank credit for the sector has ready reached Rs 1.4 trillion by the end of October and ranks seventh, catching up with the engineering sector.

The other runaway sector could be infrastructure, especially the railways.

Some of it in the passenger segment would be derived from the rising income of the lower half of the Indian population. The other is freight and the railways's expanded capacity to carry it.

Roads are expanding fast, but the pondering turn around in the Indian Railways is what is likely to catch attention in 2019.

The changes are not as drastic as Railway Minister Piyush Goyal will have you believe, but they are arriving.

The most ambitious of those, the Rs 81,400 crore Delhi-Mumbai Freight Corridor, in the works since 2006, has a deadline of March 2020, but most of it should get going within this year.

The railways has already begun trial runs on some stretches of these lines that are capable of carrying heavier than the 22.5 tonne axle load run on other lines.

Technological changes like those for semi-high speed trains are catching up. The laggards are those for institutional changes.

The NDA government had set a target of leasing out 100 private sector-run fresh terminals two years ago. A little above half of those 58 as on December 2018 are in place.

But the most promising change for 2019 could be in adoption of e-governance by the states. The scale of rapid disaster relief in Kerala in 2018 showed what e-governance is capable of delivering. The other states watched carefully.

Telangana has become the first to tie up with a government abroad, Estonia, to deliver on e-governance results, and even puny Nagaland has joined suit.

The interest cuts across party lines. West Bengal, for instance, is trying out the application of block chain in land records and in the health sector.

But, if as state Commerce, Dinance and Industries Minister Amit Mitra claims, it can demonstrate a successful adoption of blockchain in the city traffic control system, there wouldn't be any looking back.

Crude prices ended 2018 at just about the same place where they began, with a violent spike in October in between. And domestic coal supplies at a third of the country's power stations have dried up.

The twin scare mirrors a challenge for India.

Should it stick to coal and attempt to jump straight to renewable energy or make a detour via natural gas?

Should it attempt to develop a long-term partnership for oil wells abroad?

Oil minister Dharmendra Pradhan does not have the mandate to sort through these questions, but a lot rides on the choices made.

There is no point for India to spend scarce resources on the high seas in 2019 as it has begun to. It has established a bridge head at Chabahar port, taken on the mantle of a pan-oceanic partner with Japan through the Asia-Africa Growth Corridor.

Yet, it is still scared to make choices among friends. In 2019 it might import as much as half the quantity of coal as it mines inland, but that could mean investing in African States, which is a thorny quest.

New Delhi also shows no clarity on who would be its preferred partners to keep imported oil and gas flowing to a hungrier economy, but the choices again have to be made. And those are political choices.

Yet the risks for 2019 appear to have a downward bias. Among those from the sixth largest economy's point of view, the unpleasant ones could only spring from them who will govern. 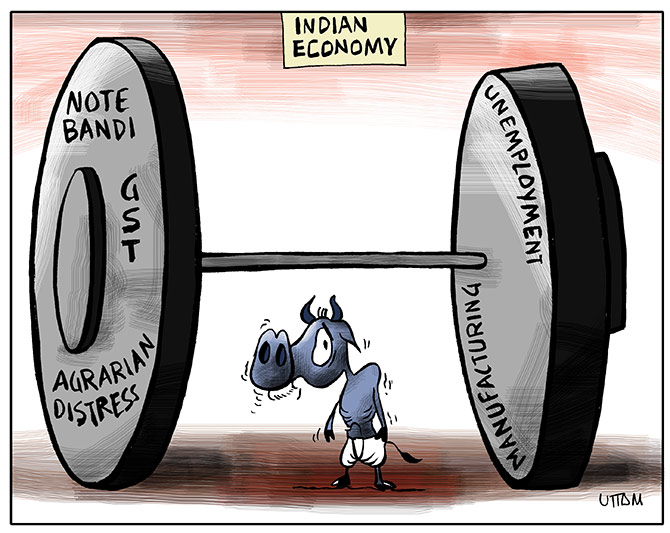