News
Business
Movies
Sports
Cricket
Get Ahead
Money Tips
Shopping
Sign in  |  Create a Rediffmail account
Rediff.com  » Business » The world is just not prepared for another financial crisis

The world is just not prepared for another financial crisis

It is six years since the financial crisis. If another hits soon, the world has no tools left to deal with it, notes Akash Prakash 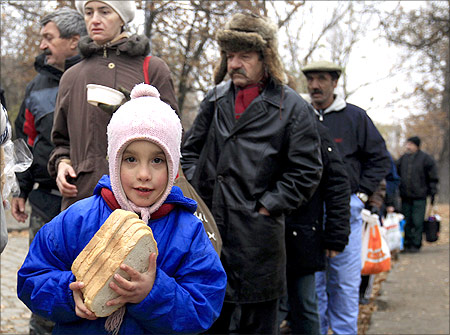 In the piece, they make the basic point that if we were to get another recession either in the United States or the global economy, there are almost no policy tools available to combat the slowdown.

We have been unable to restock the policy cupboard, either through raising the United States Federal Reserve’s funds rate, by normalising bond yields or by improving government balance sheets.

This is a unique situation of extreme policy vulnerability and something to be feared as we are in effect in uncharted territory.

Stephen King, the chief economist of HSBC, makes the point that we are now six years into the recovery phase of this business cycle.

In the United States, the trough in economic activity was reached in June 2009.

However, despite this being the sixth year of recovery, the Fed funds rate remains at zero, 10-year Treasury yields are lower than they were immediately after the Lehman collapse and system-wide debt levels remain too high.

The Federal budgetary deficit has improved, but at around two per cent is still much higher than in past recoveries.

Other regions of the world are very similar.

This pattern of economic behaviour is very dissimilar from past cycles.

Historically, rates, bond yields, the fiscal deficit and debt levels have all normalised as the economy has recovered.

Yes, the Fed funds rate gets cut as we go into a recession but then is raised as soon as the recovery sets in.

The reason why this cycle is different, and financial conditions have not normalised, is largely the extremely slow pace of the post-global-financial-crisis economic recovery.

The average US gross domestic product growth rate for the last six years has been only two per cent -- the slowest recovery from an economic trough in the last 40 years.

This slow pace of recovery was despite the economic contraction of 4.2 per cent (peak to trough) in the global financial crisis being the worst recorded in the post-war era.

Thus, you had a very slow revival from a very low level.

As another signpost of how poor the growth record has been since the global financial crisis, US GDP growth has averaged only one per cent in the seven years since the last peak of the economy in December 2007.

This number is significantly below the three per cent average of past business cycles.

Beyond slow growth, the other factor inhibiting any move among policymakers and markets to normalise financial conditions has been the near total absence of inflation globally. The Fed has never raised interest rates with headline inflation as low as today.

The European Central Bank tried to raise rates in 2011, but had to hastily backtrack.

The point Mr King makes is that six years into a recovery, we have to be closer to a potential recession than most would like to contemplate.

History would indicate that a recession is not that far off.

The recession could be triggered by a host of potential factors.

We may have a steep slowdown in China, triggering a financial crisis in that economy and tremors across the world.

China is now arguably the largest economy in the world and, for sure, the largest trader of goods; any sharp slowdown here will impact the global economy.

The Fed may miscalculate, hike rates too soon, cause volatility in bond and foreign exchange markets and -- in a manner similar to what happened to the Bank of Japan – push the economy back into a recession.

Given its status as the locomotive for global growth, any recession in the United States will surely drag down the world economy with it.

We may also see systemic failures in the world of non-bank financial institutions, shadow banking, etc, precipitating an economic crisis in the real economy.

Irrespective of how this recession comes about, we will have another recession at some stage.

The HSBC report’s point is: how will we fight it?

We will have absolutely no policy tools at our command.

Every previous downturn, whatever be its cause, has been accompanied by sustained easing of monetary and fiscal policy as the means to bring us out of the economic slowdown.

But you can’t cut a Fed funds rate that is already at zero.

Just to give context, since the 1970s, in every downturn, the Fed has cut rates by at least 500 basis points.

Clearly, this is not possible today.

In the absence of monetary capacity, fiscal aggression would seem to be the way forward. Yet even here the scope for action seems limited.

Unless governments and the electorate are willing to live with much higher levels of debt and fiscal deficit than has been the norm.

Given the demographic and healthcare challenges facing much of the West, there is really very limited ability to load any additional debt on the national balance sheets of most countries.

Government debt levels are projected to rise rapidly in all countries in the West, even without modelling another recession.

QE may be tried again, but even here we already have a huge differential in performance between the real economy and financial assets.

Prices are very high across all asset classes.

Can you engineer an economic recovery by stretching already overvalued financial assets?

While QE has arguably stabilised economies globally, it seems to have had little impact in starting growth.

Mr King makes the point that ideally, we need to find a way to rebuild the conventional arsenal of policy tools, but doing so endangers the current economic recovery.

Trying to raise interest rates or create budgetary surpluses today will risk pushing the economy into a recession, such is the fragility of our current economic situation.

There are no easy answers. We are running blind in the sense that we have no conventional policy tools available to handle an economic downturn when it hits.

Just as central banks have had to resort to unconventional policy measures to bail out the global economy after the global financial crisis, this sailing of uncharted waters is likely to continue.

Expect to see resort to more and more unconventional policy when the next slowdown hits. There seems to be little alternative.