New life for Aadhaar: Is it possible?

Aadhaar will work wonders in at least two instances -- for the distribution of pensions and scholarships (for this, correct identification is all that matters), and payments under the rural employment guarantee programme. 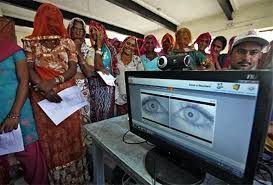 Now that the Union government has relaunched Aadhaar, which biometrically establishes identity, and taken steps to create and link millions of bank accounts, electronic direct benefit transfer can be expected to take off.

But for the entire Aadhaar experience to be positive it is critical to know what it can and cannot do.

The key gain from using Aadhaar will be a drastic cut in impersonation and fictitious identities, thereby plugging a major loophole through which a lot of leakage in subsidy payment takes place.

But Aadhaar will not be able to establish if a person or a household, even if correctly identified, is actually poor or not.

For targeted subsidies, such as for food, the second leg is as important as the first.

Leakage through the entire supply chain for the public distribution system is critically enabled by the ration-shop owner saying that some grain was given to people who either do not exist or who are reconciled to someone else 'lifting' rations against their cards.

But this is not all.

The heaviest subsidy is given to below-poverty-line families.

It is the states that identify them, and in many states a huge proportion of households are wrongly issued BPL cards.

Even with Aadhaar, some people who are not poor will continue to draw heavily subsidised rations not meant for them.

But Aadhaar will work wonders in at least two instances -- for the distribution of pensions and scholarships (for this, correct identification is all that matters), and payments under the rural employment guarantee programme.

The great plus of the programme is that it is self-selecting.

The state machinery does not have to decide if you deserve to come under it or not.

If you are not really poor, you will not be ready to do a day’s tough physical work for Rs 150.

But leakage takes place with the cooking up of what is called muster rolls, and with Aadhaar that will be well-nigh impossible.

For Aadhaar to live up to its promise, it is also vital to totally segregate it from the work relating to the National Population Register.

The purpose of the latter is to determine if a person is an Indian citizen or not, and this matter is fraught with divisive political issues.

Aadhaar, on the other hand, merely certifies the identify of a person; it will make good progress and be useful so long as it remains politically non-controversial.

What happens to the residual poor in a well-covered district who still do not have Aadhaar cards or linked bank accounts?

But these can be solved along the way.

Even without burdening Aadhaar with unrealistic expectations, it still has great potential.

Image: Village women stand in a queue to get themselves enrolled for the Unique Identification database system at Merta district in Rajasthan. Photograph: Mansi Thapliyal/Reuters