News
Business
Movies
Sports
Cricket
Get Ahead
Money Tips
Shopping
Sign in  |  Create a Rediffmail account
Rediff.com  » Business » Why the middle-class across the world is angry

Why the middle-class across the world is angry 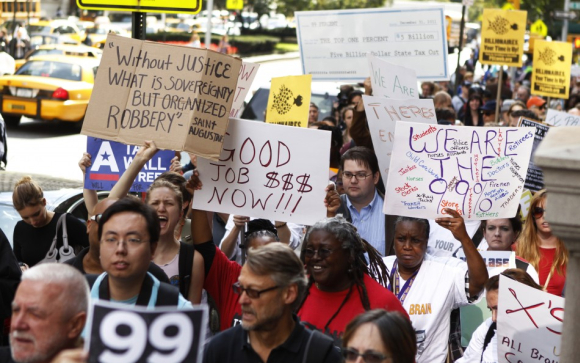 There are few periods in human history that have seen worldwide expressions of middle-class angst like the current one has.

In India, this expression takes the form of - sometimes tacit and occasionally explicit - empathy with the Hazare movement; in the United States, it is the Occupy Wall Street movement; in Egypt, it is Tahrir Square.

Similar middle-class protests are going on in Spain, Columbia, Chile, Brazil, Turkey and even Israel.

On the face of it, there is little in common across these movements other that the fact that participants belong to the middle class - that broad group of people in contemporary society who have a college education and occupy secure professional positions.

Layered on top of these demographics are cultural signifiers.  In England, this has traditionally been accent and manners; in America, it has meant being employed in white-collar industries.

In India and Egypt, it has meant being English-language educated, proficient and, more often than not, employed by the state.

This class worldwide is angry. It is expressing its anger in newspaper editorials (most journalists are card-carrying members of the middle class), on TV talk shows and across social media, all of which have been traditional and honourable forums for expression of middle-class views.

What is new is that they are now venturing out into the streets as well. The banners they carry are variants around a common theme: a protest against "corruption" and a desire for "true democracy".

The targets of their ire have been, depending on the country, Wall Street bankers (America), corrupt politicians (India) and oligarchic ruling families (West Asia and elsewhere). Everywhere the esteem of elected politicians has diminished.

It was the economic historian Eric Hobsbawm who pointed out, in his 1964 book Labouring Men, that social conflict is clustered in specific periods of time: the 1840s, the 1870s and the 1890s.

Other historians have added 1968-75 as another cluster. Each of these clusters saw waves of strikes and, sometimes, violent political actions which were countered with political repression by the authorities of each period.

Hobsbawm conjectured that each of these periods of social conflict came at the end of a long period of economic prosperity, called a Kondratiev Wave after Nikolai Kondratiev, the Russian economist who first spotted them.
The First Kondratiev Wave of prosperity was brought on by the original Industrial Revolution, and the societal conflicts of the 1840s signalled its end.

Thomas Carlyle, writing at that time, pointed out the paradox of an England "full of wealth, of multifarious produce, supplies for human want in every kind" coexisting with high unemployment.

For example, in areas like Lancashire and Yorkshire, the heartland of the Industrial Revolution, a third of adult males  many of them handloom weavers  were unemployed.

The social unrest of the 1870s came at the end of the Second Kondratiev Wave, the prosperity that came during widespread deployment of railways and steam engines.

The unrest of the 1890s came at the end of the Third Kondratiev Wave, the prosperity that came with the surging demand for electricity and the construction of a vast new infrastructure of power stations and transmission systems reaching every home, factory and office.

The social unrest of the late 1960s and early 1970s came at the end of the Fourth Kondratiev Wave, the age of mass production which saw the massive deployment of autos, tractors, aircraft, petrochemicals and the supporting infrastructure of highways, airports and associated repair, maintenance and distribution services.

This era of prosperity, which was predicated on cheap oil, ended with the oil price hike by member countries of the Organisation of the Petroleum Exporting Countries (OPEC).

High levels of unemployment and dissatisfaction with the working style of the mass production regime brought on the social unrest at the end of this wave.

According to scholars like the late Christopher Freeman of Sussex University, the era we are living through is the Fifth Kondratiev Wave, the age of information and communication technology.

In the United States, some point to the elimination of vast swathes of middle management thanks to the business process re-engineering movement.

Others point to the outsourcing of services and manufacturing to countries like India and China.  In places like Egypt, Latin America and India, the state bureaucracies and companies that were a haven for middle-class employment from the 1950s onwards have stopped recruitment in the last two decades.

Employees in these entities are a frustrated and angry lot at their dead-end jobs. In India this blow has to an extent been softened by the growth of the IT outsourcing industry, but our brothers and sisters throughout West Asia, Latin America and in Europe have not had this luck. 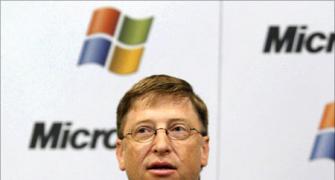 California Diaspora: Some blows, some clout