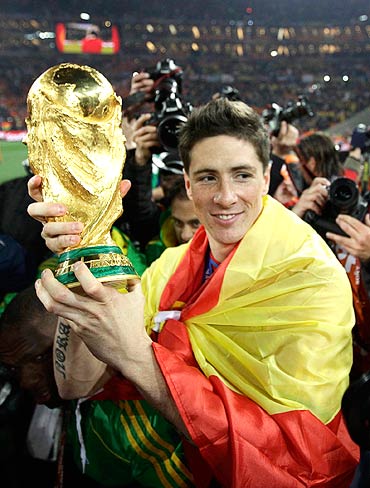 After his hurried departure from Liverpool, Torres finds himself the focal point of supporters' hatred, ire, and disgust. Nobody would believe the line thrown that he wanted to leave because of his desire to play at the highest levels. It is a case of reaching the other side of football that has thrown him into the roubles masquerading as pounds, says Manvendra Singh

It was a nightmare to start writing this piece, not for any emotional, or physical, reasons. That it had to be written was a foregone conclusion. There have been rings in the recent past that beckoned an article. The threat of a Chinese takeover of Liverpool Football Club, the trauma of losing to Blackpool at home, or even the arrival of Kenny Dalglish with the sacking of Roy Hodgson. All of them were events worthy of comment, in ecstasy or in agony. There has been more agony in the recent past, but none compared to the shock of hearing from the homepage Fernando Torres had put in a transfer request.

Saturday began with prayers, and plenty of touchwood on any pretext, that this was just a bad case of Friday friction, and it would be sorted out. After all, Gerrard was sorted out too, at the last moment. And various players in other clubs as well. But as the day warmed to a bright sun in Rajasthan, so did the mood. By the late afternoon it was a case of letting him go, but on our terms. There was no reason to panic, and froth in anger. The latter sentiment, however, being much easier to manage in print, than in practice. There should be an example of Liverpool playing the transfer game, and not just reacting to events. That was all supporters wanted, a presence that suggested a direction, rather than a horizon looking vision. And so the game began, that was to make January 31, 2011, the most memorable of all transfer deadline days. Who played chicken, and who chickened out first, is for a long-term analysis. But there was still the nightmare of beginning to write this piece.

It goes like this. On the night Spain won the football world cup in South Africa its players partied with the cup in their dressing room. One of the photographs that did the rounds was of Torres holding the world cup, with a Liverpool scarf draped across his shoulders. It was an affirmation of a kind of loyalty that every supporter would value more than anything else. That photograph came to become the wallpaper on my laptop. Especially as no Liverpool player had held the world cup as a winner in more than 40 years. No doubt about it, the photograph was a fancard holder's dream. But here is where the nightmare comes, for I would have to see the photograph once I got down to writing this piece, and that was an agony that I did not want to experience. No way.

The only way out of the dilemma was to hold my sight down, and open the control panel to its maximum size, and then begin the process of changing the wallpaper, and closing the brief chapter. The desperation to finish the process quickly has resulted in a curiously ironical photo replacing it. After the momentous 2005 Champions League final, there was a Chelsea attempt at buying Steven Gerrard. They had obviously been courting him from before, for that was one of the questions asked in the post-match press conference. Anyhow, the process of wooing Gerrard went to the wire, and he followed his heart rather than the pockets. During the process supporters made a banner that ended up in my collection of photographs that is my screen saver. It says, 'You can buy presidents, big planes, fancy yachts and tons of pies for fat frank, but you can never buy our history'. And it is ironical that this is my new wallpaper, now that Chelsea's oligarch has bought Torres at a price that treats the British recession with contempt.

The sentiment in Merseyside, and carried into cyberspace, is one of sheer derision and scorn for Torres. Holding the world cup, and the club crest on his shoulders, he had declared his continuing loyalty to the Liverpool community. That display, and declaration, earned him a status in the community that would've been beyond imagination. But today, after his hurried departure, Torres finds himself the focal point of supporters' hatred, ire, and disgust. Nobody would believe the line thrown that he wanted to leave because of his desire to play at the highest levels. Nobody believes that winning the Champions League drove him into Chelsea's rich arms. There were times this season when he was playing, and scoring goals, as though he singularly wanted to take Liverpool into champions league qualification. The double against Chelsea being the most vivid of examples. But then there were also times when it seemed he'd switched off from the pitch and the game around him.

He wanted elsewhere, and not simply because of football played in front of sterile crowds. He wanted out simply because Anfield L4 is poles apart from Stamford Bridge SW6. It is not posh enough for a man who yesterday drove to Liverpool's Melwood training ground in the company of three others. Clearly he'd prefer to be walking on Fulham, or King's Road rather than the working class neighbourhoods near Anfield Road. It is a case of reaching the other side of football that has thrown him into the roubles masquerading as pounds. It has happened before, most notably David Beckham and Michael Owen. And neither is welcome from where they left. The latter receiving lungfulls of Anfield abuse, including from this author, when he appeared in a Manchester United shirt.

The disdain is most apparent in the sterile departure note known as the official confirmation. It says, simply, 'Liverpool Football Club can confirm Fernando Torres is now a Chelsea player. New record signing Andy Carroll will now wear the No. 9 shirt'. No wishing him luck for his future, no gestures of gratitude. So unlike the words with which Xabi Alonso departed, and little wonder that he remains loved and welcomed on Merseyside, while continuing to visit Anfield to watch his team play. There is one Spaniard who will never again be welcome to Anfield, as a player or a spectator.

The sentiment in the community is so full of anger and disgust at his departure style that it is finding vent in public forms.

Once the news was confirmed on Monday night I wondered about the number of Liverpool shirts in my cupboard that read Torres 9 at the back. It was a dilemma that lasted long enough for me to think of dodgy printers in dodgy back alleys who would remove Torres with dodgy inks that perpetuate their dodgy businesses. Maybe I will do that someday, but at the moment satisfy myself with the thought that it is the name in the front of the shirt that matters. The ones at the back, in any case, are never permanent.

Image: For Liverpool fans, the emotional high when Torres, donning the Liverpool scarf,  upheld the World Cup trophy after the finals in July 2010 in Johannesburg, has given way to deep derision and scorn. Photograph: Kai Pfaffenbach/Reuters

Former member of Parliament Manvendra Singh divides his passion between Barmer, which he represented in the Lok Sabha from 2004-09, and Liverpool 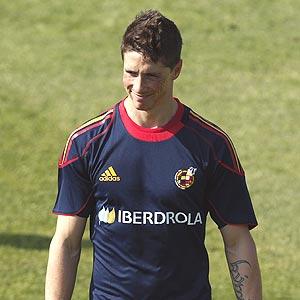