In 1997, in celebration of 50 years of India's independence, rediff.com ran a series on 50 Indians who achieved greatness in their fields, and one of those featured was 16-year-old Kutraleeswaran.

Kutral, as he was called, had become a sensation in long distance swimming after breaking Mihir Sen's record of crossing five channels in a calendar year. Kutral swam six channels in 1994 and was included in the Guinness Book of World Records. He was only 13 then. 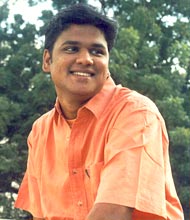 Talking to rediff in 1997, he said his dream was winning the Arjuna award and Olympic gold medals for the country. He did win the Arjuna award for breaking Sen's record. But Olympic gold? That remained just a dream for the young man. It was not because he lost form and failed to win medals, but for lack of sponsors!

In a country that appreciates only cricketers, even if they are mediocre, the talented Kutral was sidelined and forgotten.

It was ironic that when he went to swim in Italy in 1994 he was offered all training facilities provided he represented Italy at the Atlanta Olympics. Kutral declined the offer because he was an Indian and wanted to represent his own country. Alas, that never happened.

Though he started off by swimming in pools, it was the sea that attracted him, offered him challenges. When he had free time, he swam alongside fishermen's children. He then met Jayalalitha, who was Chief Minister of Tamil Nadu, and told her about his dream of swimming the English Channel. She promised to sponsor him, and also urged him to attempt the Palk Straits. The English Channel thus became his first cross-country swim, sponsored by the Tamil Nadu government.

"But how long could I go and request the Chief Minister to sponsor Kutral? Almost all the long distance swimming took place in Europe, and it was very expensive; I couldn't manage that much money," says Kutral's father Ramesh, an advocate, looking back on those early years of his son.

Even as a 16-year-old, Kutral was sad about the way his father had to run around each time a competition came up. He had said then, 'I was to participate in a competition in Germany. Everything from tickets to visa were ready. We were to start at 5.30 in the evening. At 3 pm we got a call from the sponsors. They said they could not sponsor me. My brother had gone to Bombay to arrange for the visa. At the last moment we had to cancel everything. I cannot say how disappointed I was.'

Kutral was also aware of the hurdles ahead of him. He had told this writer, 'Since I am in India I have to concentrate more on my studies now. I am in the tenth standard and I have to cut down on my tours.

'In other countries, if you excel in some sports you are eligible for good jobs. But here, unless you have a good academic background, you will not get any job. So, I am forced to give more importance to studies than swimming. Given a chance I would like to channelise all my energy into swimming.'

He couldn't, and decided to concentrate on studies. Reason: "Lack of sponsorship.

"I wanted a strong supporting career of my own, hence decided to concentrate on academics. Ethically, it was a painful decision, but logically practical and comfortable. But it was indeed very hard for me to come to terms (with the fact) that I was leaving competitive swimming," recalled Kutral.

When he realised that every competition abroad was a burden on his parents, he decided to call it quits.

"My parents did support me beyond words, and they are still ready to do so, but I didn't see a point in continuing," he said.

"My efforts to get private sponsors were disastrous," said his father. "He didn't want me to face such embarrassments. I told him I am ready to go and beg anywhere for money if I could send him for competitions but he was dead against it. I felt extremely bad when he took the decision to stop swimming and concentrate on his studies."

Still, Ramesh was hopeful of his son swimming after completing his 12th standard. But Engineering followed, and then it was a Masters in Engineering in the United States.

That was the end of Kutral's life as a swimmer. Now he goes back to the sea "purely for recreational purposes only, and try not to wet my clothes".

Any regrets about the decision?

"Yes and No. Yes, for leaving something I was pretty good at. No, for the position I am in right now."

Eleven years after his world record-breaking swimming expedition, Kutral recalls, "Yes, it was the government which sponsored me completely in 1994 (Guinness record) without which, obviously, wouldn't have been possible." 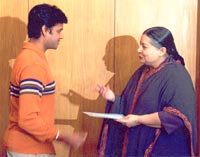 In return, now a post-graduate student in the US, he met Jayalalitha, now again the Chief Minister, after the tsunami struck the coast of Tamil Nadu and donated some money.

"She was very pleased with the fact that I pitched in from my own pocket for the tsunami relief and was surprised as to how much I had changed (physically) in 11 years."

To a question whether he felt it is difficult to be in any sport other than cricket in India because to lack of sponsorship, he replied: "The bitter fact is YES. Hope things change in time."

Even today, more than a decade after abandoning his dream of winning Olympic medals and starting a bright career as a hardware engineer with Intel in California, Kutral still dreams.

"At one point I would like to open a swimming academy in India."