'All I want to do is play football again.' 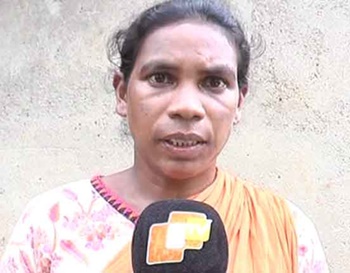 A few years ago, she was the goalkeeper of the Indian women's football team. Today, Tanuja Bage lives hand to mouth, struggling to make ends meet.

Unable to sustain her family with what she earns from working as a labourer in the industrial district of Jharsuguda, the 29 year old, who broke into the national team after representing Odisha at various tournaments, also tends goats to boost her income.

When Laxmi Negi/Rediff.com calls Tanuja, she has just come home. She had gone to buy rice for her family. The five kilos of rice, which cost her Rs 25, will last the family a week.

The days are tough for Tanuja, but that does not dissuade her from dreaming of a sports career for her and her daughter.

How did your sports career begin?

I would always be seen running. I took up athletics. I used to run all the distances right from 100 to 2,000 metres.

When I went for district meets I saw girls playing football and was instantly intrigued. With the guidance of my coaches I took up the game and there was no stopping me.

When there was a break from football, I also played rugby. The rules and nuances were never a hindrance for me. Passion over-ruled everything.

How long did your India career last?

I played football for Odisha for almost a decade. I ended up playing three Nationals in football and one in rugby.

I was selected for the Indian national team as goal-keeper. We were supposed to travel to Nepal, but due to lack of funds my journey was short lived. 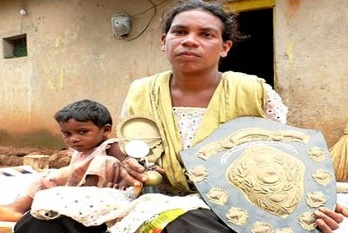 Why did you stop playing football?

I was fortunate to land a job as a home guard in Jharsuguda, but that was the only good thing about it. I was given the job under the sports quota. Strangely, I was not allowed to continue playing.

I was not given leave to play in the Nationals, attend training or preparation camps.

I would lie sometimes and sneak out to make time for football practice.

It grew increasingly difficult for me to balance sports and a job. The pay was also not much to stick around. Subsequently, I got married and had a daughter.

What are your expectations now?

All I want to do is play football again. I can and I will!

I am doing all this to pave a way for my daughter to pursue sport without any problems.

I have tried to acquire coaching licenses, but you need money to get these. I do not have that kind of money to fund my coaching education.

My qualification is not much -- matriculation. But I have the passion and ability to achieve anything if I put my heart and soul into it.

How did you start tending goats?

When I was jobless, with whatever savings I had, I bought two goats, Buddhi and Siddhi.

In time I sold Siddhi. Buddhi gave birth to two kids. I have 10 goats now. I don't have a proper house.

With the daily labourer work I manage to run the house. All I am striving for is a sporting future for my daughter.

My husband is also a daily wage labourer. No matter how hard we work, we can barely survive.

I am not asking for a high-paying job. All I want is a secure job which helps me to be connected with sports and fulfil my dream of making my daughter a sportsperson.

Aren't you disheartened that pursuing sport has brought you to this level?

I cannot think of a life without sports.

I tried giving it up for a few thousand rupees, but then I thought a part of me was missing. I am back at wanting to be given another chance of getting back into sport.

You can help Tanuja at https://www.ketto.org/fundraiser/help-goalkeeper-tanuja-fight-poverty (external link).