Sanya Richards-Ross wore her Olympic gold medal around her neck late into the night, got a few hours of sleep, said goodbye to her husband and then headed back to the track.

She put the celebration on hold.

When it resumes, it could just be twice as nice.

Richards-Ross, who won gold in the women's 400 metres on Sunday, returned to Olympic Stadium the following day and advanced to the semi-finals of the 200 metres. She won her opening race in 22.48 seconds -- the fastest time in any of the six heats.

She showed off her closing speed again, this time moving from fourth to first over the final 60 metres.

"Coach wanted me to come off the turn in front," Richards-Ross said.

She found another gear, made up ground and pulled away late -- much like she did in winning the 400. Richards-Ross advanced to semi-finals Tuesday night, just two races from a second gold.

'We celebrated until 2am' 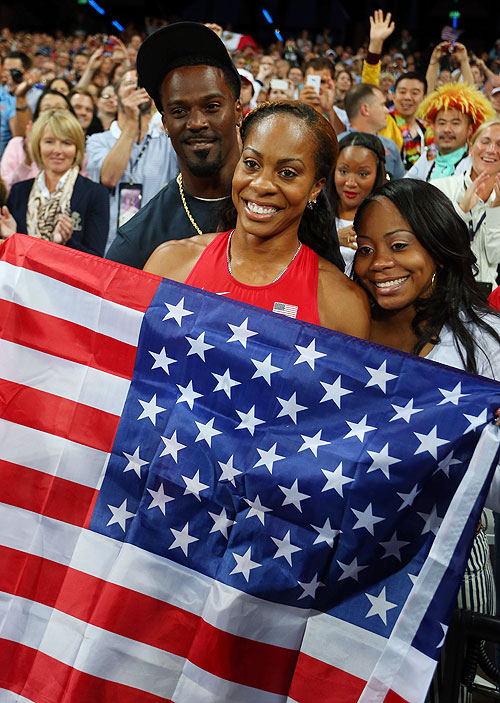 Image: Sanya Richards-Ross of the United States celebrates with her family on winning gold in the Women's 400m final on Sunday
Photographs: Alexander Hassenstein/Getty Images

Maybe the most impressive part was she did it despite a night filled with distractions -- the euphoria of a medals ceremony and having friends and family members, including her husband, Jacksonville Jaguars cornerback Aaron Ross, with her afterward.

"My entire family ... we all got together, my coaches, (Aaron) Ross, everybody was there. We kind of celebrated until about 2 this morning. Everybody kept saying, 'Go to sleep, go to sleep, you have to run tomorrow.' Even when I laid down I couldn't sleep. I was just so excited.

"I probably got four or five hours of sleep max. But I'm excited to be on the track again. I just feel lighter and free and so I'm just going to go out there and give it my best and hopefully make it through the semi-finals as well."

'I had my gold medal on all night' 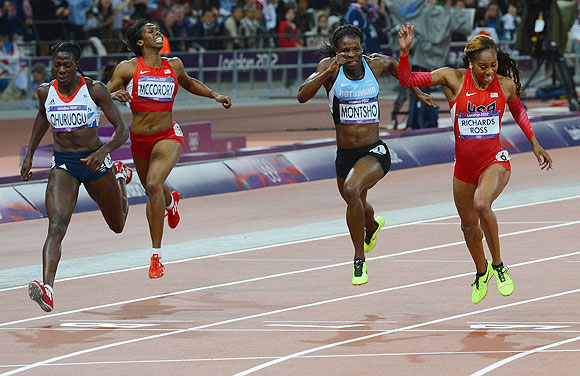 Image: Sanya Richards-Ross of the United States crosses the finish line ahead of Christine Ohuruogu of Great Britain to win the Women's 400m final on Sunday
Photographs: Shaun Botterill/Getty Images

Richards-Ross considered sleeping with her medal -- her first individual Olympic gold -- but instead decided to put somewhere else for safe keeping.

"I had my gold medal on all night," she said.

"I've never done that, worn the medal. I actually laid down in it for a minute, then I gave it to my dad, who has been on this journey with me and has worked so hard to help me accomplish my goals. He's now the proud -- temporary -- holder of my medal."

Where will it end up?

"In Austin, (Texas), we have all of (his Super Bowl) rings, his Thorpe Award and all my awards," she said.

"It's definitely going to be added to that collection."
Tags: Thorpe Award , Richards-Ross , Austin , Texas

Jeter ready to give Richards-Ross a good run 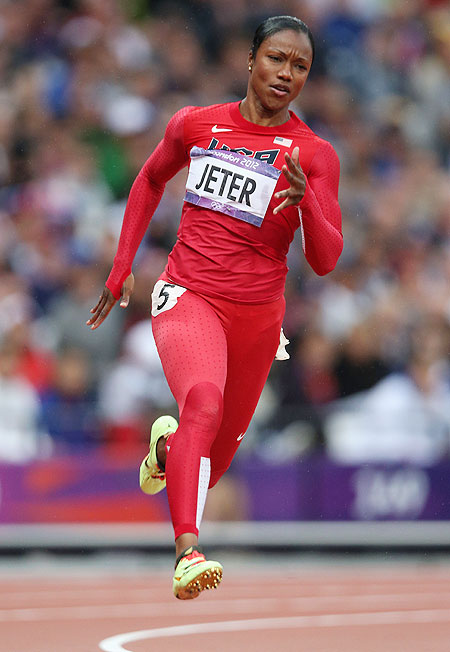 That gold might just get some company, but a tough field could have something to say about it.

Two-time defending champion Veronica Campbell-Brown of Jamaica barely advanced out of the opening round, finishing third in her heat in 22.75 seconds.

Americans Carmelita Jeter, the silver medalist in the 100 on Saturday, and Allyson Felix, the runner-up in the 200 at each of the past two Olympics, also qualified. So did the other two Jamaicans in the field: two-time 100 champion Shelly-Ann Fraser-Pryce and Sherone Simpson.

"It's the first round, so you can't get too excited. I just wanted to go out and wake my body back up and get my mind back to where it needs to be. Right now, it needs to be in the 200."
Tags: Carmelita Jeter , Veronica Campbell-Brown , Sherone Simpson , Allyson Felix , Richards-Ross
More
Copyright © 2022 The Associated Press. All rights reserved. The information contained in the AP News report may not be published, broadcast, rewritten or redistributed without the prior written authority of The Associated Press.
Write a
Comment
Print this
article
ALSO
READ