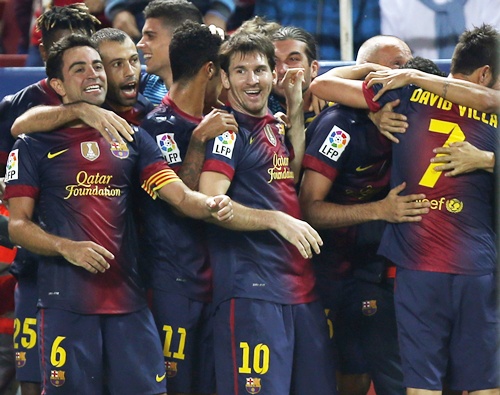 It was the second time Barca have recovered to win this season - they were behind at Osasuna before winning 2-1 -- and Tito Vilanova's side look hungry to take back the title they lost to Real Madrid last term after three straight triumphs.

Saturday's success means Barca equalled their best start to the season of six straight victories, a feat they have achieved four times previously and most recently in 2009-10.

They have 18 points, four ahead of Malaga, who thumped 10-man Real Betis 4-0, and will be at least eight ahead of Real when they host their arch rivals next weekend.

After a poor start to the season, Jose Mourinho's side are in ninth place on seven points and host promoted Deportivo Coruna on Sunday.

'I don't think a draw would have been a fairer result' 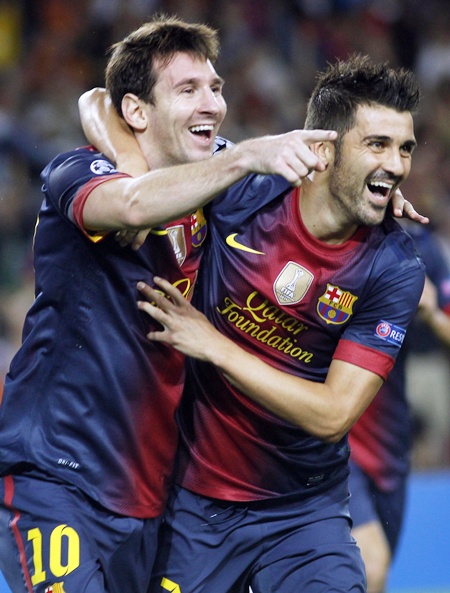 "I don't think a draw would have been a fairer result as we had more chances during the game as a whole," Vilanova said after Barca's dramatic win in Seville.

"It's always better to have a points advantage than not to have one but there is a long way to go," he added when asked about the early lead over Real.

Barcelona were perilously close to slipping up for the first time this season when Sevilla went 2-0 up at their Sanchez Pizjuan stadium through Piotr Trochowski and Alvaro Negredo.

With Carles Puyol and Gerard Pique injured, Vilanova deployed Alex Song at centre back alongside fellow converted midfielder Javier Mascherano and they were each at fault for the Sevilla goals.

Mascherano failed to clear a 26th-minute effort by Gary Medel -- who was dismissed 20 minutes from time after clashing with Fabregas -- and Trochowski picked up the loose ball and smashed an angled shot past Victor Valdes.

Former Germany midfielder Trochowski had netted Sevilla's winner in this month's surprise 1-0 success at home to Real, and was given a rousing ovation when he went off injured shortly before halftime.

It was tough on Sevilla 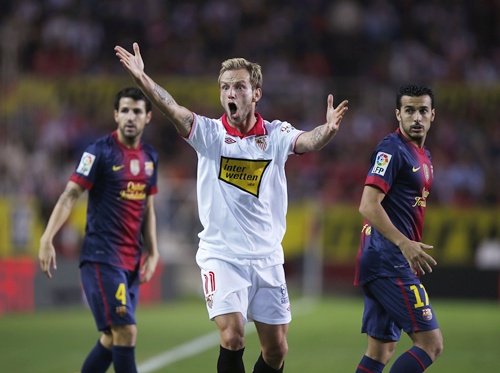 Sevilla were two ahead within three minutes of the restart when Negredo left Song trailing and chipped the ball over the onrushing Valdes before Fabregas pulled a goal back for the visitors with a fierce left-foot drive in the 53rd minute.

After sustained Barca pressure, the former Arsenal captain levelled at 2-2 in the 89th when he latched on to a Lionel Messi pass and lifted the ball into the net.

The stage was set for Villa, only recently returned from a broken leg, and Spain's record scorer ran through deep into added time and sent a left-foot shot past Andres Palop.

It was tough on Sevilla, who were close to beating Barca and Real at home in the same season for the first time since 2006-07 but instead suffered their first reverse of the campaign to leave them in fifth on 11 points.

They were incensed with the referee's decision to send off Medel and also felt the official missed a handball in the lead up to Barca's equaliser.

However, Fabregas said Medel had butted him in the face and even offered to demonstrate to the television reporter interviewing him exactly what the Sevilla player had done.

"If you want I'll do it to you and you can tell me," Fabregas said. "He got me in the forehead and that means it's a sending off."

Isco wraps up victory for Malaga 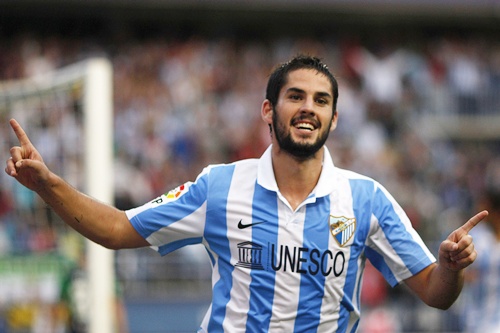 Malaga made the most of the 10th-minute dismissal of Casto at a damp but festive Rosaleda.

The Betis goalkeeper was shown a straight red after felling Eliseu in the area and Joaquin slotted home the spot kick before Javier Saviola made it 2-0 with a neat finish in the 28th.

An own goal from Amaya in the 73rd made it 3-0 before Malaga's promising Spain under-21 playmaker Isco scored the fourth a minute later to wrap up the victory.

In the early kick off, stuttering Valencia survived a Sofiane Feghouli red card to beat Real Zaragoza 2-0 and climb to eighth, bringing some relief to coach Mauricio Pellegrino.

Pellegrino's Argentine compatriot Marcelo Bielsa cut a tortured figure, however, as Athletic Bilbao's troubled season hit a new low when they had Fernando Amorebieta sent off in the second half and lost 2-0 at Basque rivals Real Sociedad.

Bilbao, who reached the finals of the Europa League and King's Cup last term, are mired in 16th place on five points, while San Sebastian-based Sociedad are sixth on nine points.