Sign in  |  Create a Rediffmail account
Rediff.com  » Sports » Down memory lane: The best and worst of Michael Schumacher 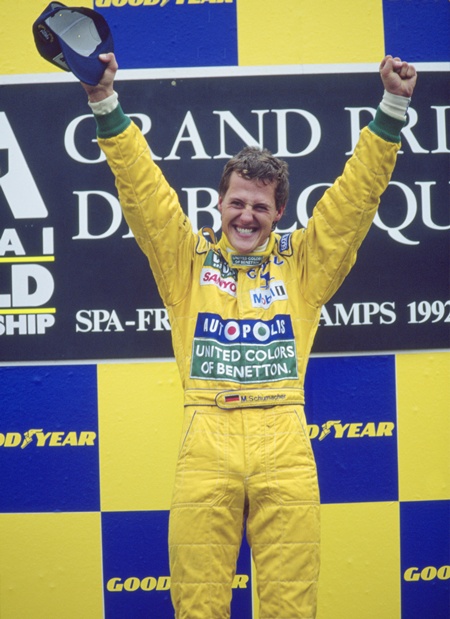 Formula One icon Michael Schumacher suffered a serious head injury while skiing in the French Alps on Sunday morning. Rediff.com jogs down the memory lane and presents some of the highlights and low points of the 44-year-old German's career since he made his debut with Jordan in 1991.

The seven-time world champion Schumacher raced for the last time in Formula One at the Brazilian Grand Prix in November 2012, finishing seventh before heading into his second retirement.

SIX OF THE BEST:

Schumacher's first race win, in the wet, and one in which he showed all his tactical brilliance.

Overtaken by Benetton team mate Martin Brundle after sliding off, Schumacher noticed that the Briton's tyres were worn out. Reckoning that his must be as well, he pitted immediately for rain tyres. It was a masterstroke of timing that won him the race.

Controversial win from 16th place on the grid 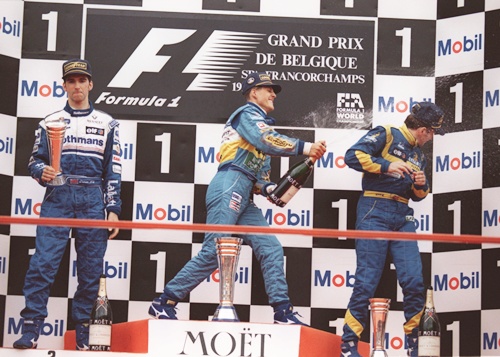 A victory from 16th place on the starting grid in changing conditions and with the German staying out on slick tyres in the wet.

The outcome was tainted by controversy, with Schumacher given a suspended one-race ban for weaving on the straights to prevent Damon Hill overtaking.

Drove the 'greatest race' for Benetton 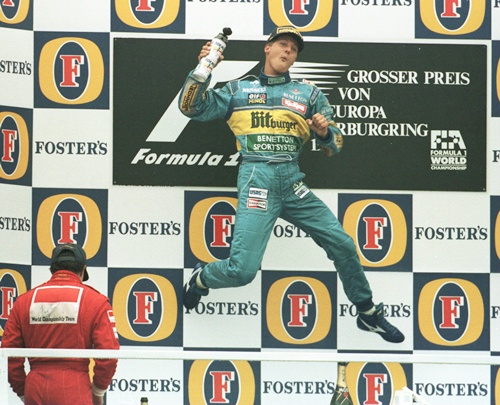 In his last race in Europe for Benetton, Schumacher reeled in Jean Alesi and overtook the Frenchman two laps from the finish to win in front of his home fans at the Nuerburgring in a race hailed as the greatest of his second championship year. 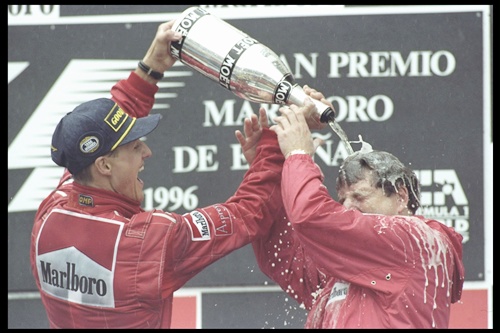 Schumacher's first win for Ferrari, again in the rain, and he lapped the entire field bar the two men on the podium with him -- although he was 45 seconds clear of second-placed Alesi.

"If anyone had asked me how much I would bet on me winning here, I would have said not one penny," declared Schumacher. 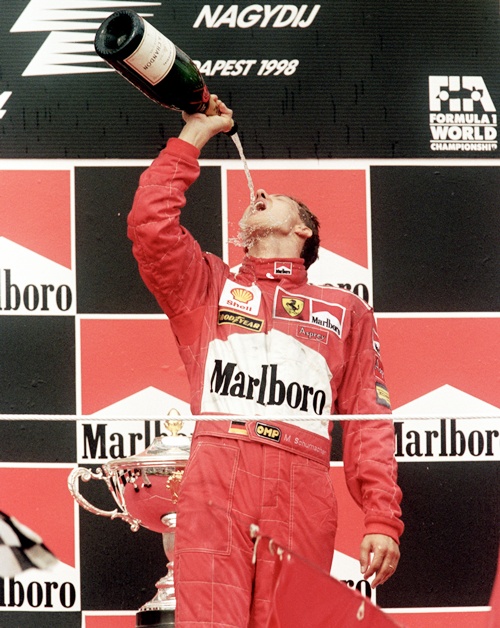 An inspired drive, coupled with a three-stop strategy at a circuit where overtaking was deemed almost impossible. Schumacher had to drive a series of sprints after technical director Ross Brawn asked him to make up 25 seconds in 19 laps.

Schumacher replied 'Thank You' and did just that. 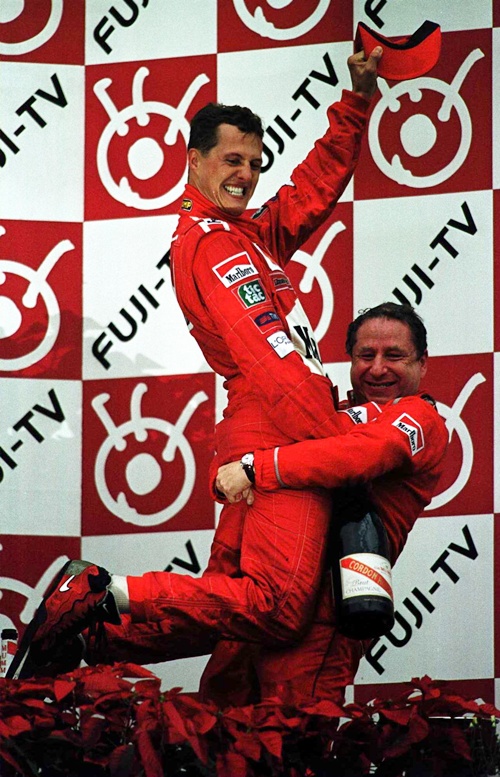 The race that clinched Schumacher's first title for Ferrari, ending their 21-year wait for a drivers' crown.

Schumacher had trailed McLaren rival Mika Hakkinen for almost 40 laps before getting ahead with pitstop strategy on one of his most emotional afternoons.

Schumi marred by allegations of cheating 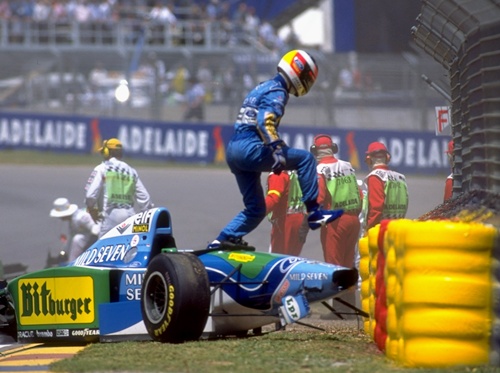 Schumacher faced furious accusations of cheating after an infamous collision with Briton Damon Hill in the title-deciding Australian Grand Prix in Adelaide.

The incident on the 31st of 81 laps knocked both drivers out of the race and Schumacher won the crown by one point. 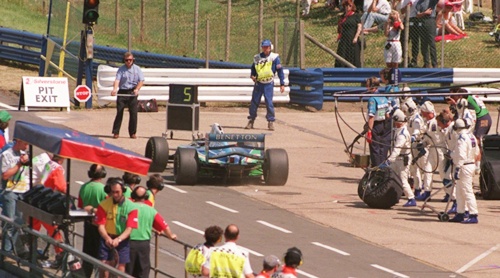 Schumacher was shown the black flag for failing to serve a stop/go penalty. He ignored it, claiming later not to have seen it.

The flag was withdrawn after Benetton explained the 'misunderstanding' and Schumacher served the penalty. 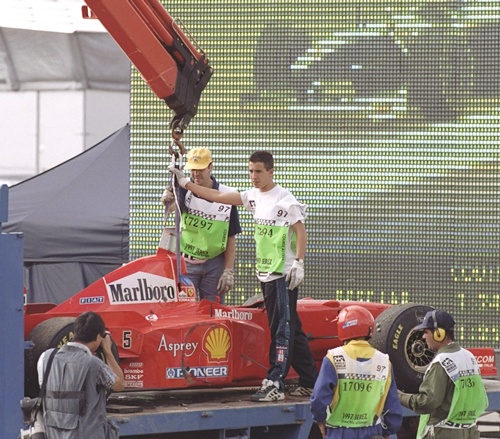 Another collision, this time at Jerez, with Schumacher trying to ram Canadian Jacques Villeneuve off the track in the title decider.

This time it backfired, Villeneuve won the championship and Schumacher was excluded from the final classification.

Ferrari ordered Barichello to slow down and alllow Schumi to win 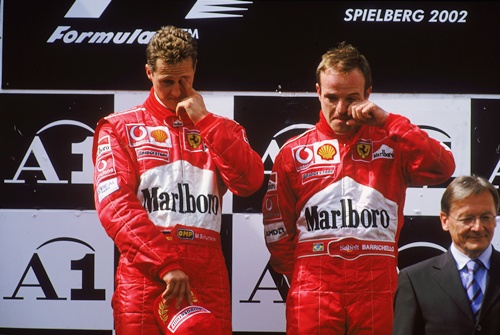 A black day for Formula One, with worldwide outrage after Ferrari ordered Rubens Barrichello, who had dominated the entire weekend and led from start to finish, to slow and allow Schumacher to win. He did so at the last corner.

There was no need for it.

The German had won four of the five previous races and ended up taking the title by a record margin. 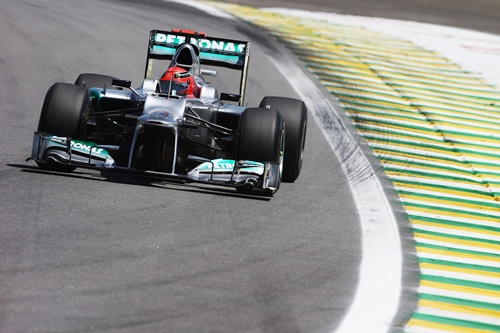 Schumacher, defending 10th place against Barrichello, impeded the Brazilian with a risky move that squeezed the Williams against the wall on the pit straight at around 300kph.

The German lost the place anyway and was handed a 10-place penalty on the grid for his next race.

Barrichello said it was the most dangerous move he had experienced in his F1 career.

Deliberately blocking the track during qualifying 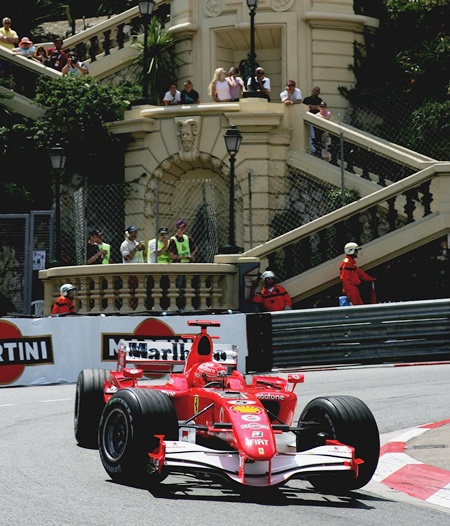 A BIT OF BOTH:

Schumacher again revived accusations of cheating when he was sent to the back of the grid for deliberately blocking the track in the dying seconds of qualifying, preventing rivals from beating him to pole position.

He atoned for it during the race, storming through to finish fifth and with the fastest lap.