'It won't affect our performance on the pitch. We are just concentrating on tomorrow's match' 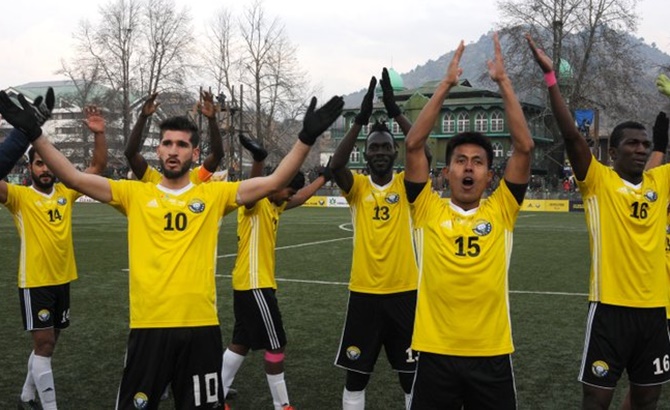 IMAGE: On the current crisis in Kashmir, RKFC’s coach Robertson said he never faced any issue in his stint spanning two and half years. Photograph: Real Kashmir FC/Twitter

Cut-off from families and relatives back home after a lockdown in Jammu and Kashmir, it was business as usual for Real Kashmir players as they trained hard amid a thick security cover on the eve of their Durand Cup opener against Chennai City.

The government, on Monday, decided to revoke provisions of Article 370, which gave special status to Jammu and Kashmir.

As a result, telephone networks internet were cut off in the valley with imposition of section 144 of the Code of Criminal Procedure with thousands of troops patrolling the streets to maintain law and order.

The Real Kashmir players arrived in three batches on Monday evening and it was only after landing did they realise that they couldn't contact their families.

"I've not spoken to my family since I left home. Yes I'm worried about my family because there has been no communication since landing here," their star player Danish Farooq said in an interaction at their practice venue, in Kalyani, West Bengal.

"But we are professional footballers. Your mind has to be ready for the match. I'm just being positive," Danish, who trained hard despite a stomach bug, added.

"It won't affect our performance on the pitch. We are just concentrating on tomorrow's match. This is just one day practice and we are preparing hard. We are trying our best to gel on the pitch as fast as we can. Being the first match of the season, we will give our best. Let's just hope to start off with a win tomorrow," said Danish.

The team's only Bengali recruit, mid-fielder Ritwik Das is worried about the mental state of his team members but added that it has not affected their training.

"Did their body language suggest that they were mentally affected? I don't think so. It was a full intensity training. Yes, it feels sad to see that my friends are not being able to contact their families back home. I really feel sorry them but all our focus is on the pitch tomorrow," Das said.

For the Snow Leopards, who narrowly missed the I-League title last season, finishing third behind Chennai and East Bengal in their debut, this was their first day, first session of the new season.

The side has numerous foreign staff with Scot Dave Robertson as the team's coach and Brit Jimmy Lindsay his deputy.

Robertson's son Mason has been the side's key player with his ability to play both as the centre half and a striker, while Scottish winger Kallum Higginbotham has also signed for them this season.

On the current crisis in Kashmir, Robertson said he never faced any issue in his stint spanning two and half years.

"Real Kashmir is all about being against the odds and coming up trumps. I have been saying this. I have been here for two and half years and I never had an issue. I am from Scotland and I don't need to be here, but I have also got my son here. If I had any concern, I would not be here."

They will face I-League champions CCFC, a team they had beaten twice in their fairytale last season.

The Scot however said he's not expecting too much as they would play their first match of the season with fresh legs, having trained this season for the first time, in Kalyani, on Tuesday.

One need not get too carried away by pre-season tournaments as it's more about getting back into the groove.

"It's early in the season we are not going to carried away. We have got three games in group stage, it will all about be team bonding, fitness. I'm not looking any further ahead in three games. We will give our best shot, use this as preseason, We still have 10 weeks to kick off the season. So we have to make sure everything is okay."

Accompanying the side, RKFC co-owner and chairman Sandeep Chattoo too echoed the similar sentiments.

On the communication blackout, he said: "I've come here last night. I've had no communication back home. I have no idea about the situation there. What I read in the newspapers is as good as you read. I can't add anything to it."

Chattoo further said I-League is 'the league' of the country but in case of a merger with Indian Super League they would not hesitate to play the latter.

"I-League is the league of the country. Our motto is to play the I-League. But if a situation arises, we will have no problem playing in the ISL. Club has to compete in a tournament -- be it I-League or ISL."

He further pointed out that they narrowly missed to win the I-League in their debut despite a match being cancelled.

"We led the table for a long period of time, and came third. It was our first time also. One game did not happen and the most critical game against East Bengal at home did not take place. It really makes a difference. But still we came third so we are proud of our club," he signed off. 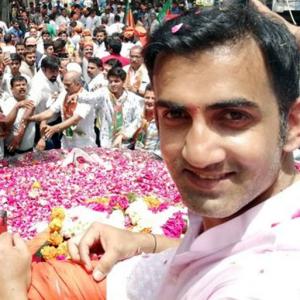