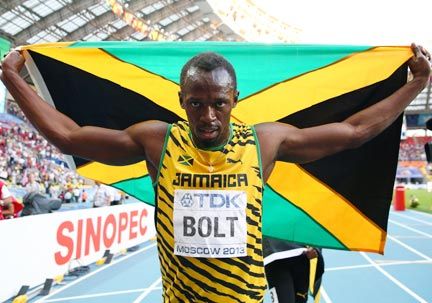 Usain Bolt completed yet another crushing sprint double on Saturday and hardly needed to extend himself to achieve it as he took his third successive world 200 metres title in the year's fastest time of 19.66 seconds - easing down.

Fellow Jamaican Warren Weir improved on his Olympic bronze by taking silver in a personal best 19.79 from lane eight while Curtis Mitchell won bronze for the United States in 20.04, just preventing another Jamaican podium sweep as he beat Nickel Ashmeade by a hundredth of a second.

Bolt, the world record holder with his 19.19 from Berlin four years ago, won the 100 metres last weekend having completed the sprint double twice at the Olympics and also in the 2009 world championships.

He was always in command from lane four on Saturday and halfway round the opening bend he loomed over diminutive British teenager Adam Gemili in lane five like an ocean-going liner swamping a dinghy, before disappearing into the distance.

After a slow start to the season when he was hampered by injury, Bolt has been on an upward curve in the last few weeks and his 19.73 in Paris six weeks ago was the fastest time of the year before Saturday's race.

American Tyson Gay, who ran 19.74 in June and was the last man to beat Bolt in a global 200 when he won the 2007 world championships, was unable to challenge him again in Moscow having failed a doping test.

After winning the 10 metres gold Bolt will hope to complete another hat-trick in the 4x100m relay on Sunday, when gold would draw him level with American trio Allyson Felix, Carl Lewis and Michael Johnson with eight world titles.

© Copyright 2021 Reuters Limited. All rights reserved. Republication or redistribution of Reuters content, including by framing or similar means, is expressly prohibited without the prior written consent of Reuters. Reuters shall not be liable for any errors or delays in the content, or for any actions taken in reliance thereon.
Related News: Curtis Mitchell, Warren Weir, Usain Bolt, Moscow, US
SHARE THIS STORYCOMMENT
Print this article