After seeing his world number one ranking slip away Rafa Nadal refused to loosen his iron-fisted grip on the Wimbledon title by crushing Andy Murray Friday to set up a final against the man who has knocked him off his perch.

Serbia's Novak Djokovic beat flamboyant Frenchman Jo-Wilfried Tsonga to reach his first Wimbledon final and guarantee top spot in next week's rankings and it briefly looked as though Nadal's day would get even worse when he was outclassed in the first set by home favourite Murray.

The defending champion's response was unsurprising, but staggering nonetheless, as he unleashed a furious onslaught to suck the life out of the fourth seed and roar to a magnificent 5-7, 6-2, 6-2, 6-4 semi-final victory on Centre Court. 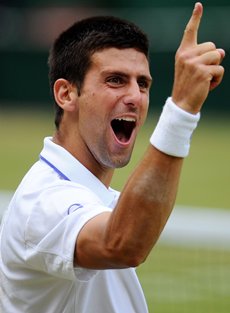 Murray, who lost to Nadal at the same stage last year and Andy Roddick the year before, will surely lie awake replaying the easy forehand he fired agonisingly long when up 2-1 and 15-30 on Nadal's serve in the second set.

The let-off left the door slightly ajar for Nadal and the 25-year-old force of nature needed no further encouragement, hurtling through it like a rampaging Mallorcan bull to take the next seven games.

From then on the outcome was never really in doubt and Britain's wait for a men's champion in the sport's blue riband tournament will stretch to at least 76 years.

"I was playing very high-risk tennis for most of the match," a despondent Murray told reporters when asked about the error.

"I went for it today and I started to make a few mistakes after that. Against Rafa you have to go for big shots. I slightly overhit that one. But, yeah, that point was one that I should have won for sure."

Nadal, who made just seven unforced errors in the three-hour duel, offered sympathy for his opponent whose wait for a first grand slam title goes on.

"I was little bit lucky," he said. "He had an easy forehand in the middle of the court and he miss. After that was probably the turning point of the match.

"Andy probably deserves to be a grand slam winner. He's the best player without a title of grand slam that I've ever seen."

While it was not what the vast majority of the 15,000 fans in Centre Court desired, Wimbledon will now get a dream final between the two best players in the world after Djokovic beat 12th seed Tsonga 7-6, 6-2, 6-7, 6-3.

The Serb, unbeatable this year until his 41-match winning streak was ended in the French Open semi-finals by an inspired Roger Federer, fought off the flying Frenchman in a match that at times resembled a circus act.

Between them they produced enough incredible rallies to fill a highlights DVD, one of which in the third set ended with both players flat out on the turf and the crowd going berserk.

When Tsonga saved two match points before snatching the third set tiebreak a repeat of his staggering comeback against Roger Federer in the last eight looked possible but Djokovic slammed the door shut.

After winning the match point Djokovic fell to his back before roaring to the sky and going down on his knees to kiss the grass.

"I guess you need to lose only one match in seven months to get to number one," Djokovic joked after ending Federer and Nadal's seven-year domination of the top ranking.

"When you know you're going to be the best in the world and you're reaching the finals of your favourite tournament, it's something special."

To complete what would be an extraordinary weekend the 24-year-old will now also have to break Nadal's 20-match winning streak at Wimbledon going back to 2008.

"I believe I can win against him," twice Australian Open champion Djokovic said. "I have really nothing to lose. I will step on the court and be aggressive, try to take it to him."

Murray did exactly that for an hour and a quarter, the time it took Nadal to earn his first sniff of a break point at 2-2 in the second set.

By that time Nadal was back in the groove and did not commit a single unforced error in the second set before breaking in the first game of the third to seize complete control.

Murray almost gave himself a lifeline when he had two break back points in the fourth game of the fourth set but Nadal would not be denied a fifth Wimbledon final in six years.

While the charts Monday will show that Nadal is no longer the best player in the world, should he complete a back-to-back French Open/Wimbledon double there will be few who do not regard his No. 2 ranking as a statistical anomaly.

"For me, seriously, that's something that really doesn't matter a lot," Nadal told reporters. "I said last year when I was number three or number four that being number one for me is not a big goal.

"Today I lost the it. One guy played unbelievable the first half of the year so he's the new number one. We just can congratulate him because what he did this first part of the season is something really impressive, really fantastic."

Gracious as he always is, however, the relentless Nadal will have even more motivation than normal Sunday and that is a scary prospect for Djokovic.

© Copyright 2021 Reuters Limited. All rights reserved. Republication or redistribution of Reuters content, including by framing or similar means, is expressly prohibited without the prior written consent of Reuters. Reuters shall not be liable for any errors or delays in the content, or for any actions taken in reliance thereon.
Related News: Andy Murray, Novak Djokovic, Jo-Wilfried Tsonga, Roger Federer, Centre Court
COMMENT
Print this article 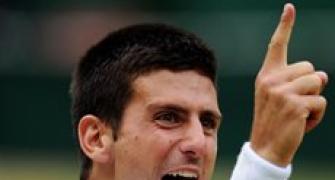 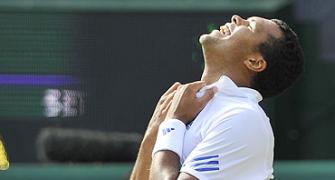 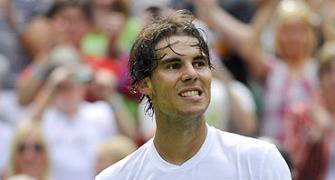 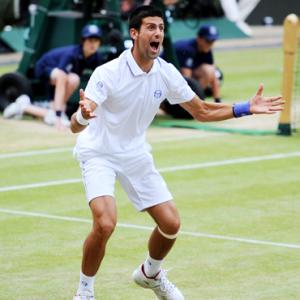 Steely Djokovic on top of the world