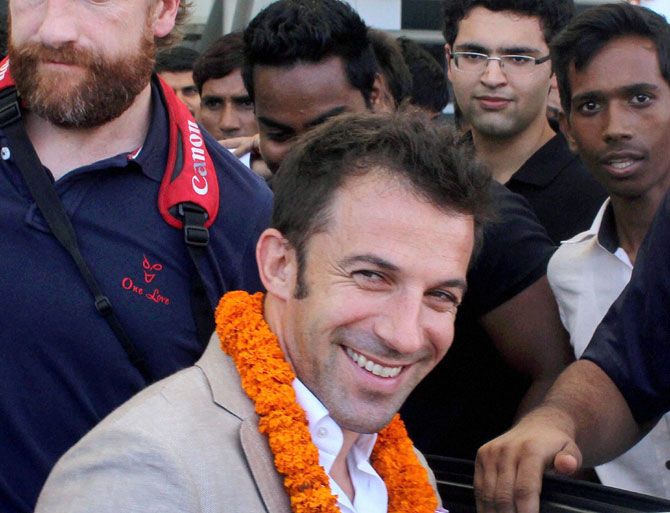 To the few uninitiated, Alessandro Del Piero, garlanded with marigold, was mistaken for a Hollywood star before football aficionados sent across the message that the biggest attraction of the inaugural Indian Super League had just landed in New Delhi.

Soon after arriving at Indira Gandhi International airport on Thursday, the 2006 Italian World Cup winner and Juventus legend, looking dapper in a light brown suit and sky blue shirt, headed for the training ground to meet his Delhi Dynamos teammates.

The 39-year-old will turn out for Dynamos as their marquee player in the much-awaited franchise-based football league, to be held at various venues across the country.

"I want to start training and am eager to meet my coach, teammates, staff and everyone involved. I am very excited to have come to India," Del Piero told reporters, moments after his Emirates flight landed at Terminal 3.

"Just landed in New Delhi, I'm well prepared for a new beginning…Ale," the handsome footballer posted on his Twitter handle.

The Juventus legend was accompanied by his brother and a photographer friend.

Nicknamed 'Il Fenomeno Vero' or the Real Phenomenon, Del Piero is 10th in the all-time top-scorers’ list in the Champions League and has featured in FIFA 100, a list of the top greatest living footballers, compiled by Pele.

Arriving in Turin as a teenager in 1993 and spending 19 years, including 11 years as captain at Serie A giants Juventus, he played alongside greats like Gianluigi Buffon and Zinedine Zidane.

With Juventus, he won eight Serie A titles, a Champions League and Coppa Italia. He has 91 international caps with the Azzuris and is best remembered for scoring the second goal in the semi-final against Germany in the 2006 World Cup.

He later scored in the penalty shoot-out in the final against France, giving Italy its fourth World Cup crown.

In 2012, he left Turin to join Sydney FC in the Australia A-League, and parted ways in April.