'I always fight like it's my first fight. When I start training I'm just like a blank slate, I learn everything again.' 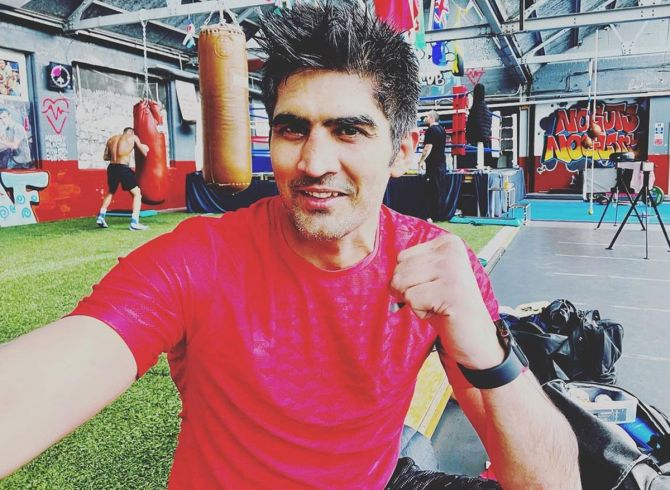 IMAGE: As he gears up for his next fight against the reigning national West Africa Boxing Union champion, Ghana's Eliasu Sulley on August 17, Vijender Singh's mantra is simple: remove all thoughts of the previous bouts. Photograph: Vijender Singh/Instagram

India's star boxer Vijender Singh does not want to carry the baggage of last year's maiden defeat on the professional circuit as he returns to the ring, saying: "I always fight like it's my first."

Since turning pro in 2015, Vijender was unbeaten till last March with an enviable 12-0 record, including eight knockouts.

But that changed in March last year, when his winning run was brought to an unceremonious end by Russia's Artysh Lopsan via a technical knockout in Goa.

"Record toh bante hi tutne ke liye hain. (Records are meant to be broken) It is all part of the game," an upbeat Vijender said.

As he gears up for his next fight against the reigning national West Africa Boxing Union champion, Ghana's Eliasu Sulley on August 17, Vijender's mantra is simple: remove all thoughts of the previous bouts.

"I always fight like it's my first fight. When I start training I'm just like a blank slate, I learn everything again. I listen to what my coaches tell me and start over," the 2008 Beijing Olympics bronze medallist said.

Frustrated by the lack of competition and COVID-19 restrictions, Vijender had arranged the bout with Lopsan. Fighting for the first time in 16 months, he had to do without his team which included trainer Lee Beard.

The British boxing trainer, who has trained professional stars like Ricky Hatton, has been guiding Vijender since the start of his professional career. Under his tutelage, the Haryana lad clinched the WBO Asia Pacific and Oriental super middle-weight titles.

However, Lee could not travel to India because of the COVID-19 restrictions.

Vijender, who delivered India's first Olympic and men's world championship medals in boxing back in 2008 and 2009, in retrospect, feels fighting without his team was a huge risk, one that cost him dear.

"I learnt an important lesson from that bout. In future, if somebody asks me for advice, I'll will tell them 'pro boxing is a serious business, don't ever go (to a fight) without your team. If you are absolutely sure then only go, otherwise don't take the risk'.'"

The 36-year-old was appalled by his own performance where after a minute and nine seconds into the fifth round, the referee had declared him the loser.

"Not at all, I was very confident then (before the fight). But when I saw my bout, I was shocked by my performance. I felt 'how did I do that? That is not Vijender Singh'."

All that is in the past now for the strapping six-footer, who seems poised to get his 13th win.

"Yes, pressure is there (to not slip to another loss) but I'm confident because I have my team around me.

"We have done a lot of sparring in UK and been through tough sessions and training. This time, I don't think there will be any type of problem or difficulty and if there is a problem my team is there to solve it."

Sulley boasts of a sparkling 100 per cent knockout record in the eight bouts that he has competed in but the 2010 Asian Games gold medallist Indian is up for the challenge.

"We have a plan against him. We have the strategy to counter him. We have analysed his fights, discussed what can be done. We will take him no problem," said Vijender, oozing confidence.

A sporting icon, whenever Vijender interacts with young and upcoming boxers in India, one is guaranteed to hear “Vijender bhaiya inspired us."

"Whenever boxers ask for advice I tell them 'whatever chance you get, grab it. There is only one life, there should not be regret'. In my life I have done everything whether it is politics, tv, movie etc.”

So, will Vijender contest elections a second time?

"Why not, I never quit. There's a saying Jab tak jeetega nahi, tab tak chodega nahi. (Keep trying until you win) So, I'll be doing that as well in the future," said Vijender, who had lost the 2019 Lok Sabha elections from South Delhi while contesting on a Congress ticket.

In a bid to take pro boxing to each corner of the country, Vijender will be fighting his next bout at the Balbir Singh Juneja Stadium in Raipur, which will be telecast on Sports 18 Khel and Voot on August 17 at 8.30pm IST. 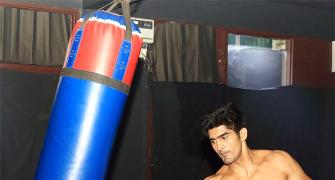 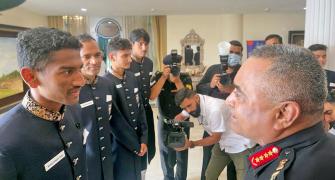 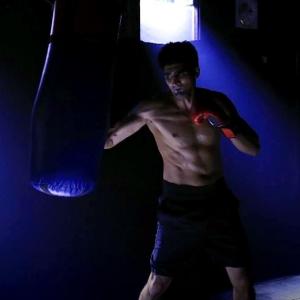 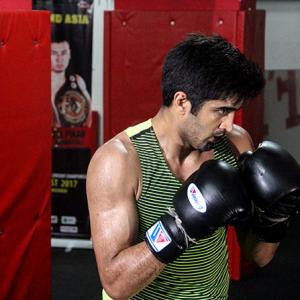 Will not rush things for world title: Vijender