Rohan Bopanna and his Pakistani partner Aisam-Ul-Haq Qureshi continued their fine form and advanced to the men's doubles quarter-finals at the US Open in New York.

However, it was curtains for India's Sania Mirza, who made an exit from the women's doubles after a third-round loss. 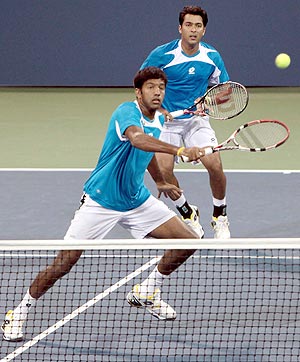 The fifth-seed pair of Bopanna and Qureshi defeated Australian Paul Hanley and his Belgian partner Dick Norman 6-2, 6-3 in a contest lasting a little over an hour.

They will now face the unseeded British duo Colin Fleming and Ross Hutchins, who got a walkover from their 13th-seeded Spanish opponents Marcel Granollers and Marc Lopez.

Bopanna and Qureshi converted all three break-points that came their way while holding their serve all through the match.

The fifth seeds struck 24 winners against their opponents' 10.

But there was disappointment for India in the women's doubles, as Sania and her Russian partner Elena Vesnina lost to the Czech pair of Iveta Benesova and Barbora Zahlavova Strycova.

Sania and Vesnina converted just one break-point out of the nine they earned and committed 31 unforced errors.

Bopanna-Qureshi out of Cincinnati Open