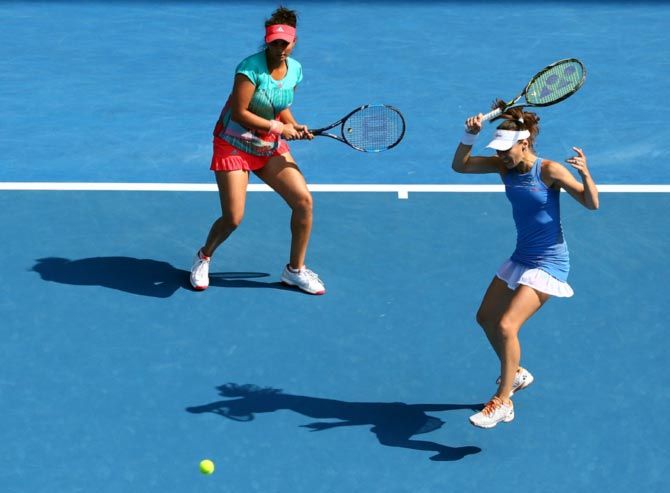 India's Sania Mirza and her Swiss partner Martina Hingis continued their stupendous run as they stormed into the final of the women's doubles after a straight-sets victory against Germany's Julia Georges and Karolina Pliskova of the Czech Republic, at the 2016 Australian Open, in Melbourne, on Wednesday.

Top seeds Sania and Hingis cruised to an easy 6-1, 6-0 victory in the semi-final match to extend their record winning streak to 35.

They will take on the Czech Republic duo of Andrea Hlavackova and Lucie Hradecka in the final.

Sania and Hingis broke their rivals twice in the first set, which lasted 26 minutes, before steamrolling the German-Czech combo in the second set.

The Indo-Swiss duo won the Wimbledon and US Open titles last year, before winning the season-ending WTA Finals.

World No. 1 team Sania and Hingis will look to win their third doubles Grand Slam title together following their triumph at Wimbledon and US Open last year. They have won 11 doubles titles together since they joined hands at Indian Wells in March last year.

Meanwhile, the Indian challenge ended in the junior girls event with the defeat of Karman Kaur Thandi and Pranjala Yadlapalli in both the singles and doubles events.

In the singles, Karman lost 6-3, 5-7, 5-7 to Sara Tomic of Australia in the third round while 10th-seeded Pranjala bowed out after a 5-7, 5-7 defeat against eighth-seeded Russian Anastasia Potapova.

Later in the doubles, the fifth seeded duo of Karman and Pranjala lost 6-7(3), 5-7 to the Australian pair of Maddison Inglis and Jaimee Fourlis.