Images from Champions League matches played across Europe on Tuesday 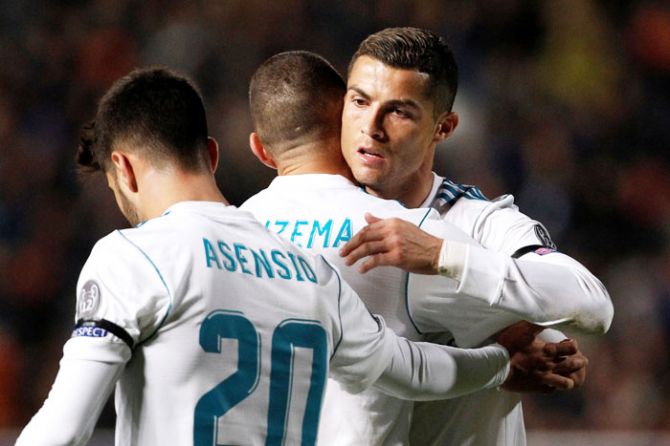 Holders Real Madrid sealed a place in the Champions League last 16 with a thumping 6-0 victory at APOEL Nicosia on Tuesday after doubles from Karim Benzema and Cristiano Ronaldo but will still finish runners-up to Tottenham Hotspur in Group H.

Ronaldo wrapped up Real's biggest Champions League away win with two goals at the start of the second half. He now has 18 in the competition this year, extending his record from 16 and taking his overall Champions League scoring record to 113.

Zinedine Zidane's side, who have been inconsistent in La Liga this season, were already coasting thanks to first-half goals from Luka Modric, a Karim Benzema double and Nacho strike.

Spurs' 2-1 win at Borussia Dortmund means they have claimed top spot on 13 points, with a game to spare, ahead of Real on 10 points. APOEL will fight it out with Dortmund for third place and a Europa League spot, with both teams on two points.

"We can't do anything about finishing second now. Other teams will not want to face us in the next round and we will do our best to qualify (from the last 16)," said Zidane.

"We know Ronaldo and Benzema are good players and they were going to score sooner rather than later. In a season you always have tough moments but we always thought they would improve." 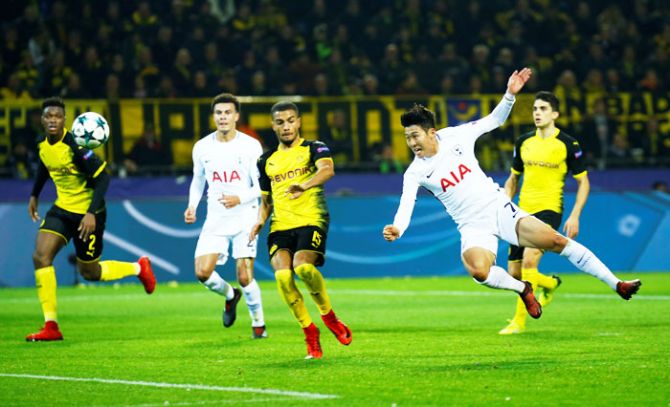 Already-qualified Tottenham Hotspur came from a goal down to beat hosts Borussia Dortmund 2-1 in the Champions League on Tuesday and secure top spot in Group H with a game to spare.

Spurs' top scorer Harry Kane cancelled out Pierre-Emerick Aubameyang's first-half strike in the 49th minute with his sixth goal of the campaign and Heung-min Son curled home the winner in the 76th.

Tottenham, with a superior head-to-head over the Spaniards, host the Cypriots in their last group game.

Dortmund, finalists in 2013, have two points along with APOEL and have missed out on the knockout stage. They will have to sweat it out on the last matchday to see if they can finish third and claim a spot in the Europa League. 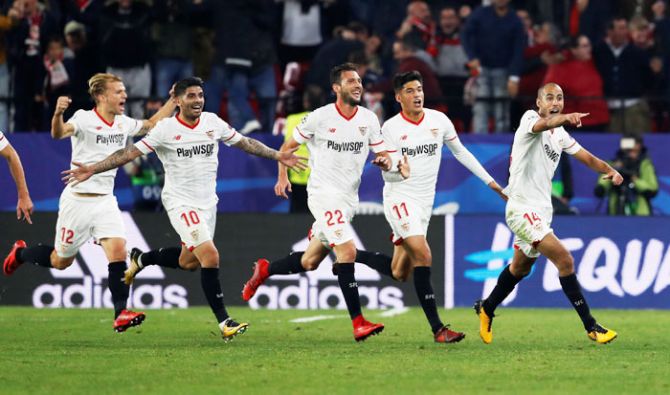 Liverpool displayed all the exciting forward play and calamitous defending that has been a hallmark of their inconsistent season in a thrilling 3-3 Champions League draw at Sevilla on Tuesday.

Swashbuckling attacking play saw Juergen Klopp's side slice through the shell-shocked home defence three times in 30 minutes before the visitors crumbled under pressure in the second half.

"It's obvious what we did, the real problem is we stopped playing football,” said Klopp.

"They fought back and well done to them. It feels like we lost but we didn’t lose.”

Liverpool looked assured of a place in the last 16 for the first time since 2009 after Roberto Firmino's double and Sadio Mane's header but their collapse means if they lose at home to Spartak Moscow in the last Group E game they may be eliminated.

Wissam Ben Yedder’s double for Sevilla pegged the Reds back and set up a frantic finale, which saw Guido Pizarro bundle the ball home from a corner in the third minute of stoppage time. 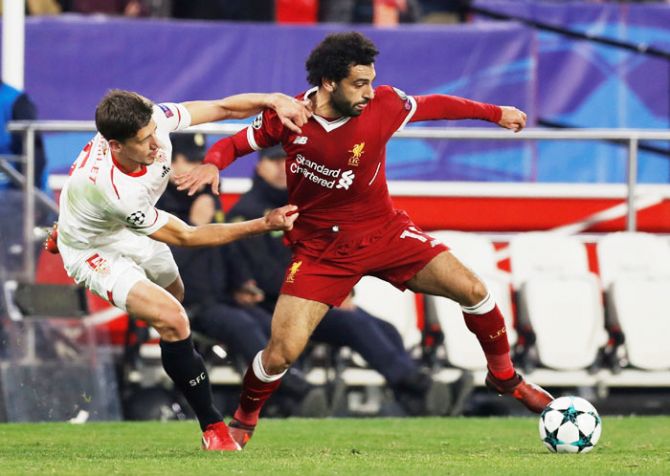 The draw is a blow to Liverpool’s confidence after five clean sheets in their seven previous games in all competitions.

Liverpool had chances in the second half but every time Sevilla attacked they looked like scoring. Nolito hit the post in the first half and Ben Yedder missed a sitter, which he made up for with two goals in 11 minutes early in the second period.

Former Sevilla left back Alberto Moreno committed a foul on the edge of the area which led to Sevilla’s first goal, when Ben Yedder headed in the resulting free-kick, and then gave away a penalty when he took out the striker, who converted it.

"We did not keep the ball and I did think the free kick and penalty decisions were soft to let them back in the game," said the England midfielder.

Sevilla ended up dominating the game, with Pizarro's late equaliser demonstrating that unless Liverpool improve at the back adding to their five European Cup triumphs is a pipe dream. Manchester City secured top spot in Group F with a 1-0 win over Feyenoord at the Etihad Stadium on Tuesday, making it five wins out of five for Pep Guardiola's side.

City, who were already assured of a place in the last 16, fielded a surprisingly strong line-up but struggled to find the kind of fluency that has characterised their peformances this season.

But two minutes from the end, Raheem Sterling grabbed the winner, slotting home after a smart exchange of passes with Ilkay Gundogan.

Sam Larsson had earlier twice gone close for Feyenoord while Guardiola gave debuts to teenagers Phil Foden and Brahim Diaz from the bench.

Napoli kept their hopes of Champions League progress alive with a 3-0 win over Shakhtar Donetsk in Group F on Tuesday.

A brilliant strike from Lorenzo Insigne opened the Serie A leaders' scoring in the 56th minute, the Italy international jinking in from the left and then firing a right-foot drive into the top corner from 25 yarsd out.

Napoli's Polish midfielder Piotr Zielinski missed a chance to double their lead when he shot over the bar after a defensive mix-up left him in a promising position.

But minutes later Zielinksi made amends, confidently slotting into the far bottom corner after a smart exchange with Dries Mertens.

Seven minutes from the end, Mertens made sure of the win when Shakhtar keeper Andriy Pyatov palmed out a Raul Albiol header straight to the Belgian forward who nodded home.

It left Napoli third on six points, three behind Shakhtar Donetsk, before the final round of games which sees Napoli away at Feyenoord and the Ukrainians at home to group winners ManchesterCity. 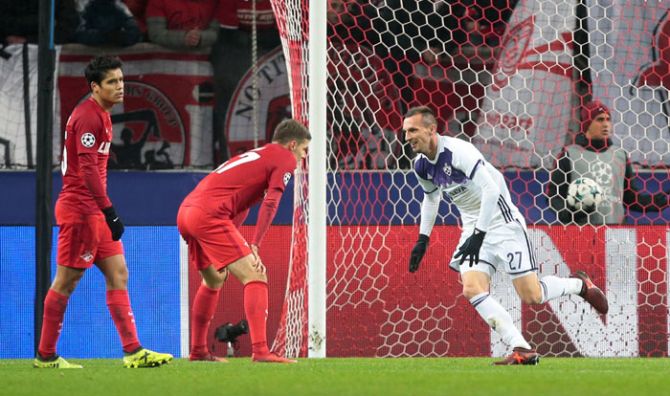 Spartak Moscow conceded a stoppage-time goal to draw 1-1 at home with Slovenians Maribor on Tuesday in a scrappy Group E clash that dealt a body blow to the Russian side's chances of reaching the Champions League knockout stages.

The result left Russian champions Spartak third in the group on six points from five games, two behind leaders Liverpool and one adrift of second-placed Sevilla.

The home side dominated throughout but were unable to break down a packed and well-organised Maribor defence until the 83rd minute when Ze Luis scrambled the ball past keeper Jasmin Handanovic from seven metres.

Just when it seemed Spartak were home and dry, late Maribor substitute Jasmin Mesanovic stroked the ball into an empty net after Marcos Tavares broke down the right and delivered a fizzing low cross which left the home team's defence flat-footed.

Despite Spartak's incessant pressure, it was the visitors who missed the game's best chance when central defender Marko Suler hit the post in the 50th minute after halftime substitute Dare Vrsic floated in an inviting free kick.

Ze Luis sliced a header off target in the first half and powered another one inches wide of the near post in the 77th minute before he finally found the net following a goal-mouth scramble to thrill the fervent home crowd.

Besiktas into knockout stage for first time with Porto draw 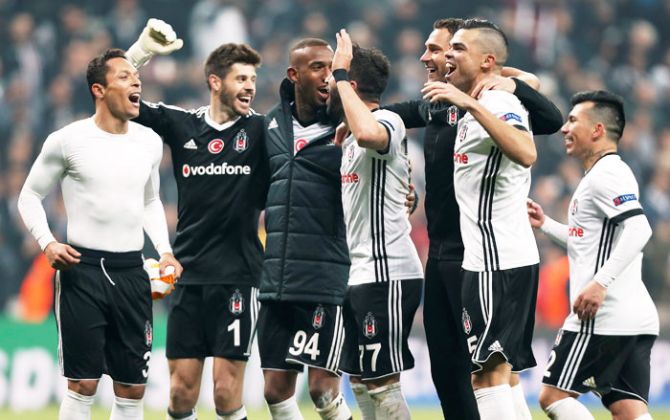 Turkish champions Besiktas reached the last 16 of the Champions League for the first time as they fought back for a 1-1 draw at home to Porto in their penultimate Group G match on Wednesday.

Besiktas are the first Turkish club ever to finish top of their group after they earned a point with a close-range equaliser by Brazilian Talisca in the 41st minute following a marvellous assist from Cenk Tosun who won the ball in midfield.

The hosts fell behind just before the half-hour when Porto's Felipe netted from a pass by Ricardo who cut the ball back from the byline but they recovered to make history.

Besiktas are top with 11 points from five games, with Porto second on seven ahead of Leipzig. The German side are three points behind the Portuguese before they visit bottom side Monaco, who have two points, later on Wednesday.

Porto have a better head-to-head record against Leipzig so Wednesday's draw leaves qualification in their own hands.

Monaco out of Champions League after Leipzig thrashing

Last year's semi-finalists Monaco crashed out of the Champions League in the group stages when they were beaten at home 4-1 by Leipzig on Tuesday.

The principality side never recovered from going 3-0 down in the first half an hour following a Fabinho own goal and two goals by Timo Werner.

Radamel Falcao reduced the arrears, only for Naby Keita to put the visitors 4-1 up on the stroke of halftime.

The result left Monaco bottom of Group G on two points from five games, with Leipzig on seven, level with second-placed Porto.

Besiktas top the Group with 11 points after their 1-1 home draw with Porto.

The defeat means Monaco will not even play in the Europa League this season.

© Copyright 2021 Reuters Limited. All rights reserved. Republication or redistribution of Reuters content, including by framing or similar means, is expressly prohibited without the prior written consent of Reuters. Reuters shall not be liable for any errors or delays in the content, or for any actions taken in reliance thereon.
Related News: Sevilla, Spartak, Shakhtar Donetsk, Liverpool, APOEL Nicosia
SHARE THIS STORYCOMMENT
Print this article 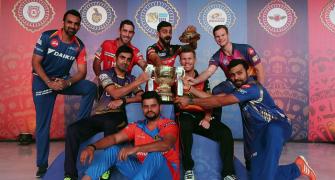 Did you know some IPL owners wanted auctions in England 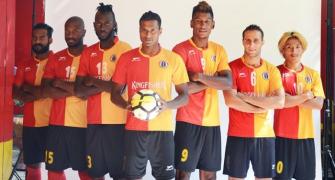 Why these Kolkata giants don't get investors 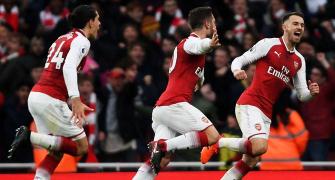 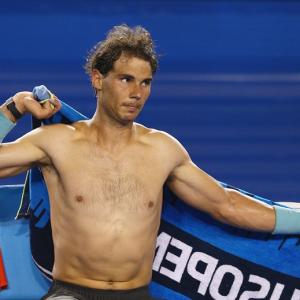 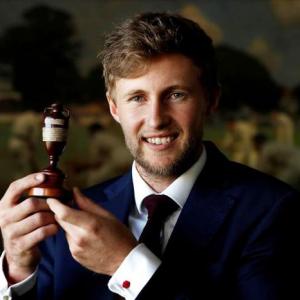 Ashes: England return to 'Gabbatoir' to face their demons