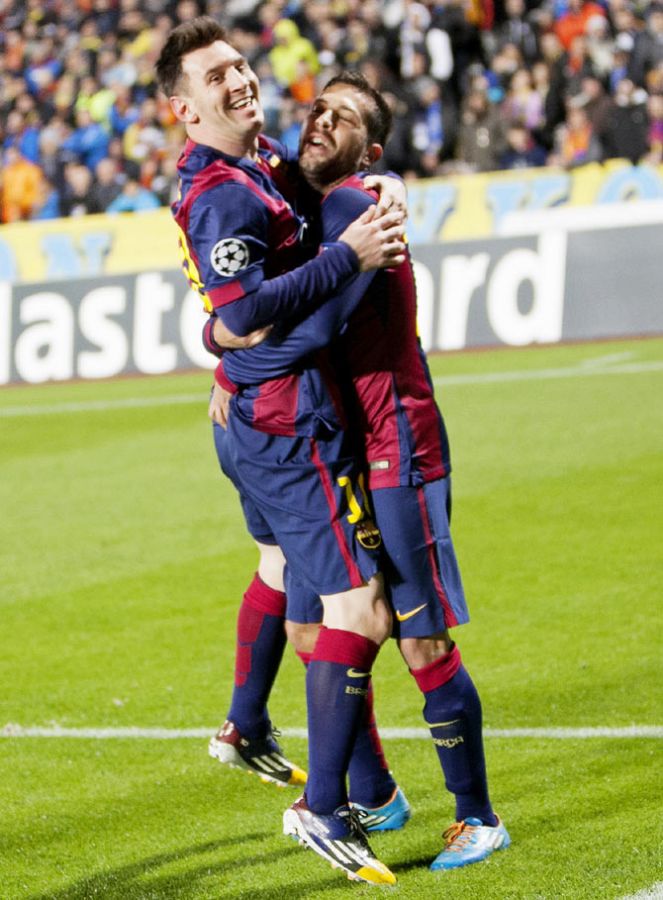 Lionel Messi was hailed as the best player ever by Barcelona coach Luis Enrique after setting a Champions League scoring record of 74 goals with a hat-trick in Tuesday's 4-0 win at APOEL Nicosia.

It was Messi's 28th Barcelona hat-trick, and his fifth in the Champions League. The Argentine now has 74 Champions League goals in 91 appearances in the competition, while Raul's 71 goals came in 142 games.

"Lionel Messi is the greatest player of all time, football is the king of sports and he will continue to surprise everyone for a long time," Luis Enrique said after Messi broke Raul's record of 71 goals.

He was also full of praise for Messi's fellow forward Luis Suarez who opened his account for Barcelona in the Group F match following his close season move from Liverpool.

"Suarez will score many more goals and he is a player who contributes much more than goals to the team," said Luis Enrique.

'He is a phenomenon' A Barcelona fan holds a scarf with Lionel Messi's name on it during the Champions League Group F soccer match between APOEL Nicosia and Barcelona on Tuesday. Photograph: Andreas Manolis/Reuters

Barca struggled to beat lowly Almeria in La Liga earlier this month and Luis Enrique was asked why his team had improved with a 5-1 win over Sevilla on Saturday and Tuesday's result.

"Changes in performance are expected throughout the season and the next job is to prepare the team for a difficult game against Valencia following a good victory over difficult opposition who haven't conceded a lot of goals in this competition,” he said.

APOEL coach Giorgos Donis heaped praise on Barcelona and record-breaking forward Messi, telling reporters the Spanish side were on "another level".

"He is a phenomenon and can do incredible things with a football," Donis said of Messi.