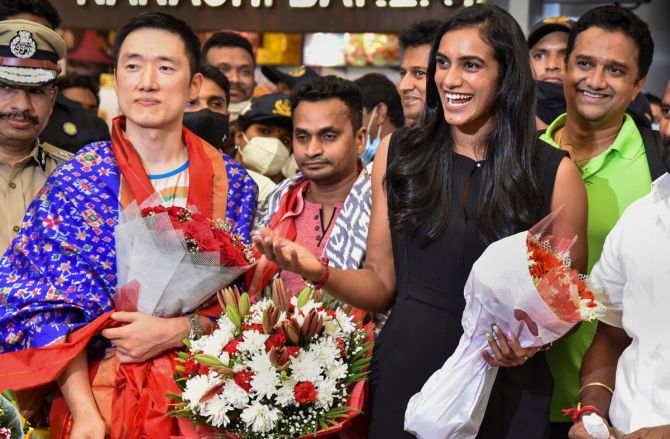 IMAGE: P V Sindhu and her coach Park Tae Sang on their arrival in Hyderabad on Wednesday. Photograph: PTI

The only Indian woman to win two Olympic medals, P V Sindhu was accorded a warm welcome after she landed in her home town on Wednesday following her bronze-medal winning feat in Tokyo Games.

Reigning World champion Sindhu, who had won a silver at the Rio Games five years ago, was received by Telangana Sports Minister V Srinivas Goud and other officials at the Rajiv Gandhi International Airport in Hyderabad.

Sindhu said the state government has supported her a lot in the past few years.

She also thanked the government for letting her train in the Gachibowli Indoor stadium in the city in the run-up to the Tokyo Olympics.

Sindhu was felicitated in New Delhi by Finance Minister Nirmala Sitharaman and Sports Minister Anurag Thakur after her return to India on Tuesday.

She had defeated China's He Bing Jiao in the bronze medal play-off on Sunday to become only the second Indian and first woman from the country to win two Olympic medals. 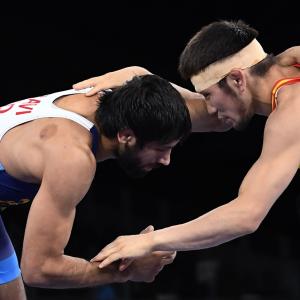 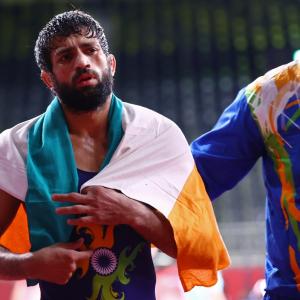