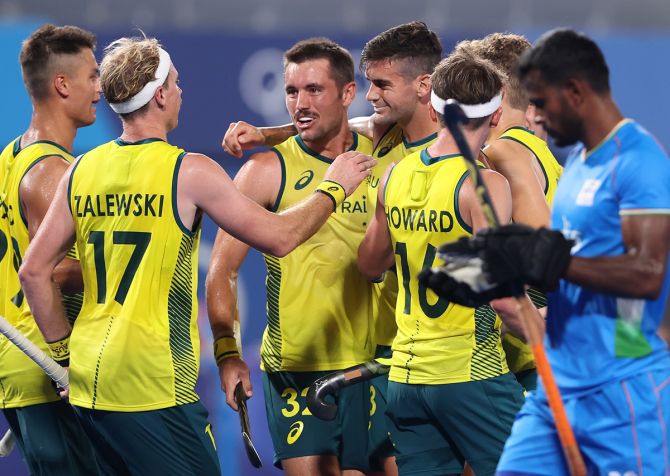 Eight-time Olympic champions India were humbled 1-7 by world No. 1 Australia in their second men's Pool A hockey match at the Tokyo Games on Sunday.

The mighty Aussies exposed every possible chink in the Indians' armour with a polished display to announce themselves as favourites for the gold medal.

The Kookaburras simply toyed with the Indian defence after the first quarter and scored at will to register their second consecutive victory in the men’s tournament, having fought back to beat Japan 5-3 in their opening match on Saturday.

It was India’s heaviest defeat since Australian coach Graham Reid took charge of the team in April 2019.

In the day's other matches, the Netherlands defeated South Africa 5-3, Argentina laboured to a 2-1 win over Japan and New Zealand beat Spain 4-3.

India's lone goal came from the stick of Dilpreet Singh in the 34th minute.

India, who next play Spain on Tuesday, had defeated New Zealand 3-2 in their opening fixture on Saturday.

The Manpreet Singh-led side simply failed to strike up a rhythm, as a result of which the defence came under relentless pressure.

The first quarter saw the Indians put up a semblance of fight, but that was all as the Kookaburras took control and scored at will.

It was India who had the first scoring chance. They earned a penalty corner in the eighth minute, but Harmanpreet Singh failed to deliver from the set piece.

A minute later, Dilpreet missed a golden chance from close range to level the scores.

India’s custodian PR Sreejesh then made a double save to keep the Australians at bay.

India were unlucky not to have equalised just seconds from the first quarter as Rupinder Pal Singh's low flick from their second penalty- corner was brilliantly saved on the goal-line by Andrew Flynn Ogilvie.

The second quarter completely belonged to Australia as they scored three goals in a span of five minutes to take the game away.

First, Hayward found the net from Australia's third penalty-corner and then Ogilivie slammed home from top right corner of the circle with a fierce hit past Sreejesh in front of the Indian goal.

If that was not enough, Beltz added to India's misery with a fourth goal, four minutes before half-time with a reverse hit.

The Indians showed some spark after the change of ends and attacked the Australian goal in numbers. In the process they secured three back-to-back penalty-corners but wasted all of them.

Four minutes into the third quarter, Dilpreet infused some life into the game by pulling one back for India, beautifully deflecting in Rupinder's defence splitting pass from midfield.

India wasted another penalty-corner in the 40th minute as Mandeep Singh failed to deflect in Amit Rohidas's lay-off.

But that was all India could manage as Australia slowly tightened their defence and withstood the pressure.

The Kookaburras turned the tide and scored three more goals to hand India a humiliating loss.

Govers scored twice in quick succession -- first from the spot and then from a penalty-corner -- before Tim Brand rounded off the tally by finding the net from a tight angle nine minutes from the hooter. 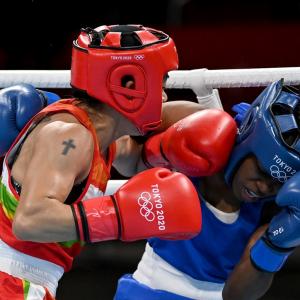