Tiger Woods tumbled out of the WGC-Accenture Match Play Championship on Thursday after fellow Americans Hunter Mahan and Dustin Johnson had eased into the third round with commanding victories. 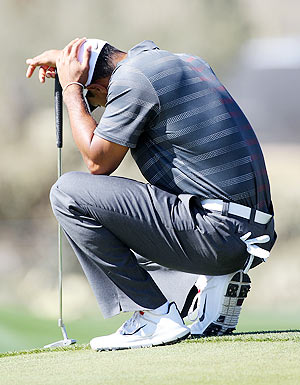 Three-times champion Woods, however, went out in the second round for a third time at the elite World Golf Championships event, struggling on the greens as he lost one-down to compatriot Nick Watney.

"I'm very happy to move on," Watney said after Woods had missed a six-foot birdie putt at the par-four 18th to keep the match alive. "I feel a bit fortunate, as well.

"We don't see him miss putts like that very often, and there were a few of them today. I don't think that this will be a day that either of us will look back on as far as putting goes."

Woods, who had been bidding for a first PGA Tour victory in over two years, took some comfort from the quality of his shot-making over the closing holes.

"I didn't miss a single shot coming in, which is good," the 14-times major champion said. "That was fun to hit the ball that well. Unfortunately I just didn't make a putt when I needed it."

British World No. 3 Lee Westwood reached the third round for the first time in 12 appearances at the event, beating Swede Robert Karlsson 3&2, and fourth-ranked German Martin Kaymer edged past American David Toms two up.

Triple major winner Ernie Els, who had upset world number one and defending champion Luke Donald in the opening round, was ousted 5&4 by Swede Peter Hanson.

In blazing desert sunshine, Mahan birdied six of the first eight holes to go four up on Yang and recovered from bogeys at the ninth and 10th to seal the win on the 15th green.

© Copyright 2020 Reuters Limited. All rights reserved. Republication or redistribution of Reuters content, including by framing or similar means, is expressly prohibited without the prior written consent of Reuters. Reuters shall not be liable for any errors or delays in the content, or for any actions taken in reliance thereon.
Related News: Woods, Dustin Johnson, Nick Watney, PGA Tour, Swede Robert Karlsson
SHARE THIS STORYCOMMENT
Print this article 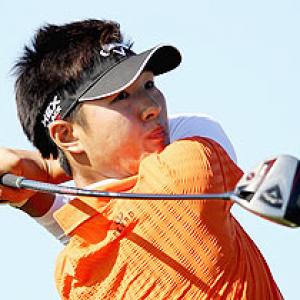 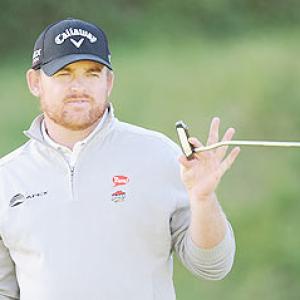 Heady day for Holmes with best score since surgery