Barcelona pulled off the greatest comeback in Champions League history by scoring three times in the dying minutes against a stunned Paris Saint-Germain at CampNou on Wednesday.

The result, which sparked delirious celebrations at Barcelona's 99,000-capacity Nou Camp stadium, sent the Spanish giants storming into the quarter-finals at the cost of the stricken Paris club.

Luis Enrique's side, who were hammered 0-4 in the first leg at Parc des Princes, went on to claim a 6-1 win over PSG in the second leg to reach the last-eight for the 10th straight season.

Following this stunning turn-around of fortunes for Barcelona, here is a flashback of some of the best come-from-behind wins recorded in Europe’s premier club competition. Arguably one of the best finals ever played, it earned Sir Alex Ferguson his first Champions League crown. However, it came the hard way.

A Mario Basler free-kick put Bayern ahead at the CampNou. The scoreline remained the same for the rest of the normal 90 minutes’ of play and victory in sight for the Germans.

However, in the first minute of added time, substitute Teddy Sheringham put United level and, two minutes later, another super-sub, Norwegian, Ole Gunnar Solskjaer, beat Oliver Kahn to complete a memorable turnaround, one that helped the Manchester team complete the treble that season. In the 2014-15 season, Bayern Munich's brilliant recorded a brilliant 7-4 (on aggregate) comeback win over FC Porto in the quarter-finals.

Down 1-3 in the quarter-final tie, after a shocking first leg defeat at the Estadio do Dragao, and missing a host of key players -- including the talismanic duo of Arjen Robben and Franck Ribery -- ahead of the return leg, Bayern had their backs to the wall.

However, instead of capitulating, the Bavarian side produced a stunning first-half display, going 5-0 up at the break, and completed the rout with another goal after it.

The result sealed one of the greatest comebacks in the history of the competition. Real Madrid is undoubtedly the most successful side in the history of the competition. At the same time, they were also at the receiving end many a time.

One of those instances was in the quarter-finals against Monaco in 2004.

Real comfortably won the first leg 4-2, and went 1-0 up in the return leg at the Stade Louis, courtesy their legendary striker Raul.

However, Ludovic Giuly sparked a Monaco comeback, scoring just before half-time. The principality club went further ahead through Fernando Morientes, on loan from Real, and it was 3-1 when Giuly scored again at the hour mark.

The tie ended 5-5 (on aggregate), and Monaco won a last four berth on the 'away' goals rule, and a meeting against Chelsea. 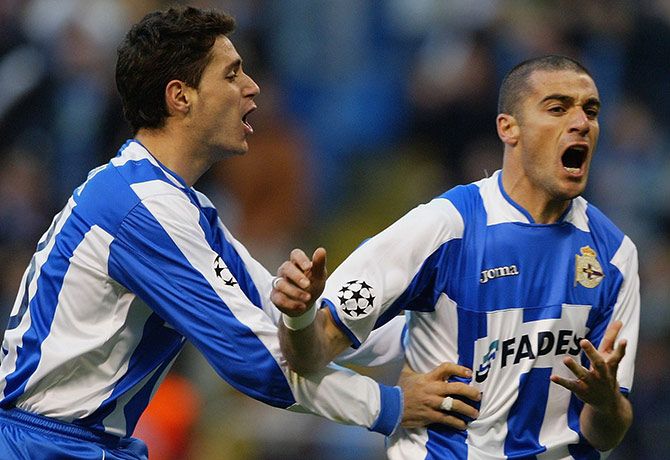 ‘Sometimes the other team has a perfect night.’

It was a shocking loss for Carlo Ancelotti’s side considering they had thrashed the Spanish side 4-1 in the quarter-final first leg.

However, it was the return leg in Galicia that produced one of the greatest comebacks in sporting history. The Rossoneri were blown away 4-0 at the Riazor stadium, losing 5-4 on aggregate.

Depor forwards Alberto Luque and Walter Pandiani, and the redoubtable Juan Carlos Valeron, were all on the score-sheet that evening. IMAGE: Liverpool players pose for a picture after winning the European Champions League final against AC Milan at the Ataturk Olympic Stadium in Istanbul, Turkey, on May 25, 2005. Photograph: Clive Brunskill/Getty Images

Now this is one all football fans are aware of.

It is referred to as the Miracle of Istanbul since.

Liverpool had everything going against them. Their last title had come in 1984, when the competition was still known as the European Cup, with Milan winning the competition four times thereafter.

Besides, Carlo Ancelotti’s was a better side as compared to Rafa Benitez’s.

And, true to form and expectations, Milan went 3-0 ahead, thanks to a goal by Paolo Maldini and a brace by Hernan Crespo.

Liverpool, though, remained resilient, and goals from Steven Gerrard, Vladimir Smicer and Xabi Alonso tied the game 15 minutes into the second half, resulting in a 3-3 tie that lasted until the end of regular time.

There were no goals in extra-time, courtesy some brilliant goalkeeping by Liverpool’s Jerzy Dudek, and the final went to penalties.

The Reds won 3-2 on spot-kicks to claim their fifth European title and complete a remarkable comeback. It was a turbulent season for Chelsea in every which way.

And it became worse for coach Andre Villas-Boas in their Champions League Round of 16 first leg tie at the Stadio San Paolo in Naples.

Villas-Boas’s decision to relegate the dependable duo of Frank Lampard and Ashley Cole to the bench was heavily criticised.

By the return leg the Portuguese coach was relieved of his duties, and Roberto Di Matteo took charge.

An inspired Blues’ side completed a memorable come-from-behind win at Stamford Bridge, Branislav Ivanovic scoring the winner in extra-time.

The Londoners went on to win their maiden title a few weeks later. 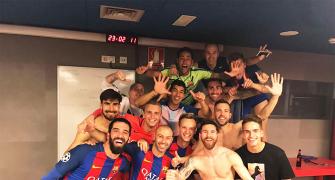 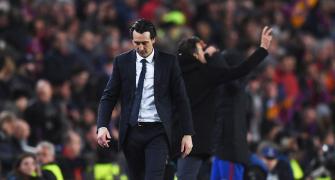 Where did PSG lose the plot? Emery searches for answers Barcelona pull off the mother of all comebacks