Maria Sharapova blocked out a 28-minute horror show to beat Jelena Jankovic and Victoria Azarenka eased past Maria Kirilenko to set up a heavyweight French Open semi-final in Paris on Wednesday.

Defending champion Sharapova lost her usual steely focus as she failed to win a game in a torrid opening set but the number two seed recovered to grind out a 0-6, 6-4, 6-3 victory.

Belarussian Azarenka's 7-6(3), 6-2 win over Kirilenko was straightforward by comparison although the third seed took a long time to break the Russian's defences on her way to a first semi-final at Roland Garros.

A repeat of last year's women's final between Sharapova and Italian Sara Errani is still on the cards, although Azarenka and world number one Serena Williams will have something to say about that in Thursday's semi-finals. Sharapova had been ice-cool on her way to the quarter-finals without dropping a set but as temperatures soared in the French capital for the first time, the 26-year-old looked flustered as her powerful baseline strokes flew long or looped into the net.

The error count mounted, her cheeks reddened and, for once, four-times Grand Slam champion Sharapova looked like a little girl lost as Jankovic, an old sparring partner from their days at the Nick Bollettieri Academy in Florida, seized control.

Russian Sharapova is renowned as one of the sport's fiercest competitors and quickly put the previous six games out of her head against the 18th seed to begin the inevitable fightback.

As she moved 5-1 ahead in the second set it was Jankovic's turn to lose her cool - with the Serbian ranting after almost every lost point to brother and coach Marko in the stands.

Jankovic, who had tape strips on both thighs and her right shoulder, refused to let Sharapova race away though and won three games before her opponent sealed the set.

The real Sharapova joined the party in the decider.

At 3-3 she pinged a forehand winner from out wide straight down the line and stood, fist clenched in a triumphant pose, as the courtside cameras clicked their appreciation.

There was still work to do as Jankovic earned a break point in the next game but Sharapova showed nerves of steel to plant a swinging forehand volley into the corner after her opponent had sent a recovery shot high into the Paris sky.

Mini-crisis averted, the Russian then broke a dispirited Jankovic to reach the last four for the fourth time in 11 attempts.

"It was just a case of erase that chapter and move forward because the match was not over," Sharapova said of losing a first set 6-0 for the first time since the 2012 Olympic singles final against Serena Williams when it proved terminal.

"I still felt like I was in the match and I was, I broke her in the first game and that was extremely important. I just fought really hard in the third set. It only gets tougher from here but I'm really happy to be at this stage again."

Azarenka needed 76 minutes to win the first set against the statuesque number 12 seed Kirilenko who needed treatment on her lower back.

Once she got her nose in front Azarenka never allowed the grand slam quarter-final debutant a route back as she repeated her victory in the Olympic bronze medal match last year.

"I think we know each other really well, so it was kind of difficult to surprise each other," said Azarenka, who won the Australian Open doubles with Kirilenko.

© Copyright 2020 Reuters Limited. All rights reserved. Republication or redistribution of Reuters content, including by framing or similar means, is expressly prohibited without the prior written consent of Reuters. Reuters shall not be liable for any errors or delays in the content, or for any actions taken in reliance thereon.
Related News: Maria Sharapova, Jelena Jankovic, Azarenka, Maria Kirilenko, Serena Williams
SHARE THIS STORYCOMMENT
Print this article 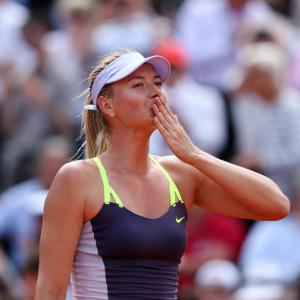 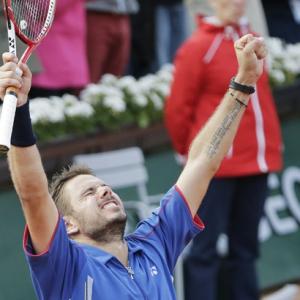 French Open: Can Wawrinka beat Nadal, the King of clay?