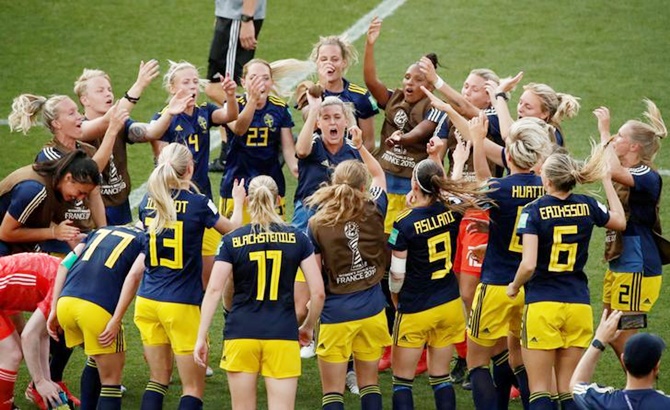 Sweden ended Germany's hopes of a third women's World Cup win, coming from behind for a surprise 2-1 quarter-final victory on Saturday thanks to goals from Sofia Jakobsson and Stina Blackstenius.

The Swedes now face a last-four clash with the Netherlands in Lyon on Wednesday after a win which means Olympic champions Germany will not have a chance to defend their title in Tokyo next year.

It was sweet revenge for the Swedes, who had lost the Olympic final to the Germans 2-1 in Rio de Janeiro in 2016 but who have now booked a place at their old rivals' expense in the 2020 Games in Tokyo.

Many will still look to the other semi-final, Tuesday's clash between England and the United States, for the likely winner of the tournament but the Swedes showed they should not be under-estimated with their swift counter-attacking style.

Germany began brightly and took the lead in the 16th minute through Lina Magull, who twisted her body perfectly to beat Hedvig Lindahl with a hooked volley.

Germany had not conceded a single goal in the tournament but their defence surprisingly failed to deal with a long ball down the middle from Linda Sembrant which Jakobsson latched onto and slotted home past goalkeeper Almuth Schult.

At the break, German coach Martina Voss-Tecklenburg threw on midfielder Dzsenifer Marozsan, who had not played since breaking a toe in their tournament opener against China, looking to add some much needed creativity.

Instead, just three minutes after the resumption, it was the Swedes who struck again.

Schult did well to turn away a powerful header by Fridolina Rolfo but the rebound fell kindly to striker Blackstenius, who fired home from point blank range for her second goal in as many matches. 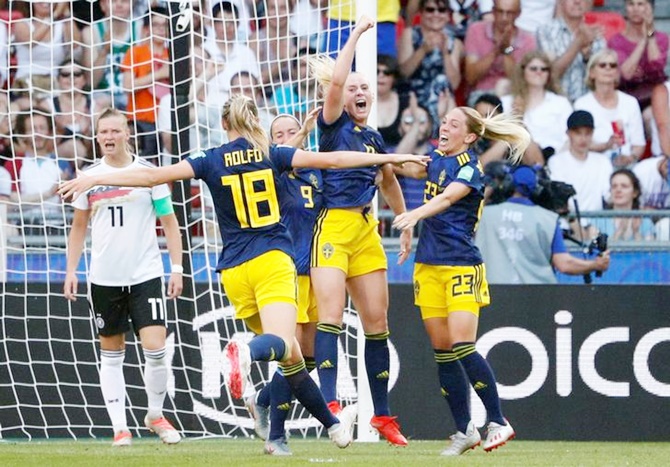 Substitute Lena Oberdorf missed a great chance to force the game into extra time when she headed wide with the goal gaping in the 80th minute but Sweden held their nerve to reach their fourth World Cup semi-finals.

There were tears on the faces of many of the Germany squad as the reality of their exit -- and Olympic absence - hit home hard.

"We wanted to do so much more. This should not happen like it did," said Magull.

"We had one, two good chances to equalise but did not manage it. That's a real shame. We knew they had fast players and wanted to defend high up the pitch," she said.

"That brings the danger of conceding on the counter, which had happened before the break."

The win was Sweden's first over Germany at a major tournament since 1995, having previously come close in the 2003 World Cup final and in the 2016 Rio final.

Netherlands, Sweden, along with Great Britain -- after England reached the last four on Thursday -- have qualified for the 2020 Olympics as the top three European teams at the World Cup. 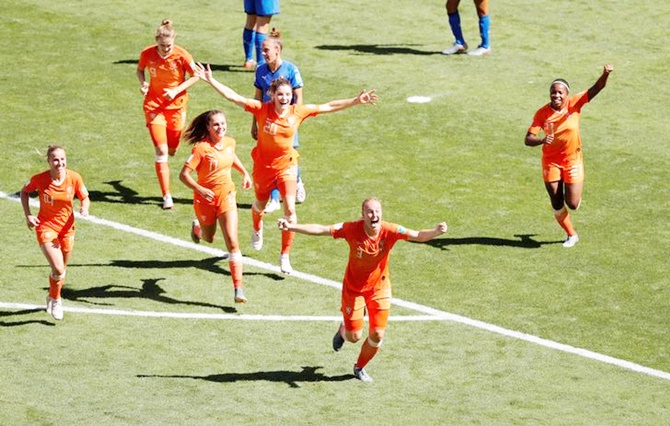 Second-half headers from Vivianne Miedema and Stefanie van der Gragt earned the Netherlands a 2-0 win over Italy earlier as they reached the women's World Cup semi-finals for the first time.

The Dutch, deserved victors in intense heat at the Stade du Hainaut.

Italy, who have never gone beyond the last eight, had the better of the chances in the first half but the European champions stepped up their game after the break and both goals came from quality set-piece deliveries from Sherida Spitse.

The Netherlands' left-sided play-maker Lieke Martens was passed fit despite suffering a foot injury while celebrating a goal in the previous round.

With the venue only a two-hour drive away from the Dutch border, the 22,600 crowd was mostly bedecked in Orange in the bright sunshine.

But despite those boosts, the Dutch initially struggled to create openings against an Italian defence well marshalled by captain Sara Gama.

The Azzurre had the first real chance when Barbara Bonansea's flick-on found Valentina Bergamaschi in the area but the midfielder's lob was too easy for Dutch keeper Sari van Veenendaal.

Bergamaschi had another chance when, after a smart interchange won her space in the box, she scuffed her shot and then moments later Valentina Giacinti pulled her shot wide from a promising position.

The Dutch coach Sarina Wiegman clearly took advantage of the break to address their problems and it was a very different approach after the interval.

The introduction of Lineth Beerensteyn for the out-of-sorts right-winger Shanice van de Sanden also helped the Dutch step up the tempo but when the breakthrough came in the 70th minute it was from a set piece.

Spitse, from wide on the left, whipped in a fine, high cross and the towering Miedema timed her run and jump perfectly, beating Laura Guiliani with a deft, glancing header.

Ten minutes later the game was put beyond the Italians when Spitse, this time from the right, delivered a flat cross which defender Van Der Gragt met with a firm header.

Italy had nothing left in the tank and it was cruise control from then on for the Dutch, who will now fancy their chances of reaching the final for the first time.

© Copyright 2020 Reuters Limited. All rights reserved. Republication or redistribution of Reuters content, including by framing or similar means, is expressly prohibited without the prior written consent of Reuters. Reuters shall not be liable for any errors or delays in the content, or for any actions taken in reliance thereon.
Related News: Stina Blackstenius, Sweden, Germany, Lina Magull, Almuth Schult
SHARE THIS STORYCOMMENT
Print this article Will Murray partner Serena at Wimbledon?