Suma returns after lay-off with a bang

World record holder Suma Shirur returned to competitive shooting after a long lay-off with a bang by firing 397 out of 400 in the women's 10m air rifle event at the Gun For Glory Shooting championship at the Balewadi Ranges in Pune.

Suma, who is based in Panvel near Mumbai, was the best of the lot finding 32 inner 10s. But she was given a tough fight by Pune youngster Priya Agarwal who matched her with 397 though with 26 bulls eyes to leave two-time Olympian Anjali Bhagwat in the third place with 394.

World Cupper Lajja Gauswami was at fifth with a sedate 392.

Railways shooter Suma had two 100s in the series and one 99 and 98 that put her in strong contention for the top of the podium finish. Priya too had a 100 and three 99s while Anjali could not find a perfect score. 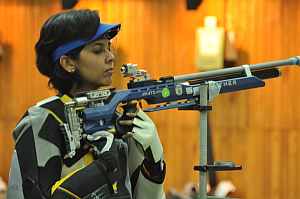 In third place was Neha Tokas of Delhi after a qualification rounds of 380.

Another Olympic quota holder Rahi Sarnobat was also off the boil and was placed fourth after a qualification series of 378.

In men's 10m Air Pistol, World Cupper Omkar Singh of Navy led the field with a total of 578 while Vijay Singh of Army was second at 576 followed by Gurpreet Singh, also of Army, who shot 575.

Sharma fired 593 with one 100 and though Raghunath had two 100s, his round was spoiled as he opened the contest with a 96. In comparison, Sharma had opened with 99 and carried on scoring the same score twice before he found the lone 100. Two 98s later on defined his day. 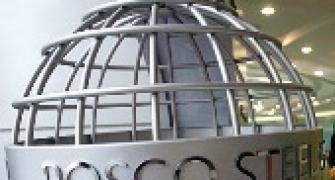 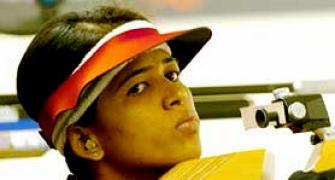