Chairman Zhu Jun, who holds a 28.5 percent stake, would only pay his share of the club's daily costs if his demands for greater control were not met, according to the China Daily. 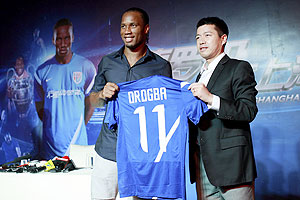 Zhu currently controls the Chinese Super League club along with five state-owned enterprises after becoming a shareholder in 2007.

The agreement was that if he invested $23.6 million over two years, his stake would increase to more than 70 percent, the newspaper reported.

The Oriental Sports Daily reported that Zhu had ploughed more than $94 million into the club in the past five-and-a-half years, while the state-owned companies had spent nothing.

The transfer of shares stalled in 2009 and again last year, a source told the Oriental.

"It is annoying and has had a bad effect on many of our tasks," a club official said.

"The biggest problem is that the operation and financing work of the club cannot be carried out normally.

"The equity stakes issue has become the biggest bottleneck for the development of Shenhua."

If unresolved, Zhu, who has been signing all the cheques, could decide to cough up just 28.5 percent of the club's expenditure, potentially affecting player salaries.

Colombian Giovanni Moreno missed the match against Shandong Luneng at the weekend amid speculation Shenhua had fallen short on his transfer fee with Argentina's Racing Club.

The futures of Drogba and Anelka could be in the balance if Shenhua fail to make their salary payments. Both reportedly earn over $300,000 a week.

Despite investing heavily in big-name foreign players, Shenhua sit 10th in the 16-team Chinese Super League on 27 points from 23 matches. Leaders Guangzhou Evergrande are on 47 points.

© Copyright 2020 Reuters Limited. All rights reserved. Republication or redistribution of Reuters content, including by framing or similar means, is expressly prohibited without the prior written consent of Reuters. Reuters shall not be liable for any errors or delays in the content, or for any actions taken in reliance thereon.
Related News: Zhu Jun, Shanghai Shenhua, Didier Drogba, Oriental Sports Daily, Nicolas Anelka
SHARE THIS STORYCOMMENT
Print this article