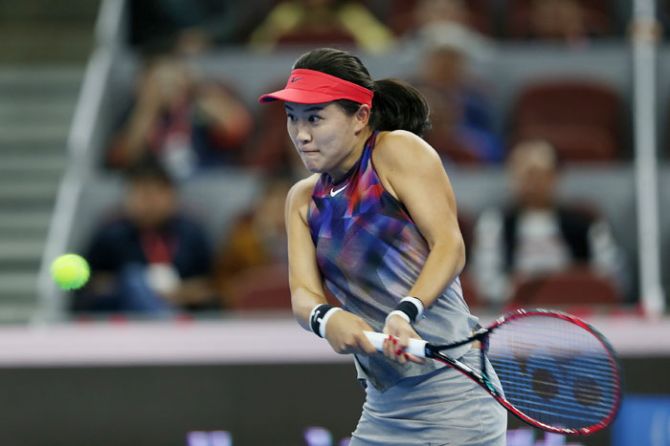 China's Zhu Lin staved off a mid-match fightback to upset Petra Kvitova for her maiden top 20 victory in the first round of the Tianjin Open on Wednesday.

The unseeded Zhu, who won 6-4, 5-7, 6-4 in the pair's first meeting, held her own in the early exchanges against the two-times Wimbledon champion.

Kvitova was the first to blink at 4-4 as she handed her rival the chance to break. The Czech world number 17 missed out on a break in the next as the unforced errors crept up on her game.

Zhu ran up a 5-4 lead in the second set and appeared on course for a comfortable win before Kvitova produced a flurry of winners to level the contest at 1-1.

World No 113 Zhu went on the attack, taking a 5-3 lead in the decider. She had two chances to seal the match on Kvitova's serve before eventually prevailing.

"I played so relaxed today," Zhu said after the match.

"In the second set I was serving for the match, but she played great to win this, and then I came back in the third set and I played like my first set, and I think I did it!

"I just played my match. I didn't think too much about the win, I just enjoyed the match." Japanese teenager Naomi Osaka fought back from an early break to stun Venus Williams in straight sets and move through to the quarter-finals of the Hong Kong Open on Wednesday.

Osaka, who prevailed 7-5, 6-2 for her best career win by ranking, double-faulted early in the opening set to hand seven-times grand slam champion Williams the advantage.

The 19-year-old broke back and levelled at 5-5 as the world number 5 looked to serve for a 1-0 lead. Osaka then pounced on Williams's serve to break again and took the first set.

"I feel like even if I hit one semi-short ball she would come in and crush it, so I had to play really well," Osaka said after the match.

Ranked 64 in the world, Osaka began to dictate terms in the second set, racing to 5-0. Williams held her serve to avoid the humiliation of a bagel and broke Osaka to make it 5-2.

A double fault by the 37-year-old handed Osaka two match points and the youngster took the first in style to gain revenge for her loss to the American in the third round at Wimbledon.

Williams has already qualified for the season-ending WTA Finals in Singapore. Others who have booked spots in the Oct. 22-29 event are Garbine Muguruza, Simona Halep, Karolina Pliskova, Elina Svitolina, Caroline Wozniacki and Jelena Ostapenko.

Meanwhile, Russia's Anastasia Pavlyuchenkova powered past American Jacqueline Cako 7-6(3), 6-1 to set up a clash with Osaka, while seventh seed Daria Gavrilova of Australia rallied to beat Shelby Rogers of the US 6-1, 2-6, 6-2. 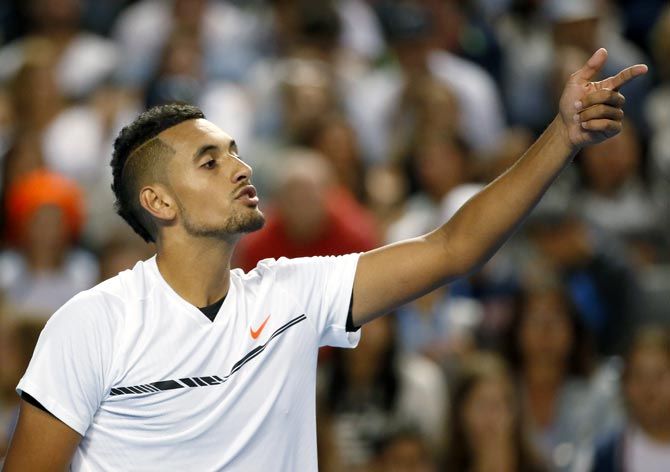 Australia's Nick Kyrgios has been fined $10,000 and deducted his $21,000 first-round losers' cheque following his decision to walk off after losing the first set against Steve Johnson in the Shanghai Masters on Tuesday.

The tempestuous Kyrgios had just been beaten in a tiebreak against Johnson when he walked to the net, offered his hand to the American and stormed off court to the bemusement of his opponent and chair umpire Fergus Murphy.

Kyrgios, 22, was booed off court by the crowd.

The ATP said on Wednesday that Kyrgios had been punished for "unsportsmanlike conduct", saying he had failed to complete a medical visit to explain his actions.

Kyrgios, ranked 21 in the world, said later on Twitter that he had been suffering with a stomach bug and a shoulder problem.

"I've been battling a stomach bug for the past 24 hours and I tried to be ready but I was really struggling on the court today which I think was pretty evident from the first point," Kyrgios said.

"My shoulder started to hurt in the practice which didn't help either and once I lost the first set I was just not strong enough to continue. I've not eaten much in the past 24 hours."

Last year, Kyrgios was fined $16,500 and banned for eight weeks for deliberately throwing a game during his second-round defeat by Mischa Zverev in Shanghai.

The ban for "conduct contrary to the integrity of the game" was reduced to three weeks after he agreed to a "care plan" under the direction of a sports psychologist.

He was also docked a penalty point against world number one Rafael Nadal in the China Open final last week following a disagreement with the chair umpire.

Italy's Fabio Fognini was provisionally suspended for two grand slam tournaments and fined $96,000 for his outburst at this year's US Open, the Grand Slam Board said on Wednesday.

Fognini directed vulgar language towards Swedish chair umpire Louise Engzell during his first-round loss to compatriot Stefano Travaglia and was subsequently disqualified from the tournament in which he was also playing men's doubles.

A statement from the Grand Slam Board, an independent body responsible for the establishment and enforcement of the grand slam rules, said it had found Fognini guilty of "Aggravated Behaviour and Conduct Contrary to the Integrity of the Game".

One of the two grand slam tournaments the 30-year-old faces a ban from must be the US Open, although the sanction will only be imposed if he is found guilty of another Grand Slam Major Offence during the next two years.

The fine will also be halved if the hot-headed Fognini, who was fined $24,000 at Flushing Meadows for his antics, stays out of trouble over the next two years.

"Mr Fognini accepts and will not appeal this decision and he has expressed remorse for his admitted misconduct," the statement said.

"He has confidence that he will meet the conditions necessary to reduce his financial penalty and to lift his Grand Slam tournament suspensions in the future."

The Indian mixed doubles pairings of Satwiksairaj Rankireddy/Ashwini Ponnapa and

Manu Attri/Maneesha K registered victories in the first round of Yonex Dutch Open badminton in Almere, Netherlands on Wednesday.

Title favourites India produced an impressive performance to outclass Japan 5-1 in their opening campaign at the 10th edition of the men' Asia Cup hockey in Dhaka on Wednesday.

In their first tournament under a new coach, India meant business and found the net in each quarter, twice in the third, to streamroll their less-fancied but tricky opponents.

The Indians will next play hosts Bangladesh in their next Pool A match on Friday.

India defeated Sweden 3-2 in a Group D match of mixed team event to set up a clash with Malaysia in the final stage of the World Junior badminton Championships in Yogjakarta, Indonesia.

India, who blanked USA, Hungary and Australia 5-0 in the last two days, registered wins in the men's singles, women singles and mixed doubles event, while losing the men's and women's doubles matches.

It was the mixed doubles combo of Dhruv Kapila and Mithula UK, who started the proceedings for India, defeating Carl Harrbacka and Tilda Sjoo 21-16, 16-21, 21-15.

Lakshya Sen, who won the Bulgarian Open this year, then dumped Colin Hammarberg 21-11, 21-9 in the men's singles match to give India a 2-0 lead.

Krishna Prasad Garaga and Dhruv then played their heart out before losing 21-17, 20-22, 16-21 to Adam Gozzi and Carl Harrbacka in men's doubles.

In the last match, women's doubles pair of Rutaparna Panda and Mithula UK lost 22-24, 17-21 to Ashwathi Pillai and Tilda Sjoo.

Indian cyclists added two gold, three silver and as many bronze medals on the penultimate day of Track Asia Cup at the Indira Gandhi Cycling Velodrome in New Delhi on Wednesday.

The team of Manjeet Singh, Dinesh Kumar, A Bike Singh and Manohar Lal won the first gold of the day for India when they snatched the win from Kazakhstan in team pursuit. They left behind Kazakhs to claim the first position. SAINCA secured the bronze in the event.

In the 3km individual junior pursuit, gold and silver were awarded to India’s Raju Bati (3:35.172s) and Anil Manglaw (3:41.888s) respectively. Anil pedalled the cycle with a speed of 50.192km/hr to claim the top honours.

SAINCA's Devkishan Sharan won bronze with 3:42.373s. Kazakhstan and UAE were far behind and ended 5th and 6th respectively.

Ashton Lambe of USA won the gold in the 4km individual pursuit. He caught and crossed Uzbekistan rider to win the title. Something similar happened for the bronze medal when 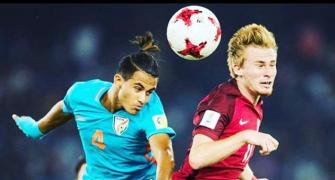 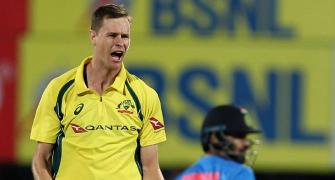 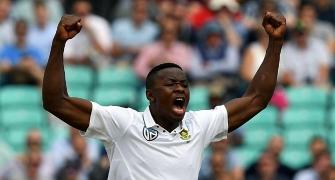 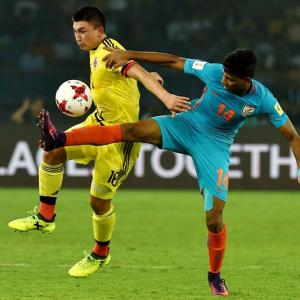 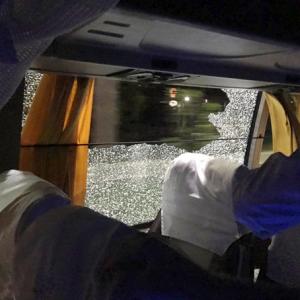