European champions Spain comfortably saw off France 2-0 in Paris, while a double from Peter Crouch helped England fight back to beat visiting Egypt 3-1.

Gonzalo Higuain scored a stunning goal as Argentina won 1-0 in Germany and Netherlands beat United States 2-1 in Amsterdam. Uruguay were 3-1 winners in Switzerland but world champions Italy could only draw 0-0 with Cameroon in Monaco.

First-half goals from David Villa and Sergio Ramos put a dominant Spain in charge against former world champions France and their hold on the game was rarely threatened.

The hosts continued to look short on confidence after having qualified for the World Cup via a controversial playoff against Ireland and the crowd vented their frustration by whistling under-fire coach Raymond Domenech during and after the game.

"This was a very important game. To beat a world champion like France gives you confidence," Spain captain Iker Casillas told reporters.

African champions Egypt outplayed England in the first-half at Wembley, a superb goal from Mohamed Zidan giving the visitors a deserved lead.

Crouch helped turn the game around for England after the break with a goal either side of a well-taken effort from Shaun Wright-Phillips.

Argentina striker Higuain staked his claim for a place in coach Diego Maradona's starting line-up with a wonderfully-taken goal against Germany, lifting the ball over the goalkeeper before finishing from 30 metres out.

After some unimpressive displays Argentina were the better team against the Germans, who only came to life near the end.

The Dutch needed a Dirk Kuyt penalty and a deflected shot from Klaas Jan Huntelaar to ease past the Americans while in-form Diego Forlan set Uruguay on their way to a 3-1 comeback win in Switzerland.

Other sides warming up for the World Cup with victories were Slovenia, who thumped Qatar 4-1, and Portugal who defeated China 2-0 in Coimbra.

Nigeria eased past Democratic Republic of Congo 5-2 while World Cup hosts South Africa fielded a weakened team at home to Namibia and needed a goal from Katlego Mphela to grab an unconvincing 1-1 draw.

Midfielder Zdravko Kuzmanovic shone for Serbia in their emphatic 3-0 victory in Algeria, Ghana lost 2-1 in Bosnia and Ivory Coast slumped to a 2-0 defeat in London against South Korea.

Other sides bound for the finals who failed to impress were Greece who conceded late goals to fall 2-0 at home to Senegal.

Slovakia were beaten 1-0 by Norway, Denmark lost 2-1 in Austria and Honduras slumped 2-0 in Turkey.

In other friendlies, Craig Levein celebrated his first game as Scotland manager with a 1-0 home win over Czech Republic and Sweden won 1-0 in Wales thanks to a superb volley by Johan Elmander.

© Copyright 2021 Reuters Limited. All rights reserved. Republication or redistribution of Reuters content, including by framing or similar means, is expressly prohibited without the prior written consent of Reuters. Reuters shall not be liable for any errors or delays in the content, or for any actions taken in reliance thereon.
Related News: Argentina, Gonzalo Higuain, Spain, England, Klaas Jan Huntelaar
SHARE THIS STORYCOMMENT
Print this article 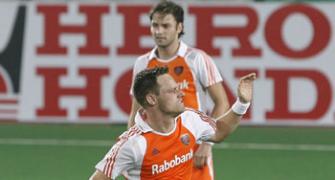