Sign in  |  Create a Rediffmail account
Rediff.com  » Sports » PHOTOS: The gold medalists on Day 7 of the London Games

PHOTOS: The gold medalists on Day 7 of the London Games 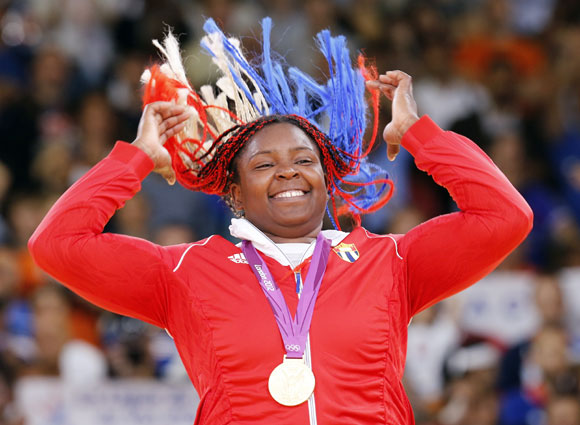 Ortiz, 22 and world number six, beat Japan's Mika Sugimoto in the final after she was awarded the win by the referee and two judges as the fight finished scoreless after extra time.

There was also a second medal in two days for the host nation when British outsider Karina Byrant, competing in her fourth Olympics, won bronze.

Veteran Bryant, 33, put in a convincing display to beat Iryna Kindzerska of Ukraine to the delight of the crowd at London's ExCel Centre. 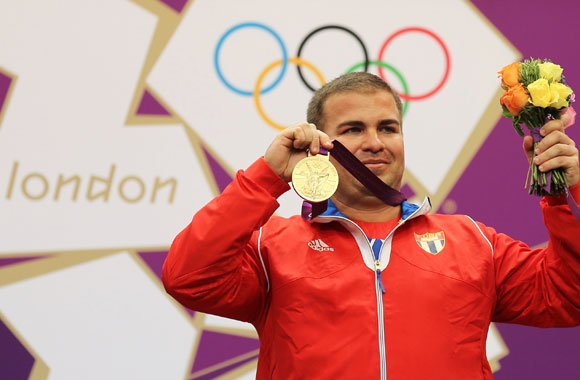 Cuba's Leuris Pupo proved he had the steadiest arm in the Olympic men's 25 meter rapid fire pistol final on Friday, grabbing gold with a record-equaling total.

The 35-year-old hit 34 of the 40 targets to finish ahead of Vijay Kumar of India in second with 30. Feng Ding of China was third on 27 before being eliminated after 35 shots.

The Cuban, ranked 21 in the world, showed little emotion as he shook hands and calmly embraced his five rivals after securing victory by matching the finals world record.

He had showed great consistency in hitting all five targets three times in the eight-round, time-constrained final in which shooters were eliminated as the competition went on.

Having started poorly by hitting three in the opening round, Pupo regained his composure and, after his run of fives, finished with four scores of four to claim victory.

The many Indian supporters at the Royal Artillery Barracks were rewarded for their support when 26-year-old Kumar claimed a surprise silver.

There was big disappointment for Russian Alexei Klimov who had scored 592 to improve his qualifying world record mark by one but was eliminated in fourth place after hitting 23 of 30 targets. 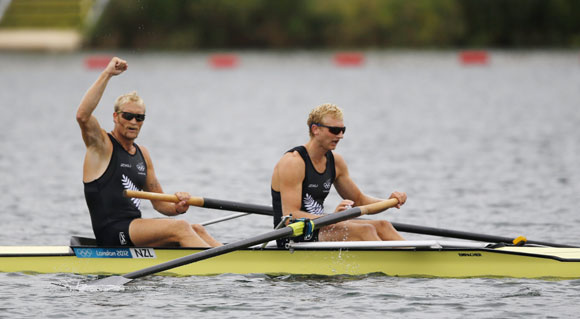 Hamish Bond and Eric Murray of New Zealand dominated their rivals by nearly five seconds to win gold in the men's pair at the Olympic rowing regatta, maintaining their three-year unbeaten run in the event.

Bond and Murray, one of the most dominant crews in the sport, won in a time of 6 minutes 16.65 seconds. France was two lengths behind to take silver and Britain won bronze.

The Kiwi pair haven't lost a race since joining forces after the Beijing Games in 2008, where they were part of a quadruple sculls boat that failed to reach the final despite being gold-medal favorites.

They gained redemption at Dorney Lake, however, and will go down as one of the best crews of their generation. 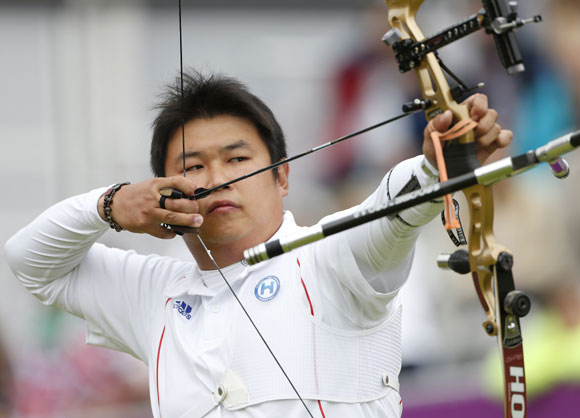 Oh Jin-hyek won South Korea's first Olympic gold in the men's individual archery Friday for a near clean-sweep for his country in London.

The country also won gold in the women's individual and women's team events and was the bronze medalist in the men's team.

"My dream was to compete at this Olympics. On top of that I have a gold medal, so I am very happy man," said the third-seeded Oh, who was at his first games. "If you talk about the secret to strong archery in Korea, I don't know. But many Koreans are very strong at perseverance and I am one of them."

Dai Xiaoxiang of China took bronze with a come-from-behind 6-5 victory over Dutchman Rick van der Ven in the third-place match following a shoot-off. Having been 4-0 down, Dai hit a 10 in the sudden-death shoot-off at the end of the tense contest, piling the pressure on Van der Ven, who only managed an eight.

Dai had just missed out on a chance at gold, however, when he fell in a shoot-off to Oh in the semifinals.

"This is not what I wanted," Dai said of his bronze.

Top seed and new world record holder Im was beaten by Van der Ven in the last 16 earlier on the final day. Im set a 72-arrow world best in the Olympic ranking round last week but slipped up against Van der Ven, losing 7-1.

But Oh's win continued South Korea's dominance after Ki Bo-bae took women's individual gold Thursday to follow up on the gold and bronze in the team events. Oh was part of South Korea's men's team

Dutchman Van der Ven exceeded all expectations to make the last four after he only qualified for the Olympics in June.
He took an early lead in the bronze medal match, but China's Dai stormed back to win the third and fourth sets. The players shared the fifth, forcing the shoot-off, where Dai edged it for China's second medal in the archery.
South Korea topped the archery table with its three golds and a bronze. Italy was second after winning men's team gold, and China was third overall with a silver and Dai's bronze.
Tags: Dai Xiaoxiang , Van der Ven , South Korea , China , Takaharu Furukawa 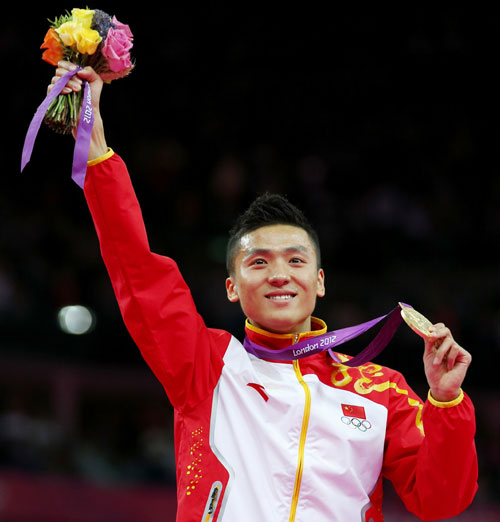 China's Dong Dong bounced to Olympic gold on Friday at the men's trampoline event of the gymnastics with an overall score of 62.990, leaping past Russia's Dmitry Ushakov, who took silver.

The 23-year-old Dong swapped places with fellow countrymen Chunlong Lu, who took gold in Beijing four years ago and is only five days older than Dong.

As he came to the close of his 10-move final routine, Dong shouted out, the crowd erupted in cheers and he left the trampoline exhausted with his arms around his coach. 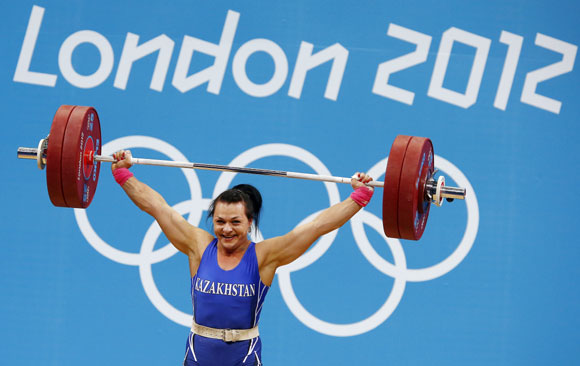 Weightlifter Svetlana Podobedova of Kazakhstan triumphed in a dramatic duel with Russia's Natalya Zabolotnaya to win the gold medal in the last lift of the women's 75-kilogram weight class.

The two were neck and neck through the competition, outdoing each other lift by lift and breaking each other's Olympic records in the process.

Podobedova lifted 161 kilograms in her final clean and jerk to equal Zabolotnaya's total of 291 kilograms but winning the gold because of lower body weight.

Iryna Kulesha of Belarus was a distant third with 269 kilograms. 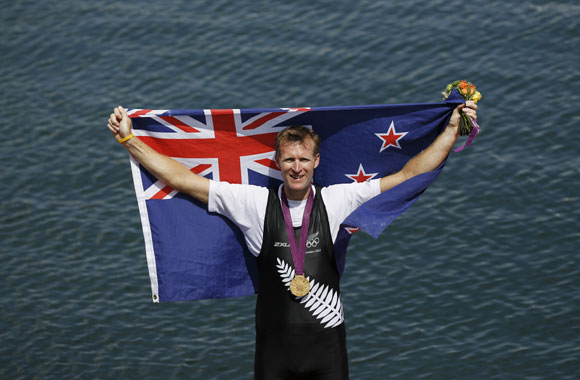 New Zealand's Mahe Drysdale held on for victory in the men's Olympic single sculls on Friday to cement his position as one of the sport's most successful scullers and gain redemption for his bitter loss at the Beijing Games.

Drysdale slowly moved through his fierce rival Ondrej Synek from the Czech Republic in a thrilling side-by-side race that was only settled in the final 200 meters of the clash.

Five-times world champion Drysdale had started the race as the favorite with the fans after his torrid time in Beijing, where he was hit by a virus and dehydration.

Despite being ill he jumped out to a lead in that race and held on until the final 100 meters of the 2,000 meter course before being overhauled by 2004 champion Olaf Tufte of Norway and Synek. A vomiting Drysdale then had to be taken away for treatment and later helped on to the podium to receive his bronze medal.

Synek again took the silver in London and Britain's Alan Campbell the bronze. 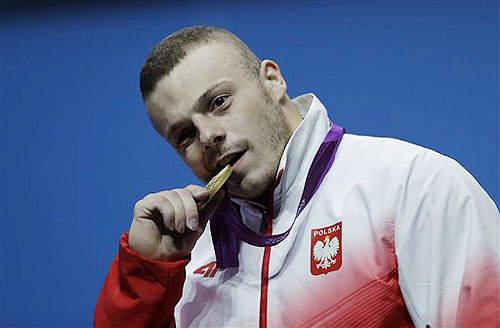 Adrian Zielinski collected Poland's first gold medal in the London Olympics and its first in weightlifting in 40 years as he won a close battle for the 85-kilogram category on Friday to break Asia's grip on the competition.

Zielinski's total weight of 385 kilograms equaled the result of Russia's Apti Aukhadov, but the Pole won the gold by virtue of lower bodyweight. World champion Kianoush Rostami of Iran got the bronze.

Poland had not won an Olympic gold medal in weightlifting since Zygmunt Smalcerz's flyweight triumph in 1972.

Dozens of Polish fans in the Excel center chimed in as Zielinski bellowed out the national anthem at the medal ceremony.