Katerina Siniakova overcame a slow start to win her maiden WTA Tour title with a 6-3, 6-4 victory over Alison Riske in the Shenzhen Open final on Saturday. 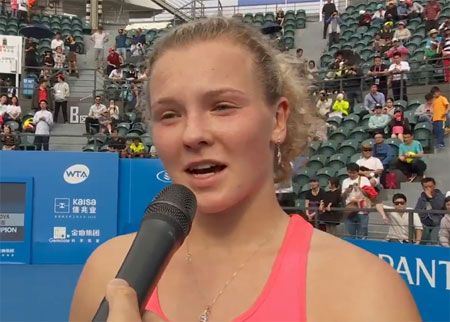 The Czech world number 52 had beaten top-10 players Simona Halep and Johanna Konta on her way to the final and fulfilled her promise as a junior with a first senior title after losing her two previous WTA finals in Bastad and Tokyo last year.

The 20-year-old Siniakova suffered an early break but fought back against her American opponent by reeling off four straight games to take control of the opener before she broke twice in the second set on the way to a 78-minute triumph.

"It's been a really great week for me and I'm so glad that I won this time because this match was really tough. I didn't play my best but I'm really happy that I did it," Siniakova said at the presentation.

"It's a great start to the year for me. I hope my performance continues to go up and get better."

The 39th-ranked Riske lost her fourth final, including a third defeat in a title decider in China, as her wait for a first trophy since 2014 continues.

"She was the better player today and for sure deserved to win the title," Riske said.

"I'm very pleased with my week, even if I did lose today. It's a step in the right direction and I look forward to my next tournament and the rest of the year."

© Copyright 2022 Reuters Limited. All rights reserved. Republication or redistribution of Reuters content, including by framing or similar means, is expressly prohibited without the prior written consent of Reuters. Reuters shall not be liable for any errors or delays in the content, or for any actions taken in reliance thereon.
Related News: Katerina Siniakova, WTA, Alison Riske, Simona Halep, Johanna Konta
COMMENT
Print this article