Italian MotoGP rider Marco Simoncelli has died after a horrific crash at the Malaysian Grand Prix in Sepang on Sunday.

Organisers confirmed the 24-year-old had died after the race was cancelled following his crash on the second lap. Simoncelli fell and was hit by Colin Edwards and Valentino Rossi as he slid across the track on his Honda.

Simoncelli's helmet was knocked off in the incident and the season's penultimate race was immediately red-flagged.

Yamaha's Edwards also came off his bike but escaped serious injury, while Rossi was able to nurse his Ducati back to the pits. 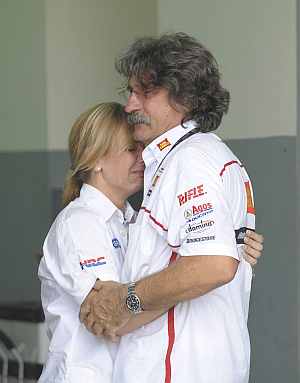 Simoncelli lay stricken on the track before being taken to the circuit's medical centre where he was pronounced dead.

Casey Stoner, who won his second MotoGP title at his home Australian Grand Prix last week, said: "As soon as I saw the footage it just makes you sick inside.

"Whenever the helmet comes off that's not a good sign."

Simoncelli's death is the first in the premier class since another Honda rider, Daijiro Kato, was killed at the 2003 Japanese Grand Prix.

Simoncelli, known for his shaggy afro haircut and fun-loving personality, began in the 125cc class in 2002 before moving up to the 250cc class in 2006.

© Copyright 2021 Reuters Limited. All rights reserved. Republication or redistribution of Reuters content, including by framing or similar means, is expressly prohibited without the prior written consent of Reuters. Reuters shall not be liable for any errors or delays in the content, or for any actions taken in reliance thereon.
Related News: Marco Simoncelli, Valentino Rossi, Honda, Shoya Tomizawa, Daijiro Kato
COMMENT
Print this article
Can't give MARCOS for anti-terror hubs: Navy
Japanese MotoGP rider Kato dies from injuries 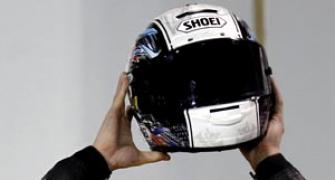 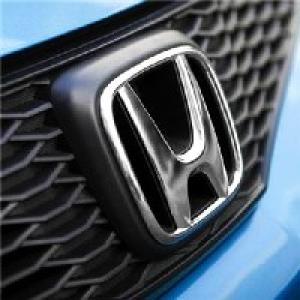