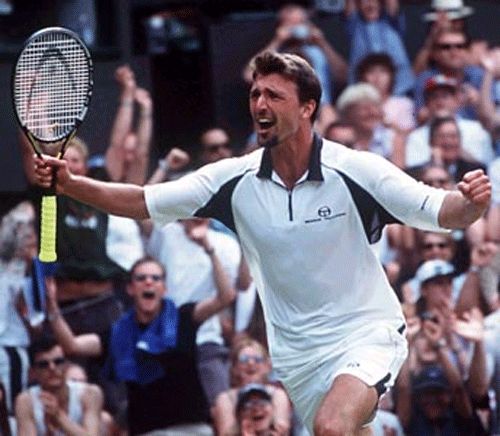 IMAGE: Goran Ivanisevic, who remains the lowest-ranked player to win Wimbledon and the only male player to win a Grand Slam singles title as a wildcard, also collected a singles bronze and doubles bronze at the 1992 Barcelona Olympics. Photograph: Clive Brunskill/ALLSPORT/File

Big-serving left-hander Goran Ivanisevic, a former Wimbledon champion who won two Olympic bronze medals, headlined the list of four candidates up for induction into the International Tennis Hall of Fame.

Ivanisevic, who was known for his serve-and-volley style of play, was ranked 125th in 2001 when he was given a wildcard into that year's Wimbledon.

The towering Croat made the most of his opportunity as he went on to knock out three players who were former or future world number ones before he beat Australia's Pat Rafter in a five-set battle in the final.

Ivanisevic, who remains the lowest-ranked player to win Wimbledon and the only male player to win a Grand Slam singles title as a wildcard, also collected a singles bronze and doubles bronze at the 1992 Barcelona Olympics.

Former World No 2 Martinez won 33 singles titles, including at Wimbledon in 1994 when she beat nine-time champion Martina Navratilova in the final.

Martinez, who spent 190 weeks ranked inside the world top five, also collected 13 doubles titles to go along with three Olympic medals in doubles while also serving as a key member of five championship Fed Cup teams.

Spanish clay court great Bruguera won back-to-back titles at Roland Garros in 1993 and 1994, the first which came against two-time defending champion Jim Courier in the final after coming back from 2-0 down in the fifth set.

The Class of 2020 will be announced in January with an induction ceremony scheduled for July 18 at the Newport, Rhode Island-based Hall of Fame. 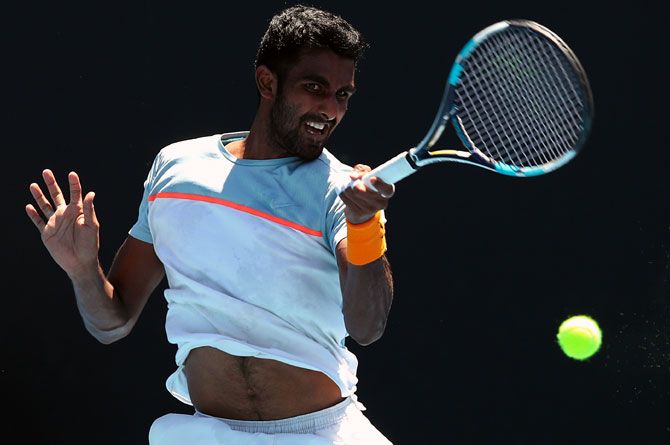 Top two seeds Benoit Paire and Denis Shapovalov cruised into the third round of the Winston-Salem Open with straight set wins on the North Carolina hardcourt on Tuesday.

Top seeded Paire was businesslike in his 6-3, 7-5 dismissal of Prajnesh Gunneswaran, crushing his 14 ace on match point to avenge his loss to the 29-year-old at Indian Wells in March.

Paire's win sets the stage for a third round showdown with fellow Frenchman Ugo Humbert, who was a 3-6, 6-3, 6-2 winner over American Bjorn Fratangelo at the ATP 250 event.

Next up for hard-hitting Canadian Shapovalov is a meeting with Serbian teenager Miomir Kecmanovic in the round of 16 on Wednesday.

Lee Duck-hee, who on Monday became the first deaf player to win a match in the main draw of an ATP event, fell to rising Polish Hubert Hurkacz 4-6, 6-0, 6-3.

Russian Andrey Rublev, fresh off his impressive win over Roger Federer at the Cincinnati Masters, was forced to play two matches on Tuesday due to rain on Monday but won both and will meet big-serving American Sam Querrey.

Italian Lorenzo Sonego, Serbian Filip Krajinovic, Spanish veteran Feliciano Lopez and young Americans Frances Tiafoe and Steve Johnson were among those who also booked their tickets to the third round on Tuesday.

Strycova, who reached the Wimbledon semi-finals last month, battled for nearly two hours before losing to Pera, who is ranked 37 rungs below her in the WTA rankings.

"I was more focused on my game and finding that balance that is so important for me to play well," the 24-year-old said. "It's finding the balance between being too aggressive and being too passive."

"I think I was just able to find my balance and find the rhythm with my feet in the second set and keep going in the same way in the third."

Strycova's poor service game cost her, with a double fault in the first game of the final set opening the door for Pera, and the Czech will have to improve quickly if she is to make an impact at the U.S. Open, which starts next week.

Pera will next face another Czech player in fifth seed Katerina Siniakova, who advanced after her Russian opponent Anastasia Potapova dropped the opening set 6-0 and retired midway through the second set 3-0 down.

Young Indian shooter Areeba Khan on Wednesday signed off at the 24th position in women's Skeet competition at the Shotgun World Cup in Lahiti, Finland.

Areeba, who hails from Aligarh, finished with a round of 24 out of 25 to be short of the top score of 118, recorded by American Caitlin Connor, by nine hits.

Meng Wei of China won the gold with a Tokyo Olympic quota to boost in the event. The second quota place went to Germany's Nele Wissmer who finished fifth.

Areeba's teammates Saniya Sheikh and Kartikki Singh Shaktawat returned with scores of 98 and 96 for 63rd and 65th place finishes respectively.

In men's skeet, Indian trio of Mairaj Ahmad Khan, Anantjeet Singh Naruka and Angad Veer Singh Bajwa were placed 64th, 73rd and 91st with scores of 46, 45 and 44 respectively after two rounds of qualification.

Russian race walker Sergey Bakulin has been suspended for eight years for an anti-doping violation, the Athletics Integrity Unit (AIU) said on Wednesday.

Bakulin, who has served a doping suspension in the past, had already been stripped of his 50 km world title from 2011.

The AIU, which oversees integrity issues in international athletics, including doping, said the ban was linked to abnormalities in Bakulin's biological passport.

Bakulin had been coached by Viktor Chegin, who was suspended for life in 2016 after a report commissioned by the World Anti-Doping Agency (WADA) found there had been a "systematic doping regime" under Chegin's influence at the training facility where he was head coach.

Reuters reported in June that Chegin had won state contracts to provide security at the facility after his ban, giving him access to the athletes training there.

The Russian athletics federation later said the country would cancel the state contract between Chegin and the facility because his access to athletes is a "sensitive matter for anti-doping services."

Russia's athletics federation has been suspended since a 2015 WADA-commissioned report found evidence of state-sponsored doping in the sport.

Global athletics ruling body the IAAF has nonetheless authorised some Russians to compete as neutrals after having demonstrated they are competing in a doping-free environment.

The 'World Police and Fire Games-2019', an Olympic-style competition with 10,000 athletes representing law enforcement, fire-fighters and officers from corrections, probation, border protection, immigration and customs from over 70 countries competing in more than 60 sports, were held from August 8 to 18 in Chengdu city.

The CISF, in a statement, said it has a comprehensive sports facility that seeks to foster the culture of sports in the force and to ensure fair and reasonable opportunities to talented sports personnel so that they can fully realise their potential and win laurels for the organisation and the country.

US athletes Race Imboden and Gwen Berry have been placed on probation for 12 months for their political protests at the Pan Am Games, USA Today reported on Tuesday.

Fencer Imboden took a knee and hammer thrower Berry raised her fist when the US national anthem played during their medal ceremonies earlier this month, violating an agreement U.S. athletes sign before competing internationally.

The probation means both athletes will still be eligible to compete at next year's Tokyo Olympics.

Sarah Hirshland, CEO of the US Olympic and Paralympic Committee, wrote to both athletes informing them of the decision and said future protests would be met with stiffer punishments. The letters were obtained by USA Today Sports.

The Committee was not immediately available for comment when contacted by Reuters.

Hirshland said the two athletes were considered to be in a "a probationary period for the next 12 months."

"This means you could face more serious sanctions for any additional breach of our code of conduct than might otherwise be levied for an athlete in good standing," she wrote.

After his protest in Peru, Imboden took to Twitter to explain his actions and to "call for change".

"This week I am honored to represent Team USA at the Pan Am Games, taking home gold and bronze," he wrote.

"My pride however has been cut short by the multiple shortcomings of the country I hold so dear to my heart. Racism, gun control, mistreatment of immigrants, and a president who spreads hate are at the top of a long list."

"I chose to sacrifice my moment today at the top of the podium to call attention to issues that I believe need to be addressed. I encourage others to please use your platforms for empowerment and change."

Athletes taking a knee has become a way of protesting injustice in the United States.

The protest was first started in 2016 by former San Francisco 49ers quarterback Colin Kaepernick to draw attention to social injustice and police brutality.

Berry's raised fist recalled memories of what was perhaps the Olympics' most famous protest when sprinters Tommie Smith and John Carlos raised their clenched fists during the 200 metres medal ceremony at the 1968 Mexico Summer Games. 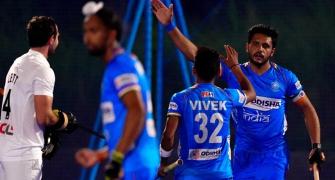