News
Business
Movies
Sports
Cricket
Get Ahead
Money Tips
Shopping
Sign in  |  Create a Rediffmail account
Rediff.com  » Sports » She is 92, a cancer survivor and she has now run into record books! 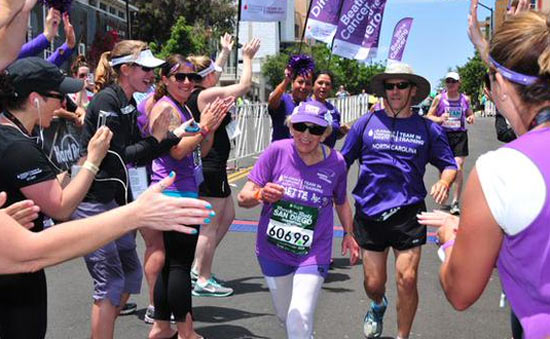 Harriete Thomson crosses the finish line amidst cheers as she completes the Rock 'n' Roll Marathon in San Diego on Sunday. Photograph: All India Radio/Twitter

A 92-year-old cancer survivor rocked her way into the record books Sunday, becoming the oldest woman to finish a marathon.

"I'm fine, they're really pampering me here," Thompson said in a firm, joyful voice as people all around her shouted congratulations.

This was her 17th Rock 'n' Roll Marathon and, by far, the hardest.

"It's always harder but this year has been a bad year for me," she said, adding her husband died in January, following a lingering illness and she battled a staph infection in one of her legs.

"I couldn't train very well because my husband was very ill and I had to be with him for some time and then when he died in January I had some treatments on my leg," she said.

"I was just really thrilled that I could finish today."

The oldest woman to previously complete a marathon was Gladys Burrill, who was 92 years and 19 days old when she completed the 2010 Honolulu Marathon.

Thompson is 92 years, 65 days old, according to race organisers. 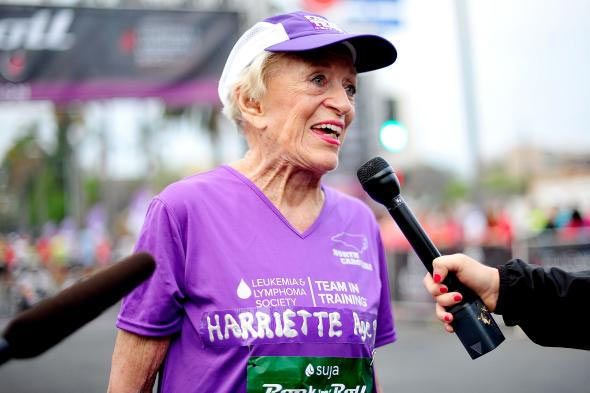 Despite her training woes, she nearly matched her finish time of last year, which was 7 hours, 7 minutes, 42 seconds.

That set a record for a woman 90 or older, shattering the old one by more than an hour and a half. A classically trained pianist who played three times at Carnegie Hall, Thompson says she mentally plays old piano pieces she had performed to help her get through the 26 miles, 385 yards.

She didn't begin running marathons until she was in her 70s, after a member of her church approached her about being one of her sponsors in the marathon to raise money to fight leukemia and lymphoma.

"At that time I had lost several people in my family to cancer and I said, 'Oh, maybe I should do that’," she recalled.

"When I got out there the first year I just planned to walk it, but everybody else was running so I started to run with them."

She isn't sure if she'll run again next year. But after last year's race she wasn't sure she'd run this one either.

She added she enjoys raising money for cancer research and figures the competition has helped keep her healthy.

"I don't think I'd be living today if I didn't do this running," the cancer survivor said.

"I'm helping them and they're kind of helping me."