AS Roma slipped up in their pursuit of Serie A leaders Juventus as they salvaged a 1-1 draw at mid-table Palermo on Saturday thanks to a second-half Mattia Destro equaliser. 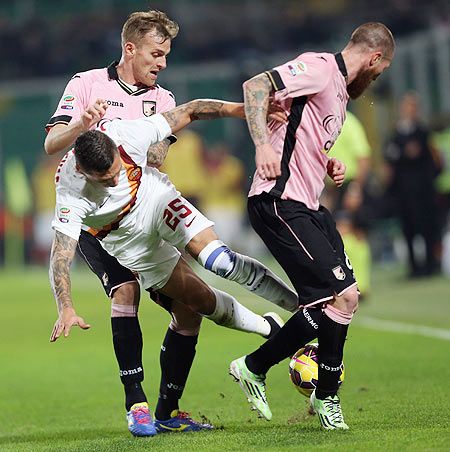 The result, Roma's third draw in four matches, leaves Rudi Garcia's side two points behind Juve on 41 points and if the champions win at home to Verona on Sunday, the side from the capital will be five adrift for the first time this season.

In the earlier game, Inter Milan's Slovenian goalkeeper Samir Handanovic was in brilliant form to help them secure a 0-0 draw at lowly Empoli.

At Palermo, Roma were seemingly in the same mood as last Sunday's derby with Lazio, allowing their opponents to dominate before waking up belatedly after the break.

It took Palermo 100 seconds to take the lead through Paulo Dybala, after an ill-advised pass from Davide Astori went straight to Franco Vazquez's feet.

The Argentine midfielder simply slipped the ball to Dybala, who easily scored his 10th goal of the season.

It took Roma until the 54th minute to equalise when Kevin Strootman knocked down a Miralem Pjanic free kick, allowing Destro to slide the ball past a diving Stefano Sorrentino.

Palermo appeared to lose energy after that but still had the best chance to steal all the points when Dybala was denied at close range by Roma goalkeeper Morgan De Sanctis.

Garcia threw on talisman Francesco Totti in the closing minutes hoping that his captain, who had battled flu this week, might find the winner. Roma's best chance, though, saw Jose Holebas's 20-metre shot fly wide.

At Empoli, Inter missed the chance to go sixth and apply more pressure in the race for a Champions League spot.

The stalemate moved them into ninth place, still five points behind third-placed Lazio, who occupy the final Champions League qualifying spot and who host Napoli on Sunday.

Inter had their chances but had to be thankful for three excellent second-half saves in 10 minutes from the inspired Handanovic.

Image: Palermo's Luca Rigoni (left) and Michael Morganella compete for the ball with Roma's Jose Hobales during their Serie A match at Stadio Renzo Barbera in Palermo on Saturday

© Copyright 2021 Reuters Limited. All rights reserved. Republication or redistribution of Reuters content, including by framing or similar means, is expressly prohibited without the prior written consent of Reuters. Reuters shall not be liable for any errors or delays in the content, or for any actions taken in reliance thereon.
Related News: Palermo, AS Roma, Rudi Garcia, Paulo Dybala, Empoli
SHARE THIS STORYCOMMENT
Print this article