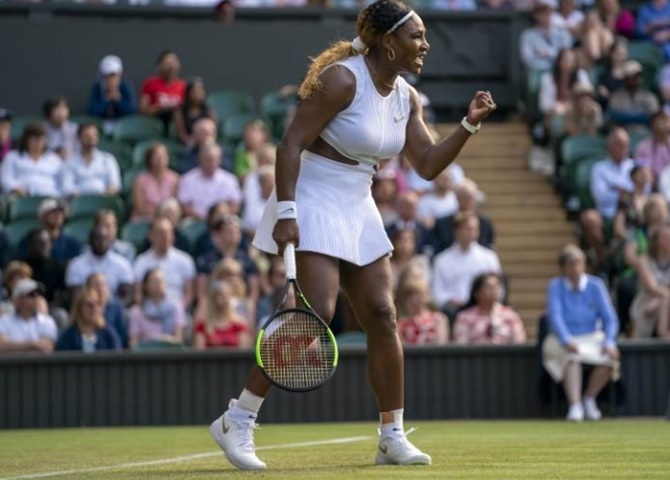 Seven-time champion Serena Williams endured an unlikely scrap in her Wimbledon opener and will look to shake off more rust in the second round on Thursday when she faces another qualifier in 18-year-old Kaja Juvan.

Williams, who had been limited to seven matches since the Australian Open in January because of injuries, fought off 31-year-old Italian Giulia Gatto-Monticone 6-2, 7-5 to progress.

The American, chasing a record-equalling 24th Grand Slam crown, could face another potentially tricky test against an opponent at the other end of the age spectrum.

“I think right now I have to have every match count, like 10 matches, because I haven’t had a ton of matches this year,” Williams told reporters.

“I learned a lot from that match, just going to keep the momentum going... to try to keep the edge... was important.”

Juvan, a singles and doubles gold medallist at last year’s Youth Olympic Games, will take inspiration from fellow teenager Cori Gauff who stunned Williams’s sister Venus in the opening round before beating Magdalena Rybarikova on Wednesday.

Australian Nick Kyrgios renews his rivalry with Rafa Nadal in a blockbuster second-round encounter on Centre Court while Roger Federer, who is on a quest to seal his ninth Wimbledon title, takes on Briton Jay Clarke.

Regular as clockwork, Djokovic eases into third round 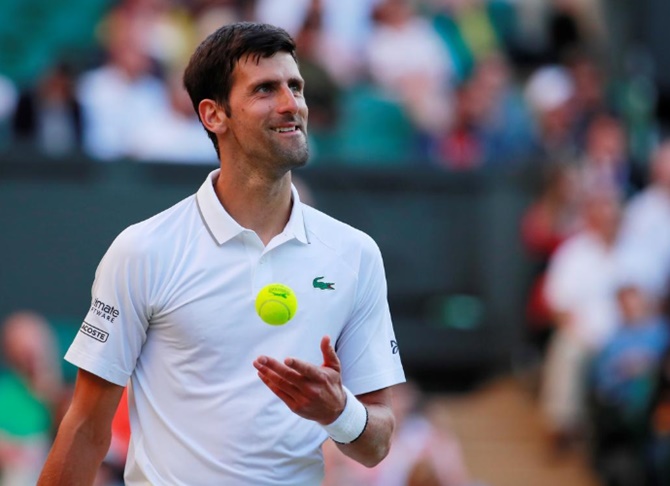 IMAGE: Serbia's Novak Djokovic celebrates winning his second round match against Denis Kudla of the US. Photograph: Andrew Couldridge/Reuters

Novak Djokovic trails Roger Federer and Rafael Nadal in many of the game’s most important metrics, but when it comes to consistently reaching the third round at Wimbledon, which he achieved with dazzling ease on Wednesday, he leaves his rivals in his wake.

That put him in the last 32 at the All England Club for the 11th straight year, a professional-era mark only surpassed by American Jimmy Connors — and one more than the game’s most decorated player Federer.

Consistency has become the Serb’s hallmark. While he may lack the shotmaking brilliance of Federer or the raw power and energy of Nadal, he rarely allows his level to slip below a supremely high watermark.

Which makes slip-ups against those plying their trade at the level of Kudla an exceptionally rare occurrence.

“Consistency was one of the keys and focus points of my Grand Slam career going back 10 years — I always aim to play my best in Grand Slams,” he said after a one-hour-and-33-minute stroll that only occasionally flickered into life as a contest.

“I guess the quality of tennis that I produce in the slams is pretty high. That’s what allows me to have the results like this.”

The world number one had only once lost to a player lower than the 111th-ranked Kudla in a Grand Slam — to Denis Istomin at the 2017 Australian Open — and there was never any chance of a repeat on Wednesday.

Things had threatened to turn ugly for Kudla when he lost the first five games, but he fought his corner to ensure the score stayed respectable and the match remained competitive.

The holder and four time champion allowed a few match points to go begging before finally wrapping up victory to set up an encounter with Poland’s 48th-ranked Hubert Hurkacz.

At this stage of the tournament, few would bet against Djokovic winning a 16th Grand Slam title next Sunday and the world number one certainly sounds confident."

“Ambitions are high and I’ve been fortunate in my career to do so well in Slams,” he said.

“I have to think only about the next challenge and take things one step at a time.”

Teenager Gauff backs up Venus win to reach third round 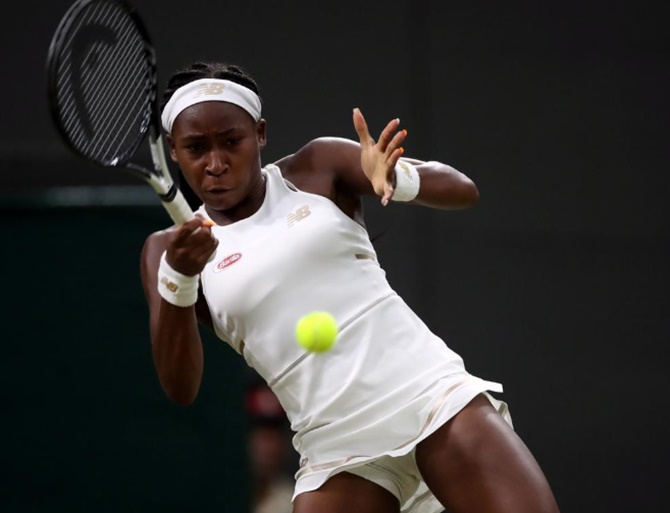 IMAGE: Cori Gauff of the US in action during her second round match against Slovakia's Magdalena Rybarikova. Photograph: Carl Recine/Reuters

American 15-year-old Cori 'Coco' Gauff showed her stunning first-round defeat of Venus Williams was no flash in the pan as she outclassed Magdalena Rybarikova 6-3, 6-3 to reach the third round of Wimbledon on Wednesday.

Gauff, the youngest player to reach the Wimbledon women’s singles main draw via qualifying and the youngest to win a round since 1991, gave the 30-year-old former semi-finalist a torrid time as her fairytale debut continued under the Court One roof.

Gliding effortlessly across the grass she took charge of the match by breaking her 139th-ranked Slovakian’s serve to love in the sixth game and was in control thereafter.

Rybarikova, a semi-finalist in 2017, might have hoped for Gauff’s level to dip but it never looked likely as the teenager remained ice cool and composed to close in on victory.

Sensational as victory over her idol and five-time champion Williams was, the way she backed it up was arguably more impressive as she appeared completely impervious to the hullabaloo she has caused at the All England Club.

In two matches she has made 18 unforced errors and barely put a foot wrong.

“I just still can’t believe she is 15,” American great John McEnroe said in his summary for the BBC.

But even Gauff herself told reporters after the match she was the real deal: “You can kind of fake it till you make it. But I’m not faking it, at least right now.”

Incredibly, this time last week Gauff was preparing for a science exam having jetted into London at short notice after being handed a wildcard for the qualifying event.

After a whirlwind week she now finds herself one win away from becoming the youngest player to reach the fourth round at Wimbledon since Jennifer Capriati, aged 14, in 1990.

After beating Venus, Gauff is already receiving the sort of attention that surrounded Capriati as she burst onto the scene. “I wasn’t expecting any of this. A lot of celebrities were DM’ing, posting me. I’m kind of star struck. It’s been hard to reset,” she told reporters.

“There’s so much going on. I’m still shocked that I’m even here,” world number 313 Gauff said after coming off court and being initially told by the reporter she was next to face Caroline Wozniacki when it is actually Slovenian Polona Hercog who beat another former American prodigy Madison Keys.

The way she has taken to the world’s biggest tennis stage suggests she might be here a while longer yet.

“This is not the first time she has had to deal with pressure, but she surprises me with some of the fight she comes up with,” Gauff’s father, and coach, Corey told Reuters.

“My words too her today were just keep it simple and make sure you hit the ball hard, and hit it in the corners.”

It took her no time at all to carry out those instructions, ripping a crosscourt backhand winner as she held serve.

Another graceful backhand sealed her next service game and in the she raced forward to an attempted drop shot to whip an angled forehand on to the line — offering a Serena Williams-like “c’mon!!” in response.

Rybarikova, who has dropped to 139th in the rankings, was already beginning to feel the pace and in the sixth game Gauff turned up the dial her groundstrokes to secure the first break.

Serving for the set Gauff crunched two backhand winners on her way to holding to love.

Gauff broke early in the second set and although Rybarikova tried every spin in her armoury to try and break the youngster’s rhythm, resistance proved futile.

Asked what advice she had been given by her parents Corey and Candi, who cheered each winner from the players’ box, she said it was simple.

“They just told me, you have another match. The tournament’s not over,” she said. “My goal is to win it.”

© Copyright 2020 Reuters Limited. All rights reserved. Republication or redistribution of Reuters content, including by framing or similar means, is expressly prohibited without the prior written consent of Reuters. Reuters shall not be liable for any errors or delays in the content, or for any actions taken in reliance thereon.
Related News: Cori Gauff, Denis Kudla, Serena Williams, Venus Williams, Magdalena Rybarikova
SHARE THIS STORYCOMMENT
Print this article 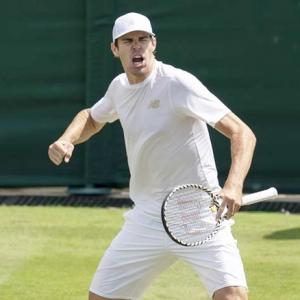