The NSCI dome in Mumbai, venue of the first-ever NBA match in the country, had everything in place to host a blockbuster.

Adding to the carnival-like atmosphere were the school children, special invitees on the night, that lit up the venue. 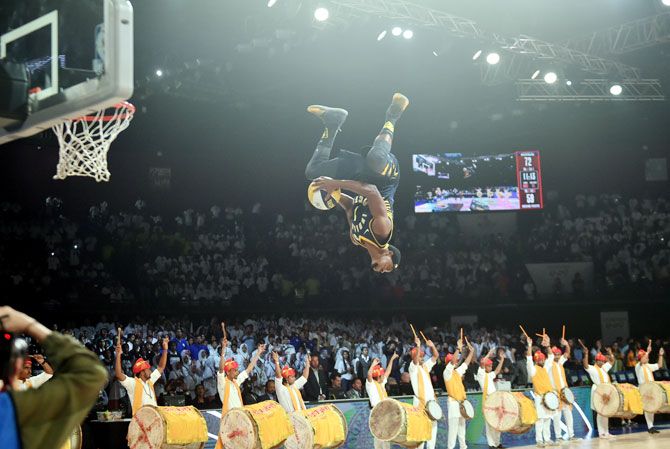 IMAGE: A member of the Indiana Pacers Powerpack performs a dunk off a trampoline, at the half-time show, during the during the NBA pre-season game played between Sacramento Kings and Indiana Pacers in Mumbai on Friday. Photograph: Mitesh Bhuvad/PTI Photos

Hoardings bearing pictures of Indiana Pacers’ Miles Turner and Malcolm Brogdon alongside Sacramento Kings’ De’Aaron greet you at the National Sports Club of India, host of the first-ever NBA games to be played in India.

The words #NBAinmybackyard are printed on the same hoardings.

#NBAinmybackyard is a campaign that was started to promote the two NBA pre-season games being played at the NSCI dome in Mumbai. Right besides the said hoarding, outside the dome, are serpentine queues of kids awaiting their turn to enter the venue.

One can’t help but overhear two over-excited kids speak, where one asks the other a surprising question: ‘Which teams are playing today?' To which the other replied: ‘Pata nahi yaar, basketball game hai’.

The kids from CP Goenka school, Thane, did their research on the NBA and its players before coming for the match.

The irony of the situation aside, the atmosphere at the first NBA game being played in India was nothing short of electrifying. The arena was buzzing with nearly 3000 kids from over 70 schools, who were special invitees, watching the historic match. From 8-9 year olds to teenagers, they all made the venue come alive.

It’s examination season in most schools across the city, but that was no deterrent.

“We answered an exam this morning and we have another one tomorrow. But because we like basketball and the NBA, we took this opportunity,” said a student of Fatima High School in the eastern suburb of Ghatkopar.

Inside, the dome was reverberating with chants of ‘let’s go Pacers, let’s go,' and moments later there were screams of ‘let’s go Kings’, while the loudspeakers blared Bollywood hit Swag se karenge sab ka swaagat. 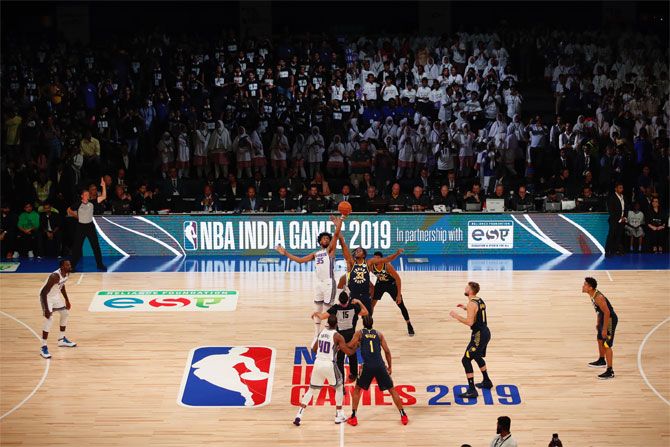 IMAGE: The match between Indiana Pacers and Sacramento Kings is tipped off at the NSCI Dome in Mumbai on Friday. Photograph: NBA India

And what a fitting welcome for the NBA it was, with NBA great Larry Bird sitting courtside and other NBA royalty in the house -- former NBA player Jason Williams and NBA global ambassador Dikembe Mutombo -- the national anthems of India and the USA were sung by comedian and Youtube sensation Bhuvan Bam and singer Monica Dogra, respectively. There was also a sprinkling of Bollywood glitter with Rahul Bose, Sonam Kapoor and John Abraham in the audience.

On the sidelines of the match were all those ingredients that made it a truly NBA experience. There were the cheerleaders, the mascots, and a dance group that had some crazy moves.

At half time, out came a group of percussionist from Pune, Rudragarjana, beating their dhols, while Power Pack, a group of dunkers from Indiana, dunked their way into the hearts of the spectators, jumping off trampolines and dunking the ball in acrobatic fashion.

The match itself lived up to its billing. As promised by both coaches on the eve of the match, the intensity was high. It didn’t matter that it was a pre-season game, played in front of school-goers. There was pace, there were dunks, there were some sexy lay-ups, there was overtime and there was some blood too! 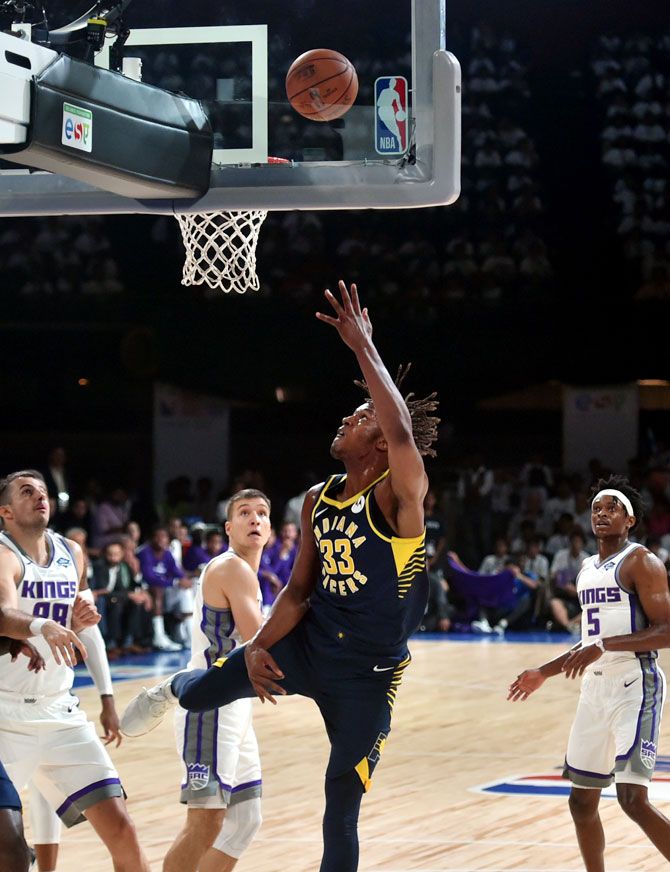 The first half clearly belonged to the Kings as they raced to a 39-29 lead -- Harrison Barnes becoming the first to open the scoring in an NBA match in India with a three-pointer.

There was some blood if not much drama in the first quarter as Domantas Sabonis was left bleeding from the right ear as he was elbowed by an opponent while attempting a basket. He went in, got first aid and took his place back later in the game.

The first half also saw some really good offensive play from the Kings as they went into the break with a 72-59 lead. But the Indiana Pacers rallied to first tie the match at 118-118 and then take the match into over-time. The Pacers finally snatched victory from the Kings in the dying moments of over-time to win 132-131 and take the first of the two pre-season games.

“This was our first pre-season game, so a lot of things we were doing tonight was on the fly. We were introducing some new sets to our guys, down the stretch. I thought our defence picked up in the 2nd half.

“In the first half, we gave up 63 points, so our defence wasn’t really there. The 2nd half, including the over-time, we gave up 59 points so, I was really impressed with our guys stepping it up with a defence on the floor. That 3rd quarter, we established our defence and were able to score some points in that 3rd quarter. The 2nd half, including over-time, we showed up and established our identity,” said Pacers’s coach, Nate McMillan.

Sacramento Kings Luke Walton said his team need to work on rebounding and on the defence.

“We’ll get the guys out tomorrow’s game, that didn’t play tonight, take a look at them tomorrow to see how they look. We had a very good chance of winning the game... just that they made more plays than we did down the stretch,” Walton said.

Acknowledging the kids and their energy, McMillan said:  “It was good energy out there. The kids were loud, they were into the game. The guys fed off of that energy and tried to compete even harder to win the game.”

Walton seconded McMillan: “I think it was awesome. NBA basketball in India, in a crowd full of kids that have come through junior NBA… whoever is scoring they are cheering for them. I heard Kings chants, I heard Pacers chants.”

“It was a great atmosphere. Those kids will remember it for the rest of their lives. Us coming down here, playing basketball at the highest level, in India like coach said, it’s big time. I’m enjoy myself here,” said Buddy Hield.

This match will certainly stay with the kids, and one takeaway from the match for many who witnessed history on Friday was: “The Indiana Pacers not giving up, fighting till the end and winning the match eventually,” says a girl from a Kurla-based school, who revealed that she had never watched a basketball game before Friday’s NBA experience.

Bring on some more #NBAinmybackyard we say. 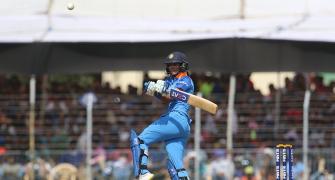 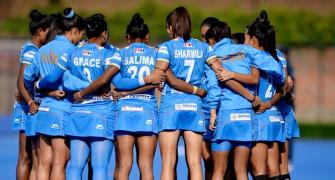 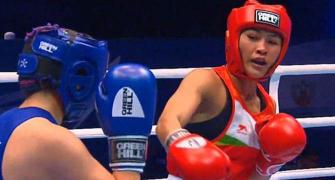 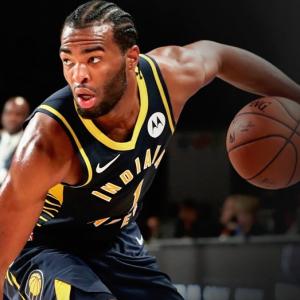