India had earlier defeated Bangladesh 3-0 in their opening encounter.

Reena Roy Devi doubled the score in the 22nd minute as India went into the interval enjoying a two-goal cushion.

Changing over, Parameshwori scored twice, first in the 50th mintue and then in the 65th. Pinky Bompal completed the rout in the 52nd minute.

India who have six points from two matches next play Bhutan on Tuesday. We are going to improve with every game: Koevermans
Australia slump below Ireland in T20 rankings 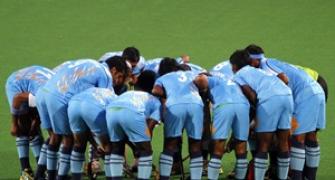 Our hockey is dead, says Claudius India play out a goalless draw with Nepal in Nehru Cup